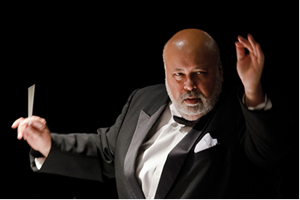 The pops concert à la Arthur Fiedler is alive and well in Durham. The Durham Symphony Orchestra, under the magical baton of William Henry Curry, set up in the Durham Armory with Christmas decorations, high spirits, and special guests. DeJuan Hoggard of ABC 11 Eyewitness News made introductions and announcements with his impressive trombone-like voice. The United Strings of Color – Kennedy Mitchell and Cameron Thomas, violins, Kenza Ngatchou, viola, and Lexi Etienne, cello – performed seasonal quartet music in the lobby before the concert and joined the orchestra for two selections on the concert program.

The audience was seated at tables; refreshments and socializing during the intermission added to the spirit of the evening. The congenial Maestro Curry and members of the orchestra mingled casually with the audience as well.

But, of course, the music was the attraction. Most of the selections on the program were brief, lively, and familiar. The first piece was a stately arrangement of "Adeste Fidelis" (O come all ye faithful) by Arthur Harris. The Durham Symphony filed the armory with glorious sounds, well balanced and elegantly expressed.

Next on the program were two compositions with the same title from the same family. We heard "Sleigh Ride" by Leopold Mozart and then by his son, Wolfgang Amadeus Mozart. Both are relatively simple pieces, and both have a bit of the Mozart charm. Leopold's "Sleigh Ride" was published as Divertimento in F and was popularly known as "Musical Sleigh Ride." Wolfgang's is one of his Three German Dances, K.605.

"Hark the Herald Angels Sing" was written by Charles Wesley, the brother of John Wesley, the founder of the Methodist denomination. The melody was composed by Felix Mendelssohn. George Whitefield, another Methodist founder, changed the first line and shortened the text to the form that is familiar today. Curry conducted the DSO in a version arranged by Ted Ricketts, who worked for 24 years as a music director for Walt Disney. The arranger takes the original melody and essentially recomposes it in many differ ways. Ricketts' version opens with a big brass fanfare and develops the melody, as the text suggests, along the lines of joyful praise. It closes with a marvelous triumphal final cadence. All of this was brought to life through the skills of Maestro Curry and the individual musical artists performing together as the Durham Symphony Orchestra.

Assistant conductor and principal second violinist Shelley Livingston came to the podium to conduct the next two selections. She led the orchestra in a delightful and spirited "Polonaise" from Nicolai Rimsky-Korsakov's opera Christmas Eve. It was an enthusiastic and pleasing performance. Next Livingston guided the orchestra in the "Prelude" and "Waltz of the Flowers" from Tchaikovsky's always charming and scintillating Nutcracker. It was such a pleasure to hear! There is nothing quite like hearing a familiar masterpiece in a live performance like this.

Curry returned to the podium for the second half of the concert, which began with a rousing arrangement of Jerry Herman's "We Need a Little Christmas." Oakley Lyon was the arranger.

The Maestro then introduced the next work, "Maoz Tsur" (Rock of Ages), from A Chanukah Celebration, composed by former colleague and bass trombonist with the North Carolina Symphony, Terry Mizesko. It opens with a soft tympani drum roll. An oboe sung over shimmering strings is followed by other winds developing the theme. More instruments join in as the dynamic increases. The ending is mystical and outstanding.

Two of Curry's main interests are American composers and women composers. Peggy Stuart Coolidge (1913-81) was an American composer, pianist and conductor who never gained wide acceptance in her native country but was quite popular in Europe, especially in Russia. On this program, we heard a fine performance of her "Dance No. 1," from Pioneer Dances. It is a light, delightful composition with some reflections of Copland's "Hoedown."

The singalong portion of the concert was "Christmas Memories Singalong," an arrangement by Bruce Chase. It includes a handful of Christmas carols and songs and was nicely sung by the audience.

Leroy Anderson's "Christmas Festival" provided a joyous finale for an altogether pleasurable evening. Enthusiastic applause was rewarded with Anderson's biggest light classical hit, "Sleigh Ride," composed in 1948 and heard everywhere since then but never better than tonight, with all the sound effects: bells, whip, and neighing horse. It was an outstanding holiday pops!