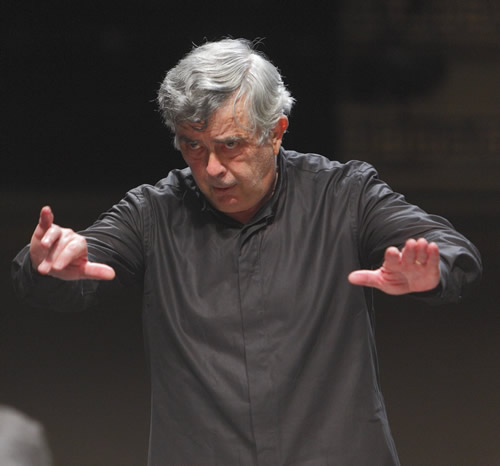 The program was titled "Beyond Opera," and for it, the Chamber Orchestra of the Triangle brought in some heavy hitters (figuratively speaking). On the menu was non-operatic music by Rossini, Wagner, and Bizet, folks best known for their works for the stage. In fact, the Rossini was the overture to one of his best-known operas, although to tell the truth it's rarely produced. When was the last time William Tell was presented anywhere in America? (Answer: maybe Albuquerque, 2017.) The Wagner entry, the five exquisite Wesendonck-Lieder, WWV 91 (originally Fünf Gedichte für eine Frauenstimme, and originally for voice and piano – presumably played here in orchestrations by Felix Mottl), is not all that unusual, although it was interesting to note during Mina Lee's preconcert lecture that many attendees had never heard the songs performed live, in concert; as she related, these are the only texts Wagner set that were not written by Wagner himself. And then there was Bizet's buoyant, spirited, joyful, optimistic Symphony in C – and immensely popular work that in recent decades has receded somewhat from concert stages.

The Wagner might not have been, for the scheduled singer, ASU's Mary Gayle Greene, was indisposed, and singers of these songs don’t exactly grow on trees, but Greene became ill soon enough to allow COT to find a replacement, and that replacement came from UNC – where Greene had actually begun work in our state as an artist-teacher some years ago, before she headed to Western NC. That replacement was LaToya A. Lain, whose Wagnerian experience, huge voice, and commanding presence made her an ideal fill-in; she had in turn been hired in Chapel Hill in the wake of former department chair Louise Toppin's departure for Michigan in 2017….

The COT is a mainstay of Triangle concert programming so little need be said about its collective artistic prowess under the baton (or non-baton, as he eschews the use of one…) of Lorenzo Muti, the ensemble's long-time artistic director (its second such; he relieved the estimable George Taylor in 1988. He still conducts with all the vigor and energy he displayed when he arrived here to lead the Duke Symphony Orchestra; we are richly blessed by his presence. And his family. His spouse is the COT's principal flutist, and their son, Niccoló, is currently the executive director, assistant conductor, and occupant of the Giorgio Ciompi chair, one of many endowments the orchestra enjoys.

The orchestra listed 43 members on the published roster, of whom four – the string principals – are members of the Verona Quartet, currently the COT's quartet-in-residence (and already spreading the word and the music too.) That this has been one of the treasures of area musical life is self-evident. Incisiveness, precision, immaculate ensemble, gorgeous phrasing, and splendid dynamic control are hallmarks of its work. These qualities were readily apparent in the opener, the William Tell Overture, crisply led by Niccoló Muti.

In the Wagner, Lain poured forth radiant tone and clean diction in the five mostly-somber and reflective songs. (There were fine program notes by the pre-concert speaker, but no texts or translations, so some listeners were surely left in the dark by the music, beyond its overtly romantic nature – unless attendees knew Tristan und Isolde, whose melodies these lieder prefigure.) The accompaniments were as wonderful as the vocalism, and Lorenzo Muti kept everything in near-perfect balance.

This was true as well when the concert continued with Bizet's quite magical Symphony in C. The senior Muti has lost none of his spirit – this was utterly charming and delightful, from start to finish, and when it ended, the applause was immediate and heart-felt – for the leader, the principals, the strings (such warmth the violas and cellos and basses projected!), and the glorious winds and brasses. Well done!

The next chamber orchestra concert in this series will be on Jan. 12. The next Verona concerts that we know about will be on Feb. 6 in Durham (location TBA) and on Feb. 18, in Winston-Salem. Stay tuned!

The aforementioned pre-concert lecture, presented in the Connie Moses Ballroom of the Carolina Theatre, was offered in cooperation with the Triangle Wagner Society, which missed a golden opportunity to tell attendees about its purpose and programs – but chances are most of the people there already knew.