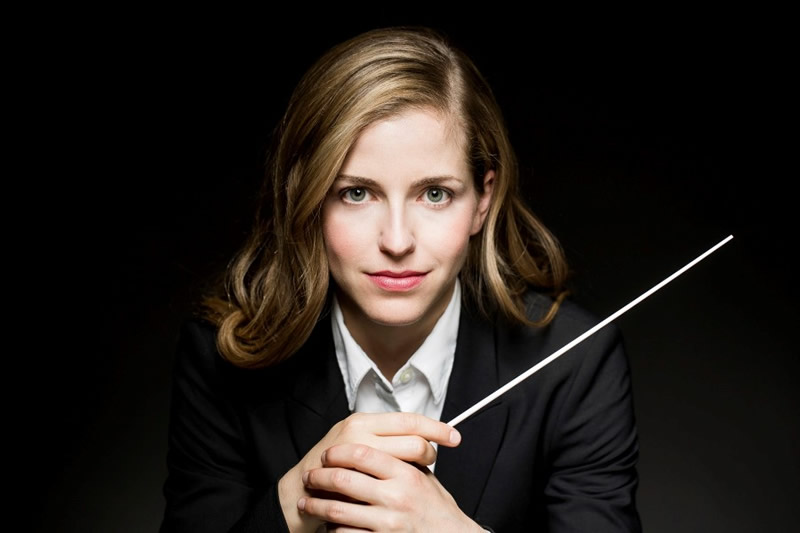 It's likely that many in the audience had never heard any music by the first two composers on this program: Lili Boulanger and Ethel Smyth. Boulanger's D'un soir triste ("Of a sad evening"), one of the last works she was able to write in her own hand before her death at the age of 24, is an evocative score, not only of sadness or even of her own grave illness but also of beauties which life continues to afford even when darkness approaches. With echoes of Debussy (never over-shadowing her own musical language, which had already made Boulanger the first female winner of the Prix de Rome), this music was hauntingly and sensitively played by the NC Symphony under the guiding hands of conductor Karina Canellakis.

The first part of the program concluded with "On the Cliffs of Cornwall," the Prelude to Act II of The Wreckers, an opera by Dame Ethel Smyth. This music, like La Mer and Vaughan Williams' Sea Symphony, among others, is also an evocative piece, with its musical depiction of the ocean that surrounds the British isles. It isn't memorable music, however, being reminiscent of a good score for a motion picture or perhaps for a television drama like Poldark, itself set near the Cornwall cliffs. Canellakis brought a strong rhythmic drive which produced an excellent performance.

After intermission, we were immersed in the titanic music (244 pages in the orchestral score) of Gustav Mahler's fifth symphony ("Symphony No. 5 in C-sharp minor" on the program, although the Leipzig-published 1904 score says "...in C-sharp minor / D Major"). Its five movements, lasting some seventy minutes, total, constitute the first of Mahler's symphonies that was not based on one of his songs and contained no vocal/choral parts. Having no non-musical program as a guide, the listener is caught up in dramatic musical chiaroscura. The work begins with a funeral march (in C-sharp minor) and ends in a blaze of D Major glory, with an absolutely schizophrenic Scherzo in its midst. The second movement was, as marked, "violently agitated, with great vehemence," while the famous Adagietto fourth movement was lovingly and beautifully played by the strings and harp.

The fifth movement, with its bow to some musical forms not hinted at in the rest of the work (rondo and fugue), requires the utmost virtuosity from the entire orchestra. The NC Symphony was equal to the task in this as in the whole of this deeply-emotional, rhythmically-exciting work, as Canellakis danced, cajoled, caressed, and commanded the augmented numbers of the orchestra through a performance that brought the audience to its feet with bravos ringing through the hall. This was, indeed, a bravura performance that brought out the finest playing from every member of the NC Symphony.

While every member of the ensemble deserves praise, special applause was given to obligato hornist Rebekah Daley and the entire French horn section, who were no less than superb. Move over, Chicago Symphony brass, you've got real competition here!

Canellakis' first appearance with the NC Symphony was several years ago, in a summertime concert at Cary's Koka Booth Amphitheater. She was a fine musician then but has quickly become a fine conductor. She belongs on the NC Symphony's short list as it searches for a new music director to succeed Maestro Llewellyn when he becomes conductor laureate.

The program will be repeated on Saturday, November 2, at 8:00 PM, in Meymandi Hall. See our sidebar for details.