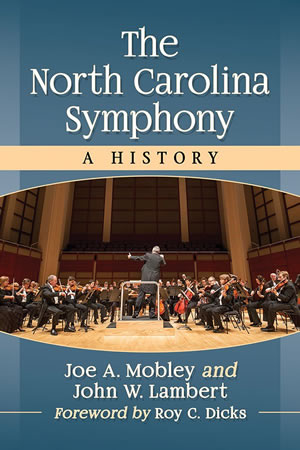 The North Carolina
Symphony: A History

The North Carolina Symphony: A History, by Joe A. Mobley and John W. Lambert, with a forward by Roy C. Dicks, tells the exhilarating journey of how the North Carolina Symphony came to be in 1932, thanks to Raleigh-born flutist Lamar Stringfield, who had the vision and then became its first conductor. Now, in 2019, a search is underway for the next conductor to replace Grant Llewellyn. The years between saw the 34-year leadership of Benjamin Swalin with critical help from his wife, Maxine, followed by John Gosling and Gerhardt Zimmerman. This book is a remarkable chronicling of the lives and activities of this, the oldest continuously state-supported symphony orchestra in the United States.

The authors begin by researching the evolution of various types of music people enjoyed in southern rural states recovering from the Civil War, including church music, folk music, and gospel. Pianos were played in many homes, and traveling troupes featured bands and singers; enthusiasm was growing for classical music and opera. The Moravians were successful music makers, and slowly an increasing appreciation of classical music led to an environment in which the creation of the North Carolina Symphony was possible. The story tells this monumental undertaking with successes and failures along the way. I was particularly intrigued with one of the roadblocks of early times – the lack of venues large enough where musicians and orchestras could perform, which meant that North Carolina was often bypassed by fine orchestras for Charleston and New Orleans with just one exception – Wilmington's 1858 Thalian Hall had ten concerts a year. But when Swedish Nightingale Jenny Lind came through Wilmington en route to Charleston, her manager, P.T. Barnum, wouldn't allow her to sing because the hall wasn't big enough. Opera houses dotted the state and offered plays, musicals, minstrel shows, lectures, or concerts. But for an orchestra, the search for large enough practice and performance space was paramount, and we learn about the inadequate, acoustically inferior spaces available to the orchestra.

Along the journey, qualified musicians were always difficult to secure, and sometimes music students in college programs filled in, to the dismay of their professors who felt they should focus on their studies. Funds were constantly needed to pay the musicians and transport them from the mountains to the coast. Known as the "Suitcase Symphony," the musicians boarded busses and travelled thousands of miles performing in small and large communities alike, including many children's concerts. The dedication to the musical education of children, which was, and is, the hallmark of the NC Symphony, took the orchestra crisscrossing the state to locations deep in the mountains to reach young folks, introduce them to their various instruments, and then play for the children. And, in the early days, these tight schedules were somehow accomplished without computers, fax machines, or cellphones.

Upon his discharge from the Army in 1919 and graduating from Juilliard in 1924, Lamar Stringfield, from his home in Asheville, started setting up local music groups, then Symphony Societies – gathering believers together to reach his dream of a state symphony, although often discouraged by those calling it folly. But he persisted, and the North Carolina Symphony had its first public concert in Hill Hall on the UNC-Chapel Hill campus. The book has many illustrations throughout, including one of Hill Hall, and that first printed concert program, featuring the works of Wagner, Beethoven, Tchaikovsky and others.

The authors, with expansive research and great care, note where and when concerts were held, listing the music performed. They include very interesting biographical information about the internationally acclaimed artists who sang and played with the orchestra through the years. To have these details from myriad sources all under one cover is truly a gift to the state.

In post-Civil War times, H.L. Mencken had belittled southern culture, in a 1917 article likening the south to "The Sahara of the Bozart." But things were changing not only in North Carolina's musical offerings but in literature and art. The North Carolina Poetry Society was established the same year as the Symphony, and from 1924 the NC State Art Society was beginning to collect works of art for what would become the NC Museum of Art. The New & Observer's Jonathan Daniels declared that Weymouth, novelist James Boyd's home in Southern Pines, was the site of the "Southern Literary Renaissance," where famous authors, such as F. Scott Fitzgerald, Thomas Wolfe, and Paul Green met together. Paul Green answered Mencken's disparaging remark in a book of his interviews entitled Watering the Sahara.

That's what The North Carolina Symphony: A History is doing – it waters the Sahara, thanks to the authors' astute and accessible story of the North Carolina Symphony – a book fully realized with chapter notes, bibliography, and index that can serve as a fine reference to all aspects of the Symphony's history and all along the way tells an engaging story. And then there's the surprising account of the time the NC Symphony performed at Carnegie Hall in 1977 with 500+ North Carolinians in tow including Governor Hunt, three former governors, and Duke's 200-voice choir! It begins on page 142....

Note: The author is executive director of the Paul Green Foundation.