Geoffrey Simon to Perform on Flexible Flentrop at St. Stephen's 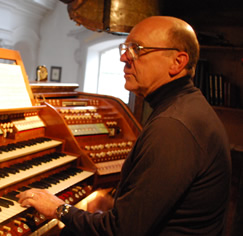 The church's Flentrop organ, declared to be "world class" by Joan Lippincott, is of "classical French" design, meaning that it is modeled after organs in France during the time of Bach. It is ideally suited for the music of such classical French composers as Couperin, Marchand, DeGrigny, Lebegue, Daquin, etc. Were it possible for these composers to sit down at the Flentrop, they would feel instantly at home. Of course, there would be some surprises: they would be intrigued by the flat pedal board where they could use their heels as well as their toes, and they would not find a stop for signaling the pumpers, since an electric blower supplies the wind. But a quick glance at the stops would tell them that the proper sounds could be found for their music.

The Flentrop, however, has proved to be marvelously flexible. Its effectiveness is not limited to the classical French repertoire, as Dr. Simon's eclectic program will demonstrate. The opening piece will be the Grand Dialogue in C by the arrogant bad boy classical French composer Louis Marchand. Here you are certain to hear "the real thing." After that will come Bach's Chorale-Partita on Sei gegrüsset, followed by Franck's Prelude, Fugue, and Variation. We then jump to the 20th century with a set of variations from Norman Dello Joio's Piano Sonata No. 3, arranged for organ by Dr. Simon. A Romantic German work concludes the program, two movements from Karg-Elert's Symphonic Chorale: Jesu, meine Freude.

Tickets ($25) are available at the door with free admission for those 18 or under. A reception follows the recital. The church is located at 82 Kimberly Dr., Durham, NC 27707.