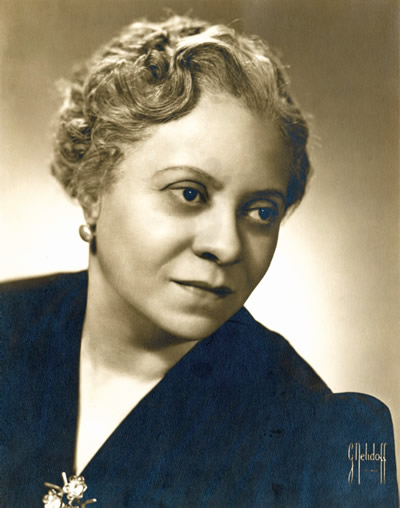 A remarkable program was presented on a cool Saturday evening in Duke's Baldwin Auditorium as distinguished faculty and students of the university's music department joined forces to salute 20 virtually unknown works by Florence Price, the great American composer whose "rediscovery" just a decade ago has set off celebratory bells of joy around the world.

The program encompassed eight songs, performed by soprano Marlissa Hudson, a Duke alumna, and pianist David Heid, curator and producer of this concert; five additional Folksongs in Counterpoint, played by Duke's Ciompi Quartet; a piano sonata, given by new Duke pianist Daniel Seyfried (a product of UNCG, where he studied with Andrew Willis); and six exceptionally beautiful choral works, sung by the Duke Chorale and Chamber Choir (and Women's Choir), variously directed by five adept members of those ensembles, the work of which singers was clearly marked by chorus master Rodney Wynkoop. (Readers, are you still with us?)

This wasn't the composer's first appearance in the Triangle. Shorter pieces have been played on several occasions by the Durham Symphony (with more on the horizon), and the NC Symphony gave two performances of the admirable Piano Concerto in One Movement in 2018 – a work the Duke Symphony will play on Oct. 2, in a concert labeled "Cultural Confluence: The Old World Meets the New" – a concert that will feature pianist Karen Walwyn, the artist who brought the concerto out of obscurity after its rediscovery. (We've written about Price and the remarkable rediscovery of a trove of her music here, and we are pleased to append Heid's extensive program note for this concert at the foot of this review.)

Hudson is one of the great voices of our time, and hearing her bring Price's music to life in partnership with Heid made for an exceptional experience. She's surely at the height of her prowess now, and this is a fabulous voice. The music suggests Richard Strauss in richness, beauty of melodic lines, and skill in setting the female voice. And the selections were nicely varied, ranging from celebratory in nature to reflective to quasi-operatic to amusing, with stops along the way for a touching, lullaby-like children's song and a glorious closing pair of spirituals, one of which had featured in Marian Anderson's historic Lincoln Memorial concert in 1939.* (For the record we will list the selections at the end of this review.)

The Ciompi Quartert's contribution was a set of five "folksongs" – "Calvary," "Clementine" (variously credited), "Drink to Me Only" (lyrics by Ben Johnson), "Shortnin' Bread" (which we're unlikely to hear anywhere else anymore…), and "Swing Low." Price's musicianship simply astounds in these varied pieces, unified by her fine, always respectful transcriptions and consistently intriguing use of counterpoint. The ensemble's members – violinists Eric Pritchard and Hsiao-Mei Ku, violist Jonathan Bagg, and cellist Caroline Stinson – worked together like the well-oiled team they are.

The Sonata in E Minor was played (from memory) by one of the newest additions to Duke's stable of artists.  Seyfried is a welcome hire whose performance of the wonderful three-movement work brought it to vivid life. There are spiritual and folk overtones in abundance – the first movement seems more of a parade of grand and memorable tunes than your standard sonata form – but that merely adds to its overall appeal. Price clearly knew her way around a keyboard and she has plenty to say in her own wildly gifted manner. This perhaps more than other pieces played here displayed her large-form skills over considerable spans of time. The slow movement seems a particular gemstone but there is also much to admire in the finale, with its elaborate recapitulations and coda – did she know Mahler's music perhaps? Wow!

If the songs suggested the lush Romanticism (and skill) of Strauss, albeit with a distinctly American accent, the choral music suggested the exquisite purity and simplicity of Schubert. These six pieces (well, three short excerpts from a communion service and five stand-alones) may have been the highlight of the evening, thanks to their consistent beauty and the splendor of the renditions by the 50 or so vocalists. Wynkoop didn't conduct, but we knew he'd been there in force, as the texts emerged with the utmost clarity and the musical lines were all readily apparent throughout. The directors, all members of the ensemble, were Samantha Jackson, Bryn Lawson, Qingyang Xu, Clayton Delp (nos. 4 and 6), and Jia Jia Shen, and the accompanist was Hye-Bin Song (except for the a cappella No. 5). (The titles are listed at the end of this review.)

It would have been helpful to have had the texts of the songs – and the performers thereof closer to the front of the stage. The words of the choral pieces were provided in the admirable and generously annotated program – a keeper, for sure! And I must note the somewhat bizarre blue lighting that illuminated the stage during changeovers from one group to the next – very strange.

*A song that, alas, was omitted at the end of the (truncated) NBC broadcast and that as a result was not preserved on transcriptions of the program….

Notes on the Program by David Heid, producer

Florence Beatrice Smith Price was born in 1887 in Little Rock, Arkansas. She was both an accomplished pianist and a prolific composer. Her father was a dentist in Little Rock, while her mother taught piano and worked as a school teacher and a business woman.

Florence was the valedictorian of her high school when she graduated at the age of 14. She pursued her musical training at the renowned New England Conservatory, one of the few music conservatories that accepted students of color. As a woman and person of color, Price initially followed the only paths available for her in classical music, primarily as an educator. In 1927, she moved to Chicago to escape the racial violence happening around her in Arkansas as well as a bad marriage, and continued her own musical education as well as her compositional work.

In 1932, she won First Prize in the prestigious Wanamaker Foundation Composition Competition. As the first prize winner, her Symphony No 1 in E Minor was performed by the Chicago Symphony, marking the first time an African-American female composer had a symphony performed by a major American orchestra. (Interestingly, her Piano Sonata is also in the key of E minor.) It is difficult to imagine, at a time when both women and people of color were so marginalized in the classical music field, that Price could reach such a level of success. Her symphony was performed on a stage full of only white men.

Never able to break into the mainstream of classical music, largely because of issues surrounding race and gender, Price died in 1953 in relative obscurity. Lately, however, there has been a revival of interest in her compositions and she seems on her way to claiming her rightful place among notable American classical composers.

Why the sudden revival of interest in Florence Price? In 2009, a dilapidated house on the outskirts of St Anne, Illinois, was about to be renovated. In a part of the house that had remained dry, the owners made a curious discovery: piles of musical manuscripts, books, personal papers, and other documents. The name that kept appearing in the materials was that of Florence Price. Looking up the name online, they were surprised to discover that she was somewhat known. This discovery launched renewed interest in her works and gave the world two new violin concertos and a series of new piano pieces.

As a great pianist in her own right, it is no surprise that Price’s vocal works contain impressive and important piano parts. In fact, the piano writing in “Hold Fast to Dreams” is concerto-like in its scope, sweep and virtuosic figurations. Vocally, the songs rely on soaring romantic lines and a heart-felt commitment to text. Her choice of texts are frequently complex subjects, although “Tobacco” reveals a composer with a delightful sense of humor. Perhaps her most frequently performed work is the spiritual arrangement, “My Soul’s Been Anchored in the Lord,” made famous by Marion Anderson as the final selection in her 1939 concert at the Lincoln Memorial.

In her career, Price appears to have written two string quartets. One quartet was titled Negro Folksongs for String Quartet, composed around 1950, and included settings of four familiar spirituals: “Go down, Moses,” “Lil’ David Play on your Harp,” “Somebody’s Knockin’ at Yo’ Door,” and “Joshua fit de Battle of Jericho.” Her quartet String Quartet on Negro Themes was premiered at Carey Temple Church in 1951 but its contents were not indicated in any program. It may well be that these two works are one and the same quartet.

In 1932, Price received Wanamaker Foundation Awards for her Sonata in E Minor for solo piano and her Symphony in E Minor. Works such as her Sonata in E Minor and Symphony in E Minor are steeped in 19th century harmony and orchestration akin to that of Tchaikovsky. The Sonata in E Minor is a clear example of a fusion of classical roots and vernacular idioms. The three movement work represents a collage of influences, with thick chordal textures and dotted rhythms reminiscent of Beethoven in the opening of the first movement, contrasting with several melodic themes carried throughout the piece. While filled with traditional devices, Price makes the piece uniquely her own by her utilization of vernacular forms. The second movement melody obviously seems to be a spiritual tune awaiting lyrics. Throughout the outer movements we see evidence of rag and juba dance passages, creating a uniquely American composition.

Price’s choral works are surprising among choral literature in that an enormous amount of her output is not for SATB choir. She was particularly taken by female voice-only compositions (SSA), including a SSA composition with chamber accompaniment and another with string quartet accompaniment. As in her other work, her writing ranges from a traditional, classical approach to vernacular-influenced composition. The choral works with piano accompaniment also tend to showcase the piano in a very virtuosic way, as evidenced by “Praise the Lord,” which will end this evening’s concert. Currently one of the greatest impediments to additional performances of Florence Price’s choral works continues to be the lack of published choral scores. A number of the selections performed this evening are still only available in handwritten manuscript form.

I need to offer a few quick, special words of thanks. Creating an event of this scope really does take a village. All the performers tonight were so enthusiastic about appearing when I asked them. The start of the school year is exceptionally busy, so I don’t take their artistry or time for granted. When I started forming this event, Philip Rupprecht was the Chair of the Music Department and he was incredibly supportive in a variety of ways. Without him, this event wouldn’t have gotten off the ground. Deans Valerie Ashby and Gennifer Weisenfeld stepped up to make sure I could let people know this was happening. Finally, our concert staff is amazing. This event created a variety of complicated challenges and my colleagues Gretchen Hoag, Rick Nelson and Elizabeth Thompson were so generous with their energy and time.