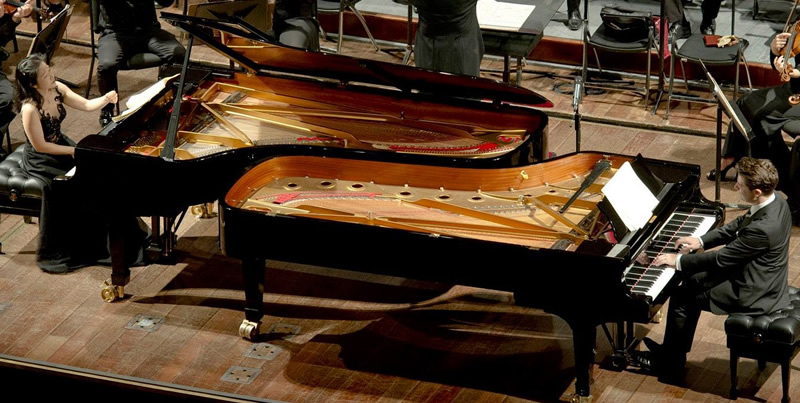 The North Carolina Symphony's 2019-20 season, titled "A Season of Celebration," kicked off with Grant Llewellyn at the helm; Poulenc's Concerto for Two Pianos was the centerpiece of a gorgeous concert. What was perhaps lacking in "flashiness" for a season opener (usually not the most gratifying, anyway) was more than made up for in a lasting sense of meaning and heart. To this end, Llewellyn, beginning his last season as music director of the NC Symphony, brought the program together with personal connection.

After the traditional fervent "Star Spangled Banner" to open the season (Llewellyn led this with a particular relish), the strings evoked imagery of our conductor's home with Grace Williams' Sea Sketches (1944). A spoken introduction made this more poignant – the conductor's hometown is less than a mile from Williams' former home in Wales. Calling back to Ralph Vaughan Williams' graceful nature imagery, these miniature tone poems are quite literal to their titles – "High Wind" is fragmented and capricious, while "Calm Sea in Summer" is placid yet mysterious. This picturesque journey brought to life by the orchestra is quite similar to the sundry characters portrayed later on with Elgar's Enigma Variations.

Between these two more literal works, the title inspiration for the program: husband-and-wife duo Lucille Chung and Alessio Bax have taken a sense of musical collaboration to new heights with their effortless balance. The Poulenc Concerto, in D minor, has more ensemble challenges than virtuosic (although passages of the latter are still plentiful) and, in a miraculous texture, the two pianos are often difficult to aurally separate. Chung kicked off the first Allegro movement, unfazed by sharp interjections from the orchestra. The mood is brisk and locomotive, with an unexpected slow cadenza towards the end that belies the second movement (Larghetto). This movement is a cross between a Classical ostinato and a Romantic era melody soaring above in the strings. The third movement, Allegro molto, involves brass and percussion more than the previous two, leading the drive ahead with rhythmic motifs. A feathery, breathtaking cadenza leads deceivingly to a sudden ending.

Edward Elgar's Variations on an Original Theme, Op. 36, better known as "Enigma," has a movement to delight everyone – cellos shine in the low, languid melodies of movements one and twelve, the seventh is excited and boisterous, and the ninth is achingly passionate. Each brief movement is a vivid snapshot of a specific yet relatable mood. All of this and more culminated in the NC Symphony's performance of the final section, a collage of material from the previous music. Perhaps this collage is a look forward to the exciting season ahead! A look at the future programs reveals beloved classics with new works and collaborators.

This program will be repeated at Meymandi Concert Hall on Saturday, September 21. See our sidebar for details.