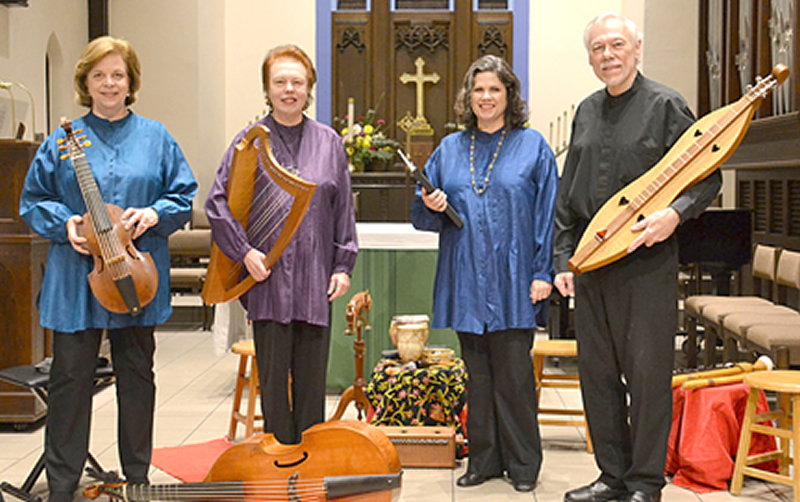 Music selections will come from three different sources. Excerpts from The Cantigas de Santa Maria will begin the program of Songs & Stories. Written during the rule of Alfonso X, King of Castile and Leon (also known as Alfonso el Sabio, Alfonso the Wise), the songs in the Galician language, are in honor of the Virgin Mary. They recall Mary's virtues and recount the miracles accomplished by her intercession. These are associated with the Pilgrimages to Compostela (Spain) and may have been related during the evenings as the pilgrims were on their journeys.

The second set of songs, Cantigas de Amigo (Songs of a friend), are unique telling a story from a female point of view. These seven poems, written by Martin Codax (or Codaste) are songs of the sea from the town of Vigo on the west coast of Spain. Centuries before the sea route to India was discovered, medieval Galician poets sang of the sea in lyrics filled with a wistful melancholy and music. The little church on the coast was often the place of prayers for those who had gone to sea from the town's harbor. The entire set of poems will be performed in a seamless fashion.

The concert concludes with selections from another manuscript but this time from a Benedictine monastery in Bavaria (present day Germany). Known as Carmina Burana, this collection contains poems in Latin and represents the last outpourings of poets who still used the lingua franca of Christendom as fluently as their individual native tongues. The poems by diverse authors are about love and the joys of life.

Performing music of this period is a creative process as no one really knows how it was originally presented. Carolina Pro Musica uses a mixture of strings (harp & viol) and winds (recorders), plus percussion and voices in their presentations. Creating moods for the listener plays a crucial part of storytelling even today.

Although the Cantigas de Santa Maria has been known for many years, the Cantigas de Amigo with musical notation was discovered in a book binding at the beginning of the 20th century. The Carmina Burana was known from 1803 at the dissolution of the monastery, but not well-known until the 1930's when Germany composer Carl Orff composed a work using some of the texts.

Come be intrigued with stories from the past, still relevant today.