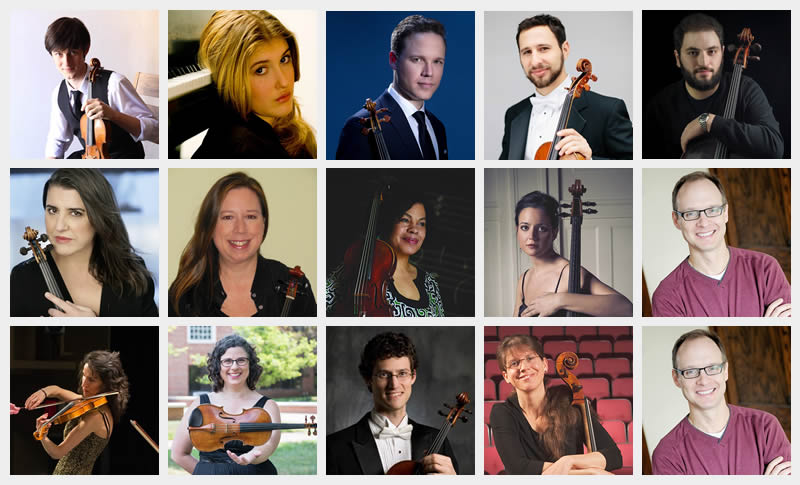 Members of the Eastern Music Festival faculty gathered together in the Tew Recital Hall at UNC-Greensboro Monday evening for a program of chamber music featuring three well-known composers. The concert began with a spirited reading of the Piano Trio in D, Op. 70, No. 1 (1808), also known as the "Ghost," by Ludwig van Beethoven (Germany, 1770-1827). Supposedly, the work got its nickname "because of its strangely scored and undeniably eerie-sounding slow movement." The three musicians were Jeffrey Multer, violin, Julian Schwarz, cello, and Marika Bournaki, piano.

Known as "one of the most passionate of all Beethoven's chamber music compositions," the work was written just as the composer had come to terms with his growing deafness and begun composing in his "heroic" style. Indeed, the opening unison line bubbled with optimistic vitality. Sudden dynamic shifts and changes in character added to the "passion" mentioned above. All three musicians got a workout in this movement. The slow, 12-minute second movement (which utilizes music from sketches Beethoven had previously worked on for the witch's scene in Shakespeare's Macbeth) begins with short, mysterious unison lines played by violin and cello with piano responses. Unexpected interruptions add to the cryptic character. Strange tremolos and trills from the piano and lots of diminished-seventh chords make for the extraordinary music. Each musician gave special attention to the shifting textures and dynamics, making for a wonderful read. The finale returns the cheeriness from the opening movement with great musical conversations between and among Multer, Schwarz, and Bournaki. All three seemed to enjoy the unexpected turns of harmonies and the sudden stops and starts, which provided for a thrilling conclusion.

Igor Stravinsky (Russia, 1882-1971) became an international star with the successful presentation of three ballets performed in Paris 1910-13. Petrushka was the second one. The performance on this occasio was an arrangement for piano four hands played by Marina Lomazov, a Tannenbaum-Sternberger Distinguished Teaching Artist, and Joseph Rackers, one of EMF's collaborative artists.

As Lomazov explained, those in the audience who had come to see the ballet would be disappointed since this was a piano arrangement, but the performance would be shorter, as the duo was going play only three movements (instead of the four listed in the program). The three movements were those that were written for piano solo for Arthur Rubinstein. (Interesting side note: the four-hand arrangement made by Stravinsky to rehearse the ballet was originally played by the composer with Debussy.) This is colorful music, and while the piano version cannot match the multi-hued nature of the orchestral score, the energy, commitment, and physicality displayed by the duo was terrific. Murmuring textures and glissandos were very much present. Sometimes the dynamism of the duo resulted in banging sounds, but lots of dynamic shifts and distinctive music gestures and sounds helped delineate the characters of the ballet.

Antonín Dvorák (Bohemia, 1841-1904) is justly famous for his use of Slavic folk elements in his music, and his Sextet in A, Op. 48 (1878), makes obvious references in two of the movements. A Dumka (the second movement) is a "folk ballad or lament, typically melancholy with contrasting lively sections," while a Furiant (the third movement) is "a spirited Bohemian dance tune in 3/4 time with shifting accents." This work has a rich, dark texture with really only two treble instruments, the violins, played by John Fadial and Jenny Grégoire. The other four are more middle and lower range, played by violists Ben Geller and Daniel Reinker and cellists Beth Vanderborgh and Amy Frost-Baumgarten.

Perhaps this thick texture explains why it was initially hard to sort out from where the main tunes were coming. There certainly was nothing tentative about the playing of the musicians, who gave a strong and robust sound. It seemed that Fadial got first shot at the lion's share of the main melodies, with Vanderborgh delivering most of the tunes from the lower register. The Dumka began with a gentle swaying tune. The middle section was more soulful, lovingly played by all. The Furiant was furiously paced, played with good spirits. Violist Reinker got the opening poignant tune in the finale, a theme and variations affair. The varied melody was passed to the violin and then to the cello before the movement vaulted into the excited coda, which ends the work in a blaze of glory. All six musicians gave an emotional, impassioned reading of this work that helped secure Dvorák's international reputation among the best musicians of the day.

The Eastern Music Festival continues throughout July. See our calendar for upcoming performances.