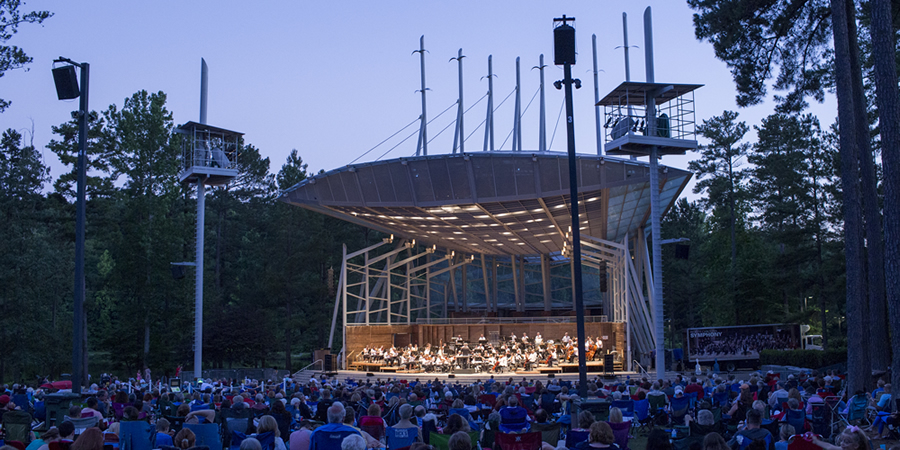 Each summer, friends and family gather with blankets and lawn chairs, picnics and drinks, and settle in next to the pines and Symphony Lake at Koka Booth Amphitheatre for North Carolina Symphony Summerfest concerts – presented by UNC REX Healthcare – featuring a wide range of music, from classical masterworks, to Broadway show tunes, to pop and rock. NCS musicians eagerly anticipate Summerfest each year, when they have the opportunity to share unique concert experiences with the community in a relaxed, picturesque outdoor setting at the Symphony's summer home in Cary.

This year's Summerfest series opens May 25 – Memorial Day weekend – featuring Symphonie fantastique, a bewitching and semi-autobiographical work by Berlioz that tells the tale of an artist who becomes unraveled by unrequited love. Charming favorites by fellow French composers include the Bacchanale from Samson and Delilah by Saint-Saëns and the Suite No. 1 from Carmen by Bizet. Audiences will have the opportunity to witness the exceptional talent of the Symphony's 2018 Youth Concerto Competition winner Morgan Short when the young harpist, who is pursuing a music degree at the University of North Carolina School of the Arts, is soloist in Handel's Harp Concerto. In addition, as part of the Town of Cary's annual "Play with the Pros," citizen musicians will join the Symphony's professional musicians on stage for the Carmen suite.

A Space Spectacular on June 1 celebrates the 50th anniversary of the Apollo moon landing as part of the statewide collaborative initiative Lift Off NC: Apollo and Beyond. The Symphony's program explores how composers across generations and genres have captured the mysteries of space, with memorable film music from Star Wars and E.T., classical selections from Holst's The Planets, and more. This is the perfect program to bring the whole family together under a star-filled sky. Star Wars characters from the 501st Legion, the official all-volunteer costuming organization, will be at the concert ready to take photos with fans, and Morehead Planetarium will be on site with astronomy activities.

June 7 and 8 will be a weekend dedicated to two composers' approaches to evoking the four seasons in music, with two concertos performed by violinist Jennifer Frautschi. The Grammy-nominated soloist will first perform Piazzolla's tango-infused Four Seasons of Buenos Aires on Friday evening. The program also features music by Argentinian composer Osvaldo Golijov, works by Mexican composers Márquez and Moncayo, and Latin American-inspired works by Copland. On Saturday, Frautschi performs Vivaldi's Four Seasons – one of the most popular violin concertos of all time, vividly depicting the unique characteristics of spring, summer, fall, and winter. The delightful Overture to A Midsummer Night's Dream by Mendelssohn and the graceful Suite No. 1 from Water Music by Handel open the program.

The following weekend offers more classical music favorites that are immediately recognizable, with selections by Beethoven and Mozart, as well as Rossini's William Tell Overture and more on June 15.

One of the most anticipated Summerfest programs of the season is an evening with singer, songwriter, and pianist Ben Folds on June 22. The North Carolina native has been described by Paste magazine as meshing the "classical and pop music worlds in ways that few mainstream contemporary artists can hope to achieve." A classically trained pianist and percussionist, he rose to fame in the 1990s with his band Ben Folds Five and is widely regarded as one of the major music influencers of his generation. His appearance with the North Carolina Symphony will offer fans the experience of hearing his countless hit songs in a way that highlights the full extent of his musical training and artistry.

On June 29, musical theatre stars Julie Reiber and Rodney Ingram join the Symphony for show-stopping tunes from Broadway's biggest hits – including songs from Wicked, The Phantom of the Opera, Chicago, Cats, The Lion King, Les Misérables, Mamma Mia!, and Beauty and the Beast.

NCS spotlights vivacious orchestral showpieces by some of Russia's greatest composers on July 6 – from heart-racing overtures by Shostakovich, Rimsky-Korsakov, and Glinka, to familiar romantic tunes by Khachaturian, to the theatrics and pure fun of Tchaikovsky's 1812 Overture.

Chicago tribute band Brass Transit takes the stage with the Symphony on July 12. Embodying Chicago's iconic sound, with rock 'n' roll melodies and unforgettable horns, the band will perform classic hits including "Saturday in the Park," "25 or 6 to 4," "If You Leave Me Now," and "You're the Inspiration."

The Summerfest season concludes on July 20 with NCS presenting local legends The Embers, who will have audiences singing and dancing along to Carolina beach music until the stars come out. (The Symphony will not perform at this concert.)

In addition to the 10 ticketed concerts in the Summerfest season, NCS performs a free concert, complete with fireworks, on July 4 as part of the Town of Cary Independence Day celebration.

Summerfest evenings are lively, laid back, and fun, with most concerts including pre-performance activities such as the Instrument Zoo, sponsored by MetLife, where kids can try out the instruments of the orchestra, and the Picnic of the Week contest, sponsored by Lowes Food.

Tickets package options include Lawn Flex Passes that can be used for lawn admission to any of the Symphony's Summerfest concerts; and Covered Crescent Packages, which include a ticket to each of the 10 concerts in the Summerfest series, seated at a table in the Covered Crescent section. Single-concert tickets are also available in advance or at the gate. Children under age 12 are admitted free on the lawn.

For more information and to purchase tickets, visit ncsymphony.org, call 919.733.2750, or visit the NCS State Headquarters Offices at 3700 Glenwood Avenue in Raleigh.

Founded in 1932, the North Carolina Symphony (NCS) is a vital and honored component of North Carolina's cultural life. Each year, the North Carolina Symphony travels more than 18,500 miles throughout the state, presenting 300 concerts, education programs, and community engagement events that are enjoyed by 250,0000 adults and schoolchildren in more than 90 North Carolina counties – in communities large and small, and in concert halls, auditoriums, gymnasiums, restaurants, clubs, and outdoor settings. The Symphony's full-time professional musicians perform under the artistic leadership of Music Director Grant Llewellyn.