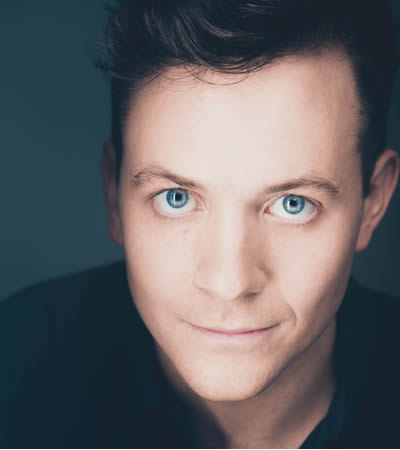 Music for a Great Space was founded in 1990 by Lucy and Henry Ingram to take advantage for the musical possibilities of the sanctuary of Christ United Methodist Church. Lucy is now music director of the series, and this recital was paired with the fund-raising gala for the Henry Ingram Memorial Concert. This was the first year its endowment wholly funded the concert.

With the seemingly incongruous exception of the surprise opener and Frédéric Chopin, both all remaining composers as well as the performer fitted the theme of North Carolina connections. Pianist Richard Valitutto grew up between 6-18 in Greensboro. At the then "Music Academy" he studied with Thomas Swenson and, later, while at Bishop McGuiness High School, with George Kiorpes and Alan Hirsh. Valitutto got his Bachelor of Music summa cum laude at the University of Cincinnati's College-Conservatory of Music and his MFA in piano performance at California Institute of the Arts; he is currently Sage Fellow in Cornell University's Keyboard Studies DMA program. All the while he has racked up a reputation for contemporary keyboard performance (piano, organ, and harpsichord) and as a vocal accompanist, chamber musician, and composing/improvising artist.

At the surprising sound of our National Anthem, the audience of course rose. I wonder how many quickly noted unexpected details in the rendition as it built to its brilliant finish? Valitutto pulled out all the stops for Rachmaninoff's stirring arrangement.

Next came five selections (I, III, V, VII, and XIV) from Time Curve Preludes (1977-78) by William Duckworth (1943-2012). The native of Morganton, NC, was designated by critics a pioneer of post-minimalism, "abandoning austere, process-driven works" in favor of drawing upon a wide range of sources such as Appalachian music, North Indian classical rhythms and forms, Bach, Indonesian gamelan music, or even direct quotes from other composers. For these preludes, Duckworth instructs the performer to add lead weights to keep certain low keys depressed in order to allow the sympathetic vibration of drone pitches to create a sort of "piano d'amore" effect. Valitutto reset the weights on different keys before each prelude. Each often exploited a faster repeated figure in one hand against a slower, punctuating pulse in the other. Shifting dynamics and colors made for an interesting and pleasing group.

Next came a real rarity which may have had its first North Carolina performance since it was composed in 1948: Orestes, by John Cage (1912-92). This is the least well known of three solo piano works Cage composed to accompany choreography by his collaborators during a residency at Black Mountain College. While "In the Landscape" and "Dream" are fairly well known, Orestes, for Merce Cunningham, remains unpublished. Valitutto found the nearly indecipherable, palimpsest-laden manuscript facsimile in the New York Public Library's Performing Arts Division at Lincoln Center and made his own transcription. The work is short but both interesting and pleasing to hear. Valitutto fully exploited its angular aspects, dynamic extremes, and sometimes spare scoring.

The first half of the concert ended with Piano Sonata (1933-34/rev 1936, 1947-48) by Hunter Johnson (1906-98). He was born near Benson, attended UNC, and graduated from the Eastman School of Music in 1929. His music has been described as a combination of neo-classicism, neo-romanticism, and nationalism. He is best known for the Piano Sonata and for his music for Martha Graham: Letter to the World and Deaths and Entrances. He was named Composer Laureate of North Carolina in June, 1991.The Sonata is in three movements: Allegro molto e dinamico, Andante cantabile, and Allegro giusto, played without pause. The singing line of the middle movement made a fine contrast to the dramatic and mercurial shifts of the outer ones.

After intermission the program resumed, somewhat incongruously, with Four Mazurkas, Op. 17 (1832-33), by Chopin. No. 1 in B-flat: Vivo e risoluto, No. 2 in E minor: Lento, ma non troppo, No. 3 in A-flat: Legato assai, and No. 4 in A minor: Lento, ma non troppo. Valitutto played these with verve and great attention to articulation, color, dynamics, and above all, rhythm.

It was the next work on the program, Gustave le Gray (2012), by Greenville, NC, native Caroline Shaw (b.1982), that was the reason for Chopin being programmed. According to the program note Shaw "takes a fragment from Op. 17, No. 4, as a jumping-off point to create a post-minimalistic work that wander[s] through various tableaux evoking 19th century Romanticism, Appalachian folk music, liturgical hymns, and half-forgotten melodies." Valitutto's intense and skilled spinning off of shifting repetitions was fascinating as it was left to the listener to surmise what element was undergoing metamorphosis. Did we hear traces of jazz or blues?

The official program ended with transcriptions of two songs by Rocky Mount native Thelonious Monk (1917-82), whom Valitutto said was North Carolina's greatest composer. Chris Donnelly's skilled transcriptions were of "Pannonica" (1956) and "Ruby, My Dear" (1945) from Alone in San Francisco (1959). Valitutto's loving performances gave full value to the tunes and their harmonic richness. One could imagine listening in a timeless (smokeless) club.

The Monk pieces were rewarded with richly earned standing ovations and in turn earned a venturesome encore: Poem in F-sharp, Op. 32, No. 1, by Alexander Scriabin (1872-1915). This, along with his unhackneyed program, revealed Valitutto to be an extraordinary musician.