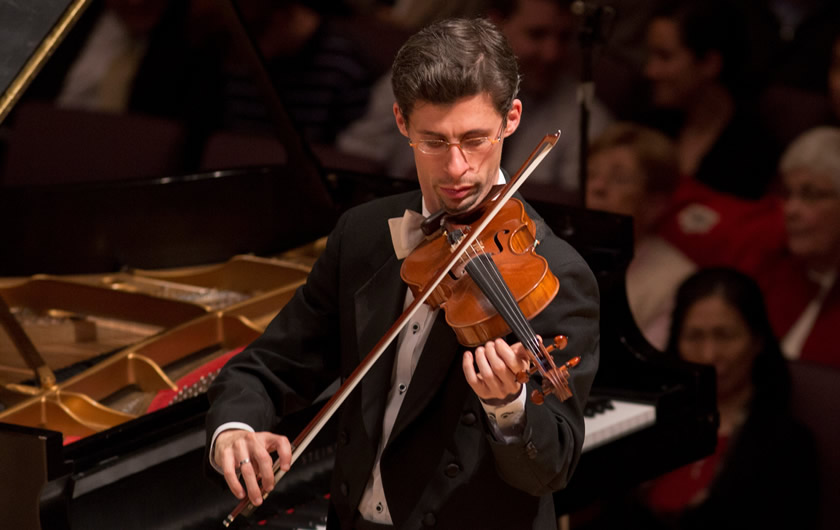 "If music be the food of love, play on...." Those famous words put into Duke Orsino's mouth by Shakespeare in Twelfth Night were brought to mind by the varied program of orchestral dances superbly realized by the NC Symphony. The orchestra's playing has, to this reviewer's ears, reached a new level of artistry this season, the final season before conductor Grant Llewellyn ends his tenure as music director and moves to conductor laureate status.

Other highlights of this offering, to be repeated on Saturday, February 9th at Meymandi Concert Hall, included Llewellyn's imaginative program of music old and new, all relating to waltzes and other dance forms; his introductory commentaries preceding each work; and the musicianship and virtuosity of soloist Dovid Friedlander, associate concertmaster of the orchestra.

Always informative, Llewellyn's comments were also often humorous, whether urging the audience not to suffer from "premature applause" in the opening "Invitation to the Dance" by Carl Maria von Weber or when wryly wishing all a "Happy Valentine's Day" after describing Maurice Ravel's La Valse as including "dark undercurrents," the "destruction of the Viennese Waltz," and as having a "depressing finale."

Weber's "Invitation..." was originally composed for solo piano; its orchestration was done by Hector Berlioz for a ballet required by 19th century French opera tradition to be added to Weber's opera Der Freischütz for Paris performances. In typical Berlioz style, extra wind and brass instruments were called for, e.g., four bassoons and four trumpets instead of the usual two, and two harps. The programmatic work begins and ends with a 'cello solo, beautifully played by principal Bonnie Thron.

The quintessential waltz of all time followed: "On the Beautiful Blue Danube," by "the Waltz King," Johann Strauss, Jr. Filled with rubato, this music makes one agree with Llewellyn's reminiscences of his first paying "gig" as a conductor of Strauss waltzes, when he wondered how the waltzers of Vienna could possibly have kept up with all the changing tempos! This familiar music was followed by the rarely-performed Dances of Galánta, by Hungarian composer-teacher-ethnomusicologist Zoltán Kodály. The five movements, played without pause, were inspired by Roma tunes written down from performances in the town of Galánta. Beginning with a passionate slow movement featuring soulful clarinet solos by principal Samuel Almaguer and continuing with sparkling woodwind dialogues in the third movement, Llewellyn spurred his forces to a Shostakovichian intensity; rivulets of sound flowed into a sonic stream which became an ocean of rhythmic excitement.

After intermission, we heard music by one of the great Russian Romantic composers, Peter Tchaikovsky. Not listed on the program was the opening work, the Finale to Act I of the ballet Swan Lake. This familiar music was followed by the Russian Dance and Finale from that same ballet. Friedlander, the multi-talented violinist who is also an inspiring teacher and a tri-athlete, took on Tchaikovsky's pyrotechnic solo cadenza and, in the vernacular, "nailed it!" (The artist can be heard discussing his performance here.) The audience asked for, and received, a special additional encore, this time a tango, as Friedlander and the orchestra played "Por una Cabeza," an Argentinian tango by Carlos Gardel featured in the Al Pacino motion picture Scent of a Woman. The arrangement, replete with melodic double-stops, was made for über-violinist Itzhak Perlman by John Williams. The orchestra joined the audience in well-deserved vigorous applause for their colleague.

British composer Thomas Adès composed in 1995 a chamber opera called Powder Her Face, for four singers and 15 instrumentalists, based somewhat on the sexual adventures (and resulting divorce trial) of a real Duchess. Invited to expand sections of the opera for a large orchestra, Adès chose three movements: the Overture, Waltz, and Finale. Using five musicians to play an array of 20 percussion instruments and writing for an expanded number of woodwinds, Adès' new version, first performed in 2007, is a study in colors (many produced by glissandi from unlikely sources), rather like Ravel, Gershwin, and Bernstein on steroids. This is a demanding score in its rhythmic complexity and, like the Kodály, likely new to most members of the orchestra. Their collective talents merged in an exciting new sound-collage which, while hardly "romantic" in its construction, is perhaps a contemporary commentary on romantic misadventure.

The concert closed with Maurice Ravel's 1919-20 "La Valse" (subtitled poème chorégraphique, although rejected by the Russian Ballet's Sergei Diaghilev and not staged as Ravel intended it until years after his death). The NC Symphony, having engaged the extra players required by the large orchestration, waltzed its collective way through Ravel's cascades of musical chiaroscuro in a performance which could have been improved only by the addition of still more string players to balance the volume of the enlarged woodwind, brass, and percussion sections.

In summary: an imaginative program which went far beyond its billing as a Valentine's Day offering, with all concerned to be congratulated for another excellent performance. Bravos to the NC Symphony, soloist Friedlander, and conductor Llewellyn.