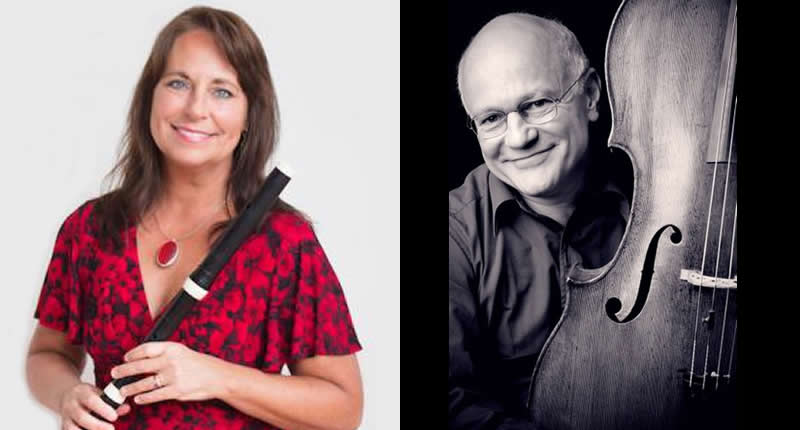 The flexible and innovative Mallarmé Chamber Players' performances are often collaborative and interdisciplinary, spanning a broad repertoire ranging from the traditional through such diverse music as African American, Asian, and Latino. For this concert, titled "Leipzig Locals," the Mallarmé musicians were wearing their HIP (Historically Informed Practice) "hats," or rather... instruments. The Baroque German composers' music was played on apt period instruments by traverse flute player Kathie Stewart, violinist Nicholas DiEugenio, pioneer viola da gamba and cello player Jaap ter Linden, and harpsichordist Elaine Funaro. The performance took place in the sanctuary of the First Presbyterian Church, Durham. (Biographical information on these players may be found here.)

The four German composers are connected not only by their time in Leipzig but also by how their lives and careers connected to Johann Sebastian Bach (1685-1750) and his family. The position of Kapellmeister and Kantorof Leipzig's St. Thomas Church is a nexus with three. Georg Philipp Telemann, their first choice, declined appointment, as did their second choice, Christoph Graupner (1683-1770). Bach was their third choice. Johann Gottfried Müthel (1728-88) was Bach's last pupil at the St. Thomas School, while Carl Frederick Abel (1723-87) had been a boarder there.

The concert opened with a work by Graupner, a prolific composer of over 2,000 works including 1,418 sacred cantatas, 24 secular cantatas, 113 symphonies, and more. Some have compared his music favorably to that of his friends Handel and Telemann. Graupner's Trio Sonata in B minor, GWV 219, has three movements: Allegro, Largo, and Allegro. It was played by Stewart, DiEugenio, Linden, and Funario.

Stewart's fine breath control produced a beautiful tone from her single-keyed traverse flute. Color and dynamics were subtle, and fast passages were very clear. DiEugenio's violin matched her closely, often rising from continuo to repeat the flute's melody. Continuo support of cellist Linden and harpsichordist Funaro was excellent. Graupner's use of Baroque "affect" and mercurial melodic shifts were brought off superbly.

This was followed by Sonata in D for flute and continuo by Müthel. It is in three movements: Adagio, Allegro ma non troppo, and Cantabile. This gave plenty of scope for Stewart's virtuosity and musicianship. Her weaving of long, seamless melodic lines was breathtaking. Application of ornamentation was tasteful. Linden had a nice yearning cello line in the Adagio and a fine ostinato episode in the fast movement. The finale was full of flute flourishes, thrills, and melodies.

The first half of the concert ended with a real rarity. Instead of one of the six sonatas for violin and harpsichord, composed in J.S. Bach's Köthen period, the Sonata in E minor, S.1023, for violin and continuo, from his late Weimar period was given. It is in three movements: (Prelude)-Adagio ma non troppo, Allemanda, and Gigue.

DiEugenio gave a stirring performance of the prelude and brought intensity to the melody to the Adagio. Besides matching Funaro's close keyboard support, Linden's cello sustained a long droning after the prelude. Spare continuo support in the Allemanda helped highlight DiEugenio's flamboyant fiddling. The lively Gigue was fairly standard rhythmically.

Post-intermission opened with a fascinating selection and performance of Sonata in D minor for solo viola da gamba by Carl Friedrich Abel. In addition to his St. Thomas School connection, Abel was close friends with Johann Christian Bach and held a joint concert series with him in London. He was a virtuoso on the viola da gamba and was one of the last compose for it.

Ter Linden is a pioneer of the post-war HIP movement. This musically-interesting, three-movement piece gave him plenty of scope to show off insight and technique. He brought a warm tone and clear articulation to the opening Allegro. His lower bass notes were lovely. He spun a long, mournful lamentation in the Adagio before finishing with clear, fast paced bowing in the finale's Allegro.

All four players joined to end the concert with a rousing performance of the First "Paris" Quartet in A, TWV 43: A1, for flute, viola da gamba, violin, and harpsichord by Telemann. The best known composer of this period, prolific Telemann was renowned for his skillful use of national music, French, Italian, German, and even Polish elements in his works. It is in four movements: Soare, Allegro, Andante, and Vivace.

Each player rose to the challenges of Telemann's solos and pairings with enthusiasm. Elegance and high spirits were given equal scope. Besides flamboyant passages for Stewart and DiEugenio, Linden's gamba was often freed from Funaro's continuo line. The artists were rewarded with a sustained standing ovation by the large audience of music lovers.

This concert was held in connection with Raleigh Area Flute Association, and featured two masterclass – one by Stewart and the other by Linden.