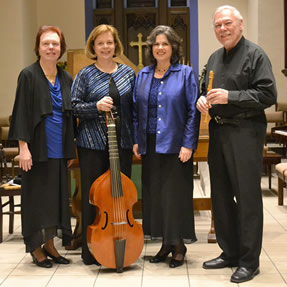 On a clear and mild evening, much appreciated after the cold snap of late, Carolina Pro Musica gave us three pieces, each quite different from the other, in a sample of divergence in music written at about the same time. This ensemble specializes in Baroque music performed on authentic instruments. Word to the prospective concertgoer – these are much lower in volume than the modern versions, and even in modestly-sized halls, it's best to sit near the front. Carolina Pro Musica is now in its forty-first year, and the level of expertise is always high in their concerts. In a city not particularly noted for culture of this kind, their presence is highly appreciated.

St. Martin's Episcopal Church is a charming venue, although the pews are hard. (I have learned to bring my cushion.) The acoustics, at least from the front where I am always found, are quite good. Director Karen Hite Jacob introduced the evening's concert with a little talk, but unfortunately her voice is quite soft (matching the dulcet and sometimes hard-to-hear tones of her harpsichord). Do please speak up next time! (Bios of the director and most of the CPM artists are here.)

The first work was the well-known Suite in A minor for recorder by Georg Philippe Telemann. This is by far his most-performed work, first published and brought into popularity in 1936. It's a sad reality that much if not most of Telemann's work was not catalogued or published, and was left in manuscript form, stored in Dresden, where it was all burnt to a crisp in February 1945. But this gem is still with us, and is quite popular.

The solo recorder was played by Edward Ferrell, the CPM expert in recorders and transverse flutes. He was joined by John Pruett and Tom LaJoie, Baroque violins, Kirsten Allen, Baroque viola, Holly Wright Maurer, bass viol, Henry Trexler, bass, and Jacob playing the harpsichord. Ferrell diverged from many performances you will hear of this piece, amd not just by doing it with a recorder and not a modern flute. Many soloists will take advantage of the many fast passages and will crank up the tempo to show off. Not this time, although there was nothing lacking in the allegros.

One thing I noticed, which I had not figured on from previous hearings, was the length of the piece. Evidently, the renditions I'd heard didn't take many of the repeats, of which there are quite a few. The result was a performance lasting over forty minutes. I can see why this is not done very often. With seven movements, most of which having contrasting sections, there's plenty of variety in the music, and they did keep interest going; but in these days of recordings, it is not really necessary to take all the repeats all the time.

The next work was Concerto for Strings in C, RV.117, by Antonio Vivaldi. This three-movement bon-bon was as brief as the first piece was long; it was over before I could check my watch. While quite well performed, this is rather obscure Vivaldi, and not his best effort. Not quite taka-taka-A string taka-taka-E string like in a Suzuki concert, but a forgettable composition nonetheless.

The last piece was Cantata 209: Non sa che sia dolore, by J. S. Bach, first performed in Leipzig in 1729. I know I've heard this before, since I had a little project some years ago to listen to all the Bach cantatas. (Why did my doctor put "OCD" in my records?) But I can't claim to have recognized it. The whole ensemble from the Telemann was joined by soprano Rebecca Miller Saunders. This is a curious work; the libretto, in somewhat approximate Italian, is on the theme of saying goodbye to a sailor taking his leave to head off for a voyage. Saunders had a clear, strong voice, with fine phrasing and pitch control, and clearly with much experience with Baroque music. The cantata opened with an instrumental sinfonia, followed by recitative, aria, recitative, and aria.

This was a delightful evening. I highly recommend attending Carolina Pro Musica concerts and supporting this small group, bringing such high-quality performances to the Charlotte area.