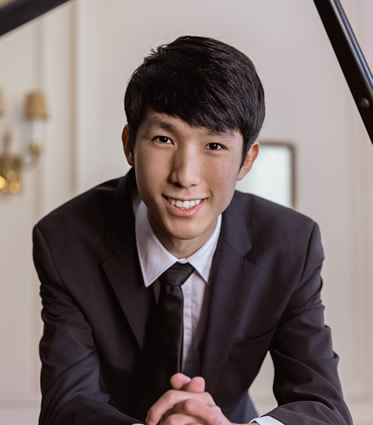 'Tis the season – for prize-winning young artists to give recitals. And few presenters sponsor more promising up-and-coming players more consistently than Raleigh's Paderewski Festival. And few artists – of any age – hold more promise and potential than Eric Lu, whose present mastery was on full display during a program of music by Mozart, Schubert, and Chopin, given in historic Smedes Parlor at St. Mary's School on the last weekend of this year's festival. Lu was among the youngest-ever artists to place in the Chopin Competition in Warsaw, Poland, where he came in fourth. He was 17 at the time.* He's been working since then, at Curtis – chances are he works all the time – and he came to Raleigh fresh from capturing the top laurels at this year's Leeds Competition, which kind of makes him the top dog at the moment, the crème de la crème. And then, from Leeds to Raleigh…. Did we say he's 20 now?

Following informative introductory remarks by Mark Fountain, the festival's president, and Adam Wibrowski, its artistic director (who, among other things, pointed out that the Chopin Ballade we were to hear was composed the same year the room in which we were listening was built), Lu came to the Steinway to begin his program.

Schubert's Impromptus, D.899, may not seem quite the best fit for a Paderewski commemoration concert, but one of the four figured in the Polish giant's last Raleigh recital, given in the spring of 1939 – a photo of the program for which was included in this year's lavish festival booklet – and which lineup drove the selections offered by Lu and by the artist performing the last local recital, Jakub Kuszlik.

The playing was magical, dramatic, technically assured (of course) and artistically informed. It's a relatively rare treat to hear these wonderful pieces in a group, together, and the context of the four on this occasion proved rewarding on multiple levels, not least of which was the general astonishment generated by Lu's playing, highlighted by wide dynamic ranges, great projection of the music's more contemplative passages, and of course his mastery of articulation, which resulted in degrees of clarity not routinely heard from more frequent visitors here – may he come back soon! The best known of the four – the Impromptus in G-flat and A-flat – emerged refreshed, as if we were hearing them for the first time after a thorough cleaning. The crowd expressed its enthusiastic appreciation with lengthy applause.

Chopin's Ballade No. 4 was next – it, too, was played here in 1939 by Paderewski himself. This was elegant in every respect; Lu played the introduction with great restrain, giving the build-up new power and meaning. Indeed, he managed to bring a new sense of connectivity and meaning to the somewhat sprawling work, holding the attention of the audience throughout. And what a dazzling finale!

The post-intermission Mozart Rondo in A minor, K. 511, permitted yet another view of this artist's prowess, for this was classical playing in the most refined sense, full of clarity and definition with the long melodic lines flawlessly projected. One might quibble that this should have preceded the Schubert and indeed it came early in Paderewski's own recital here but one heard no complaints from the spell-bound audience.

The grand finale was the grand "Funeral March" Sonata No. 2, in B-flat minor, Op. 35 – not played here in 1939 but always welcome, and singularly appropriate fare, too, on this eve of the 100th anniversary of the end of WWI. There was so much to admire here that one is hard-pressed to know where to begin: the introduction took off briskly, but there was great expansiveness as the first movement unfolded. Did Lu find the instrument limiting? He seemed from time to time to be pressing its upper limits, in terms of its responsiveness – yes, this was a thoroughly modern interpretation, bigger than some scholars have told us Chopin himself most likely played his own music.

The start of the second movement was dramatic, and throughout Lu filled the room with radiant sound. That famous funeral march was profound in every respect, taking around ten minutes to traverse as its sorrow and profundity were deeply plumbed. Time seemed to stand still as serenity was in effect suspended in air. The quirky finale came and went, brilliantly realized and key to returning listeners to the land of the living – but in this instance, on this memorial weekend – one wondered if switching the order (yes, I know this is blasphemy) and ending with the march might not have been still more effective.

The standing ovation elicited a single encore, Brahms' Intermezzo in A, Op. 118, No. 2, one of the most magical of his smaller pieces, and one that further helped bring us all back to the here-and-now. He'd been serious, even stern of mien throughout, but surely he must have enjoyed the response he garnered.

Hear Lu when you can, if you weren't there.

The Paderewski Festival concludes on Armistice Day with a 3 p.m. program by Jakub Kuszlik, yet another keyboard prize-winner. For details, click here.

*The first place winner of that 2015 competition, Seong-Jin Cho, is making the rounds, too – and he will surely perform here in North Carolina at some not-too-distant point. Here's a review of his Toronto recital last month by our friend Arthur Kaptainis.