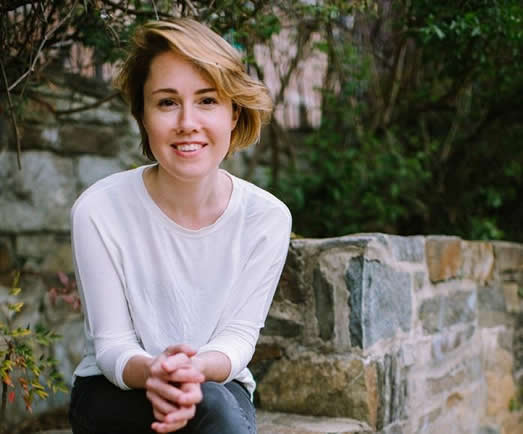 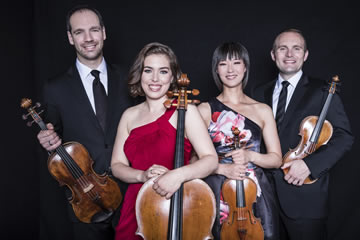 Chamber Music Raleigh kicked off their 2018-19 season on October 14 with a performance given by the renowned Jasper String Quartet and the award-winning composer, vocalist, and instrumentalist Caroline Shaw. The concert took place in the auditorium of the North Carolina Museum of Art, a small and intimate setting. The heavy traffic caused by the State Fair and the opening of the new Georgia O’Keeffe exhibit at the museum, although inconveniences, did not stop people from arriving on time. The auditorium quickly filled with those excited to witness what turned out to be an impressive and memorable performance.

The first piece on the program was the String Quartet Op. 64, No. 6 (H.III:64), in E-Flat, by Franz Joseph Haydn. As intended by Haydn, known as the father of the string quartet, each of the musicians in the Jasper String Quartet individually shone during their performance of this piece. The chemistry of the group was obvious from their frequent and intentional eye contact as well as their seamless transitions among moods and tempos. The result of their conscientious playing was a breathtaking blend of sounds free of any distraction. The Jasper String Quartet’s brilliant execution of the unison in the fourth movement left the audience with eyes wide open in amazement. Judging from the thunderous applause following the final note, the audience could not have been more satisfied with the performance of the piece.

Following the Haydn quartet, the ensemble moved to the contemporary music of Caroline Shaw, the vocalist, instrumentalist, and composer from Greenville who won the Pulitzer Prize for her innovative piece Partita for Eight Voices, making her the youngest winner, ever, of the music prize. With her compositions, Shaw questions the definition of music and studies its incredible power. She takes apart familiar melodies, creates new sounds, and breaks musical patterns with which people have become comfortable. In doing so, she allows listeners to rediscover the magic of music and what it means to them on personal levels. Music is not just a series of notes that form a tune. Music has the power to create emotions and tell stories. It cannot be defined, nor can it be contained by a strict set of rules. Caroline Shaw demonstrates all these attributes with her compositions. One cannot replicate the experience of hearing Shaw’s pieces performed live – it is an eye-opening, emotional, and thought-provoking experience.

The first piece on the program by Caroline Shaw was titled "Valencia," after the standard variety of oranges. This piece was anything but standard, however. According to Shaw's program notes, she wrote the piece to be "an untethered embrace of the architecture of the common Valencia orange, through billowing harmonies and somewhat vicious chords and melodies." Shaw incorporated a wide variety of uncommon techniques into the piece, all masterfully played by the Jasper String Quartet, including left-hand pizzicato, a frequently occurring harmonic-based accompaniment, slow and pronounced glissandos, a sort of reverse sforzando with the accent and weight at the frog instead of the tip of the bow, and a variety of other innovative techniques. The work is a puzzle, made up of a hundred unique pieces that were all perfectly fit together by the Jasper Quartet. Through their body language and playing, it was evident that the four musicians were closely connected to each other and to the piece itself, exchanging small smiles and playful eye contact during the lighter parts of the piece and lowering eyebrows and leaning forward during the more aggressive parts. At the conclusion of this piece, following the thunderous applause and standing ovation, murmurings of "wow" and laughter caused by pure amazement filled the auditorium. It was a truly remarkable performance of a genius composition.

After humbly acknowledging this praise, Caroline Shaw performed three pieces from her collection titled By & By with the Jasper String Quartet. The works in the collection are based on familiar gospel songs and Appalachian songs. The lyrics remain unchanged, but the melodies have been reconstructed by Shaw so that they are essentially unrecognizable. In addition, Shaw replaces the upbeat, gospel sound of these pieces with darker, more thoughtful tones, adding entirely new contexts to the lyrics.

The first piece, "Will There Be Any Stars in My Crown," begins with the quartet plucking gently in a seemingly disorganized fashion. This random but gentle pizzicato continues throughout the piece. The first line of the song is, "I am thinking today of that beautiful land I shall reach when the sun goeth down." Shaw’s lilting and beautifully simple voice transported the audience with these very first words from the auditorium of the North Carolina Museum of Art to a grassy hill in some Celtic land. Shaw did not sing as if she were a performer but rather as a storyteller. Combining the topic of heaven with the gentle pizzicato and pure, clear tone of Shaw’s voice changed the mood of this traditionally upbeat song to one much more somber and thoughtful.

Shaw’s version of "Angel Band" is an especially unique composition. The quartet plays with no pressure applied to the bow so only soft, breathy whispers of notes are heard. This technique is used throughout the piece. During swells in the song, the bow speed is increased dramatically without pressure being added, producing a sound that is powerful and almost frantic but still soft. It was truly breathtaking to hear all four members of the Jasper String Quartet brilliantly executing this technique so the SECU Auditorium was filled with a roaring whisper. One might imagine that the fluttering of an angel’s wings would sound quite similar.

The third song, "I’ll Fly Away," begins with the simplest of instrumentation. The first violin plays back and forth across the upper three open strings – the first notes every beginning musician experiments with – and the notes that fill a concert hall before every concert as musicians tune. Shaw took these commonplace, reputably boring notes and turned them into a complex and beautiful harmonization. The conclusion of this piece signaled the end of the set and garnered an enthusiastic standing ovation.

Following the intermission, Caroline Shaw was welcomed to the stage by the NC Secretary of State Elaine Marshall, who read a tribute written for Shaw by Governor Cooper. Shaw was commended by the governor for being an inspiration to North Carolinians and people everywhere and for her work in all realms of music and music education, among other accomplishments. It was a rightly celebratory tribute, and the audience seconded the governor’s words with warm smiles and applause.

Concluding such a unique and emotionally powerful concert was a challenging feat, but the Jasper String Quartet, joined by Shaw as second viola, kept the audience engaged until the very last note of Johannes Brahms’s String Qunitet No. 2 in G, Op. 111. It was a rare treat for the audience to hear Shaw, trained as a violinist, play the viola, and she did not disappoint. Her beautiful tone, enhanced by sweet vibrato, blended well with the other members of the ensemble. The extra lower voice added an additional layer of richness and warmth to the tone of the piece. Like the Haydn quartet earlier in the program, this Brahms score gave each instrument an opportunity to shine, and all the members of the quintet played their solos passionately. In addition, first violinist J Freivogel can be commended for his ability to step away from the spotlight and serve as an echo to other instrument’s melodies. The final movement of the piece, focused around a rather humorous melody played joyfully by the quintet, put a smile on the faces in the audience, providing a happy ending for an enjoyable performance. The audience clapped long after the five musicians left the stage.

Judging from this performance, Chamber Music Raleigh’s 2018-19 season will be a series of concerts worth attending.  Do not miss the next programt in the series, scheduled for November 18, once again at the North Carolina Museum of Art. The Borromeo String Quartet, of which the first violinist was born in Durham, will be performing. It is sure to be another unique and memorable concert. For details, see our calendar.