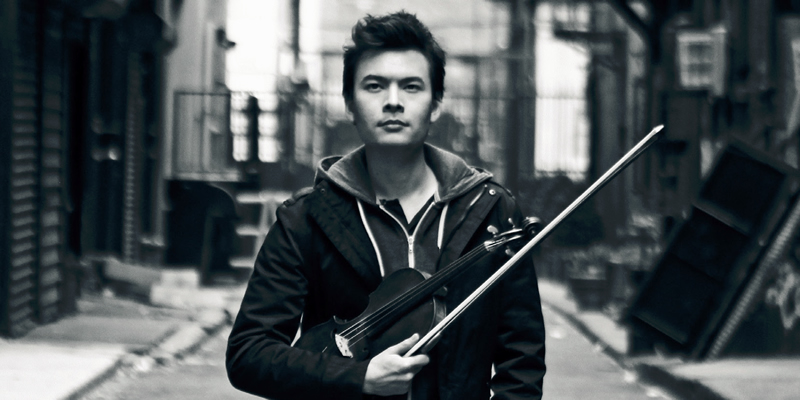 I had heard about Stefan Jackiw (ste-fan jah-keev) and was looking forward to hearing him play but nothing prepared me for his intense musicality and personal approach to the magnificent Brahms Violin Concerto, Op. 77. Eschewing the grand audience-pleasing violinistic gestures for the purely musical, Jackiw's subtle approach to the familiar concerto was distinctive and to me, pleasing and logical.

Maestro Gerard Schwarz started the concerto at a leisurely pace, a tempo which seemed to suit the soloist. Jackiw aced the cadenza, originally composed by Joseph Joachim, Brahms' old friend and the dedicatee of the concerto. Occasionally, especially in the first movement, Jackiw would play so softly that the orchestra had difficulty matching his sound. But by the second movement this was no longer a problem.

Oboist Randall Ellis played the sublime oboe solo which opens the second movement softly and superbly. The softest passages of this Adagio were pure bliss, the orchestra playing so quietly that one sat up straighter in order not to miss a note or a phrase.

The third movement, a rondo marked simply "Allegro," was played in a straight forward manner with only a slight lift on the first B-natural, and not again. The soloist played the whole movement with impeccable intonation and without excessive vibrato. The young man certainly earned his standing ovation. Maestro Schwarz invited the soloist to play an encore; he complied by playing the Largo from Sonata No. 3 in C for solo violin by J. S. Bach.

After intermission, we were treated to more of Stravinsky's Firebird than most orchestras play. In fact, Stravinsky extracted three different suites from the original 47-minute ballet, premiered in 1910. The 1911 Suite eliminated only some of the stage music (music needed to get characters on or off stage, etc.) but stopped after the "Infernal Dance of the King Kastchai." In 1919, Stravinsky arranged another suite in which the major difference was to reduce the huge orchestra (4 or 5 winds per section – 3 flutes plus piccolo, etc.) to a more conventional sized one, with winds by twos, thereby encouraging smaller orchestras to perform his music. There are other differences – revised articulations and the shortening of some movements. But the most significant was the inclusion of the "Berceuse" (lullaby) and the imposing "Finale" which follows it.

Having at his disposal the necessary forces, Maestro Schwarz could afford the larger orchestra required by the 1911 Suite, but he added also the "Berceuse" and "Finale" from the 1919 version. It was nice to hear the opening played as written, with the E-string tuned down to D for the opening harmonics ("scordatura") as well as the inclusion of the "Supplicant of the Firebird" and the "Play with Golden Apples" sections.

The principal flute, Jake Fridkis has a beautiful big tone, oboist Ellis again shone in the softest passage I have ever heard an oboist play, bassoonist George Sakakeeny was magnificent in the "Berceuse." and horn-player Kevin Reid played the beginning solo of the "Finale" with sublime calm. Only a minor trombone blip near the beginning of the piece detracted this from this near-perfect performance.

The concert opened with a change from the printed program: instead of the "Symphonic Fragment" from Die Liebe der Danae by Richard Strauss, we heard Franz Liszt's Hungarian Rhapsody No. 2, with big thick string unisons, gypsy-infused melodies and two magnificent clarinet cadenzas, played by Shannon Scott. This was the perfect opener for the Brahms concerto, which has its own share of gypsy influences in the last movement.

This was a very satisfying concert and one that will long stay in the memory of many of us who must now deal with symptoms of "EMF withdrawal."