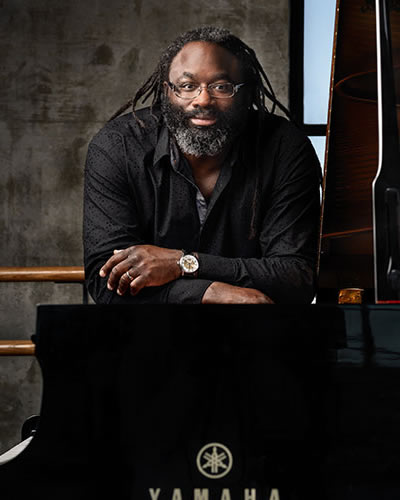 The mid-week Eastern Music Festival recital offered by Awadagin Pratt in Dana Auditorium drew a small but clearly devoted crowd of patrons for an exceptional program of music by Brahms, Beethoven, Russian-American pianist (and visual artist, and poet) Lera Auerbach, and Belgian-born César Franck. Pratt has been a regular visitor to Greensboro for many summer seasons, so he has built a loyal following. He and William Wolfram head the EMF's five week piano program, which this year includes a collaborative piano track.

The program reflected Pratt's wide-ranging enthusiasms. To even the most familiar scores he invariably brings fresh insight, delivering (even when dealing with a summer cold) interpretations that cast his selections in new light. Thus the set of four Ballades, Op. 10, by Brahms, early works that nonetheless foreshadow the autumnal evocations of the composer's much later scores, sounded vibrantly fresh under Pratt's fingers, following from selection to selection almost without pauses and thus giving the set a sense of unity not always clear elsewhere.

Departing from the printed program, which was to have continued with Beethoven's Sonata No. 7, Op. 10, No. 3, Pratt played instead the master's three-movement Sonata No. 31, in A-flat, Op. 110, a score that seemed of a piece with the Brahms in terms of profundity, as realized on this occasion. The late sonatas – the last sonatas – give patient and perspective listeners glimpses into another world, a place Beethoven inhabited most notably in these solo works and in the late quartets. These are not Sturm und Drang works but rather spiritual ones with exceptional insight, rendered in this particular instance by an artist who took us along on his spiritual and emotional explorations, guiding every step. The audience listened in rapt silence, seeming to savor each measure, drinking in the progression from the opening Moderato cantabile molto expressivo (with emphasis on "molto") through the brief respite provided by the faster second movement, followed by the profound Adagio ma non troppo and then, at the end, a brief concluding Allegro. It was in that other-worldly slow movement that Pratt achieved the evening's most notable artistry; those fortunate enough to experience it were briefly relieved of concerns about the future of the world, politically and otherwise, and transported to a different, better, more hopeful place. One almost wanted it not to end, so serene was the music – and Pratt's art, too. Yet the short finale was in retrospect required, for life goes on. It's up to us to try to make the best of it. Here we had an illustration of what is possible.

The second half was devoted to two somewhat parallel sets of compositions, the first by a true Renaissance person, composer, pianist, poet, sculptor and painter Lera Auerbach (b.1973), whose Chorale, Prelude and Postlude, Op. 31, continued the evening's explorations of light and shade. These pieces contain a lot of truly serene music, offset however by passages of dissonance some may have found off-putting at times; this listener was reminded more than once of similar impressions resulting from Berg's great Violin Concerto and the profound spiritual impression great performances thereof can convey. The composer's treatments of the forms the score presents seemed at once innovative and thoroughly in keeping with traditional norms, despite their spikiness. The set-up came across with even greater impact as these new pieces were followed in a stroke of programming genius by Franck's famous Prélude, Choral et Fugue, a work that – again – took on new meaning on this occasion, thanks to its juxtaposition with the Auerbach score and also Pratt's breathtaking reading, a reading that evoked memories of the composer's very famous Symphony, now rarely heard, and that reminded us again of the basically orchestral scope and power of this pianist's playing. That cheers and a standing ovation greeted him at the end was hardly a surprise. That he rewarded his fans with a Nocturne for left hand by Fred Hersch, the classically-trained jazz pianist, was totally in keeping with Pratt's never-ending drive to expand his repertory and the consciousness of those who hear him play.

The EMF continues through July 28. For details, see our calendar.