Warhorse and Neglected Fare Revitalized at the EMF 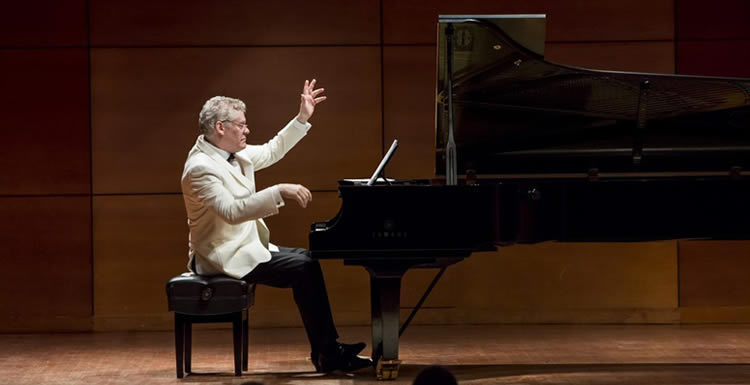 Warhorses of the repertoire always sell tickets, and Guilford College's Dana Auditorium was well-filled with music lovers for the first full concert of the all-faculty Eastern Music Festival Orchestra. Music director Gerard Schwarz's enterprising program included less frequently heard Schumann and Dvořák and a brief world premiere, all anchored by a Tchaikovsky chestnut. Beyond interpretive mastery, some of this concert's revitalization effect was enhanced by Schwarz's using a late 19th-to-early-20th-century orchestra seating. The first and second violins were seated on opposite sides of the podium. Cellos and double basses were seated behind the first violins on the audience's left. Violas were seated behind the second violins on the right.

Robert Schumann was heavily influenced and inspired by literary sources. His Overture from Manfred, Op. 115 (1848), was the composer's synthesis of the brooding mood of Lord Byron's play. Schwarz led his musicians in a performance that captured the work's many sudden tempo changes and frequent shifting density of scoring. The full rich sound of the cellos contributed much to the sense of haunting melancholy.

Tchaikovsky's Piano Concerto No. 1, in B-flat, Op. 23, is one of the most frequently heard works in the repertoire. I have always been disappointed that the composer dropped further use of the terrific first theme, heard after the blazing opening fanfare, and my mind has often wandered during the remainder. Not so in this performance! Schwarz and his dynamic soloist, William Wolfram, blasted away any cobwebs and dust from the score and delivered an electrifying performance! There was never any lack of power with Wolfram, towering like an ex-football player and attacking the keyboard with a will. His sensitive and remarkably clear playing of the bridge passage before the second theme held every listener's attention. Another memorable moment was when Wolfram took up the delicate melody played by principal flute Les Roettges at the beginning of the second movement. That movement's cello solo was spun seamlessly by principal Neal Cary. Every section of the orchestra was in top form, with rich strings, strongly characterized woodwinds, and brilliant brass. Wolfram, Schwarz, and orchestra richly deserved their long, sustained standing ovation.

Very few conductors can even approach Schwarz's dedication to the performance of American composers of the past and present. Among the most prominent of the latter is Augusta Read Thomas (b.1964), whose "Plea for Peace" (2017) was initially scored for string quartet with a soprano vocalise. It was commissioned by the University of Chicago to commemorate the 75th anniversary of the world's first nuclear reactor. This concert was the world premiere of Thomas' arrangement of the piece for flute, oboe, trumpet, and string orchestra. Harmonies and textures constantly shift over the course of the short work. The small trumpet was muted throughout, and I initially thought there was an English horn. Some parts reminded me of microtones of György Ligeti.

The Symphony No. 7 in D minor, Op. 70, of Antonín Dvořák (1841-1904), is unjustly neglected in favor of the "New World" Symphony. The scoring is simply magnificent in every detail. Schwarz and his players delivered a breathtaking performance. The tempestuous first movement featured full, rich contributions from the strings, not least from the ominous, dark rumblings of the cellos. The slow movement abounded in wonderfully detailed solos such as clarinetist Shannon Scott's hushed melody above pizzicato strings during the opening. Kevin Reid's brilliant horn solo was superb. Near the end, a hushed dialogue between oboist Randall Ellis and the clarinet was ravishing. Schwarz brought out the Scherzo's many cross-rhythms masterfully before building the turbulent strands of the finale to a triumphant climax, enthusiastically received by the audience.

Note: The pianist may be heard again in an all-Mozart program on July 4. For details, click here.