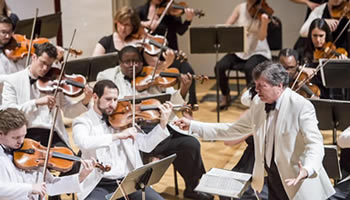 When the E-string broke at the climax of the last movement of the Max Bruch Violin Concerto No. 1 in G minor, scarcely a member of the audience realized what had happened – but musicians in the hall all grinned as the stricken soloist declined the outstretched violin of the concertmaster and played the last two lines of the concerto with aplomb and panache, but two octaves lower than planned!

The soloist was Jeffrey Multer, the lean and lanky concertmaster of the Eastern Music Festival Orchestra and a distinguished veteran of many prestigious chamber music ensembles and other "close encounters of a musical kind." His playing throughout the concerto was gorgeous, especially the pure high passages on that ill-fated E-string, but expressive in all registers, with some particularly breathtaking pianissimo passages in the second movement. At the end, the audience roared its approval and leapt to its feet in a genuine and well-deserved standing ovation.

The superb violin soloist was accompanied by the master conductor, Gerard Schwarz, who led three different symphony orchestras in the course of the evening – two 70-piece student orchestras, as well as the fully professional Festival Orchestra which played the first half of the concert. Maestro Schwarz has been the artistic director of the Eastern Music Festival for the past 10 seasons and has bestowed on the EMF the cachet of excellence that accompanies internationally known musicians.

The concert opened poetically with an excerpt from the 4th act of Hector Berlioz's monumental opera, Les troyens, (The Trojans). Depicting the Carthaginian countryside with creatures both natural and mythological, hunters' horns interrupt the lovers and finally a massive storm, all a musical allegory to the awakening of passion between Aeneas and Dido who have taken shelter in a cave. It occurred to me, while listening to this magical music how many musical storms there are – from Beethoven to Bartók and Vivaldi to Wagner, storms seem to excite the imagination of composers. There was some outstanding horn playing from Kevin Reid with uncanny replies from off-stage musicians.

At intermission the Festival Orchestra left the stage, to be replaced by the first of two student orchestras. Between them they would divide up the Third Symphony in F minor, Op. 90, by Johannes Brahms. Brahms' four symphonies are each very different from the other and always technically difficult and musically challenging. Of the four, Symphony No. 3 is perhaps the most difficult to play. The students, some as young as 14 and none older than 23, have been on campus less than a week but nonetheless produced credible performances of this difficult work.

To be sure, there were occasional imbalances as phrases over-lapped and replaced each other. And the awkwardness of the time signatures of the first movement (6/4 and 9/4) creates ensemble problems for even the best professional orchestras. But the musicians acquitted themselves honorably, and in the case of the principal horn of each orchestra, with distinction!

If this opening orchestral concert of the 57th season of the Eastern Music Festival is any indication, we can look forward to a delightful summer of musical marvels. For the entire month of July, the student orchestras, under the direction of Maestros José-Luis Novo and Grant Cooper, will perform in Guildford College's Dana Auditorium each Thursday and Friday night at 8:00 pm, and the professional Festival Orchestra, conducted by Maestro Schwarz, will perform each Saturday night at the same time and in the same location. The rest of each week, there are various performances of many different sorts at multiple times. Visit our calendar for details.