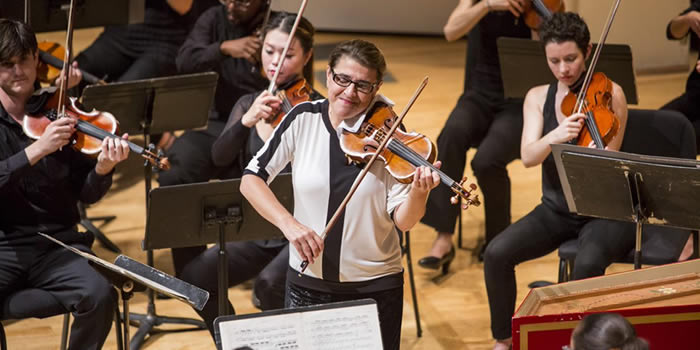 Enthusiastic music lovers and students were on hand in Dana Auditorium, on the bucolic Guilford College campus, for the fourth concert of the Fifty-seventh season of the Eastern Music Festival. This "Signature Performance" concert featured a festival favorite, violinist Nadia Salerno-Sonnenberg, both as soloist and as collaborative artist in expanded or augmented chamber works.

Argentine composer Astor Piazzolla (1921-92) played many instruments and was a virtuoso on the bandoneon, an extremely complex member of the accordion family. He took the classic tango, a lewd dance of the brothels of Buenos Aires, and added aspects of jazz and post-Romantic music (such as Bartók and Stravinsky) to create the new tango.

Piazolla's Cuartro Estanciones Porteñas (The Four Seasons of Buenos Aires) did not start as a suite modelled after Vivaldi's popular set. "Buenos Aires Summer" was composed in 1985 as incidental music to a play, "Melenita de Oro," by Rodriguez Muñoz. The composer added his takes on "Spring" and "Winter" in 1970. The set was composed for a quintet consisting of violin, piano, electric guitar, double-bass, and bandoneon. In 1996-98, violinist Gidon Kremer commissioned Russian composer Leonid Desyatniko to arrange Piazolla's set for solo violin and string orchestra. Desyatniko converted each season into three section pieces (fast-slow-fast) and implanted allusions to Vivaldi, but with a twist. Since seasons are opposite in the northern and southern hemispheres, a bit of Vivaldi's "Winter" turns up near the end of Piazzola's "Spring," and so on throughout the set.

For this performance of Piazolla's Four Seasons, Salerno-Sonneberg held forth like a rock star in the middle of a chamber orchestra drawn from the EMF faculty. It consisted of five first violins, five second violins, four violas, four cellos, and two double-basses. Their white-hot performance was both eye and ear opening and stretching! Desyatniko called for a cornucopia of exotic string techniques to conjure an evocation of Piazzolla's original. A coarse scratchy sound was made by bowing heavily below the bridge. Among a bevy of pizzicatos was extensive use of the Bartók or "snap" pizzicato in which the string is plucked so hard it rebounds off the fingerboard. One suggestion of Vivaldi's "Winter" was a chilly glissandi played by pizzicato with the eerie sound of fingers up and down strings. Salerno-Sonnenberg, besides fiery solos, shared several duets with the first chair players, especially first violin, viola, and cello. She and her colleagues really dug into the expressive possibilities of their solo lines with soaring highs and down and dirty pathos. The elusive hints of Vivaldi were knowingly acknowledged by the audience's laughter.

Repeated curtain calls were rewarded with what Salerno-Sonnenberg called a further "twenty seconds of Piazolla," a more lyrical fragment.

Souvenir de Florence in D, Op. 70 by Pyotr Ilyich Tchaikovsky (1840-93) was originally composed for a string sextet consisting of two violins, two violas, and two cellos. The composer soon arranged it for a chamber orchestra with added double basses. Salerno-Sonnenberg took over the first violin chair and added players to form and ensemble of five first violins, six second violins, five violas, five cellos, and two double-basses. The first two movements have a singing, Italianate quality. The main theme of the slow second movement was written in Florence, Italy. The last two movements are dominated by very Russian sounding folk-like themes. After the busk opening of the first movement, Salerno-Sonnenberg spun out the warm melody seamlessly. One of the many felicities of the ensemble's playing was the gorgeous, hushed ppp sound of the first violins playing as if one. Rich heart-felt melodies abounded in the breathtaking Adagio, first from Salerno-Sonnenberg, then the plaintive pleading of the first viola, cumulating in cellist Beth Vanderborgh's richly nuanced solo. Salerno-Sonnenberg secured extraordinary rhythmic clarity in the rousing final two movements. Every strand of the final movement's fugue was transparent and readily followed.

Multiple sustained standing ovations were rewarded by a plush and effusive performance of the well-known Irish song "Danny Boy."