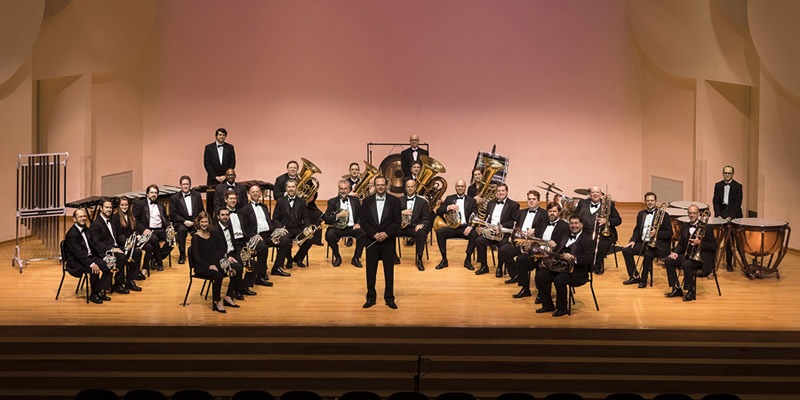 The North Carolina Brass Band, led by Dr. Brian Meixner, is an impressive group. Now closing its fourth season, the Band is a relatively young ensemble compared to its accomplishments and the breadth of its activities. Two full-length recordings, featured appearances at national music festivals, superstar guest artists, and a year-round youth troupe all sound like bullet points from the resume of a much more entrenched institution.

Attend one of their concerts, however, and you'll immediately recognize how this group has managed to do so much so quickly: their skill and musical scope are par excellence.

Friday night's offering in Greensboro encompassed much of what the group has to offer. Entitled "Brass on Broadway," the closing performance (repeated in Winston-Salem on Saturday) of NCBB's 2017-18 season delved into classic Americana and showcased a thrilling guest vocalist.

Entering the stage to warm applause, Maestro Meixner wasted no time: an economic flick of his baton set the ensemble alight with the apropos "Strike Up the Band" by George Gershwin. Featuring pointed hits, epic sweeping runs, colorful percussion, and that irresistible swing, the opening number set the mood brilliantly.

Addressing the audience, a gracious Meixner thanked us for our presence before introducing the evening's special guest, soprano Lindsay Kesselman. Her biography in the evening's program illuminated Kesselman's standing in the world of opera and art song. But would her Broadway performances convince? With an agile performance of "The Lonely Goatherd" from The Sound of Music, Kesselman put any doubts to rest. This soprano sounded as comfortable with Rodgers as she would with Rossini.

With "Think of Me" (The Phantom of the Opera) and "Till There Was You" (The Music Man), Kesselman, Meixner, and the musicians of the NCBB balanced their initial lightness and energy with some seriousness and balladry.

The cusps of the intermission formed a divided tribute to Leonard Bernstein, who would have turned 100 this August. Closing the first half with "Suite from West Side Story" and opening the second with the Overture from Candide, the band demonstrated its ability to tackle rapid and difficult shifts of meter, tempo, and texture. Under Meixner's direction, the band marched, swung, and wailed through a touching homage to one of America's great musicians.

In terms of orchestration and theatricality, the evening's highlight was Rodger's "Slaughter on Tenth Avenue." Featuring a wealth of colors from the percussion section, including gunshots and sirens, this kaleidoscopic sound journey garnered enthusiastic applause. Kudos to percussionists Danny Frye, Jared Steward, and Steve Barnhart.

Rejoining the band, Kesselman delighted the audience with one of the evening's more recent numbers, "Popular" from Stephen Schwarz's Wicked.

On the page, the program's closing number looked like an odd choice. Jerome Kern and Oscar Hammerstein's "Ol' Man River" (Showboat) is famous as a ponderous showcase of the deepest bass voices. Meixner, however, managed to dig up one heck of a swinging arrangement.

The star of this number was drummer Frye, his sticks dancing over the kit with endless energy. The audience rewarded the band's performance with a standing ovation.

Bravo to Meixner and the NC Brass Band on completing an astonishing four years. I'm certain I speak for many North Carolinians in looking forward to a fifth.

The North Carolina Brass Band repeats their program on June 3 in Clemmons in a concert sponsored by the Arts Council of Winston-Salem & Forsyth County. See the sidebar for details.