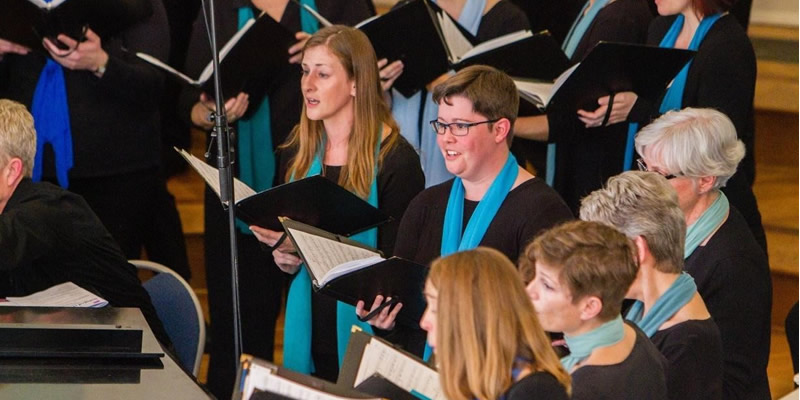 Women's Voices Chorus, under the direction of Allan Friedman, performed before a packed audience at First Presbyterian Church in downtown Durham. The opening selection was Ariel Ramirez's Misa Criolla. It was clear from the start that Friedman was after more than the precision ensemble this group is recognized for, but also exquisite shaping of phrases and interpretation of the music from inside out. The lively Latin American flavored setting of the Ordinary of the Mass featured guitar and oud by Salome Sandoval McNutt and Rick Keena, percussion by John Hanks, Leigh Denny and Jennie Vaughn, and flute by Amy Glass.

Vocal soloists were McNutt, Rachel Spencer, Carli Webb, Wendy Hua, and Barrie Wallace, all outstanding. From the popular and appealing Gloria to the tender and touching Agnus Dei, it was a delight to hear.

The extended applause for "Iraqi Peace Song" was not only an appreciation of a very fine performance by the soloist, Tatjana Zimbelius-Klem, and the choir and accompanists, but also for the sentiment of the traditional Iraqi text – a simple prayer for peace, and the haunting music provided by Lori Tennenhause.

The middle section of the concert shared music written in honor of or by women named Miriyam, Maria, or Maryam from each of the three Abrahamic religions. The "Ave Maria" by William Hawley used striking impulses and deep, rich harmony to portray the wonder of the young woman as she hears the greeting of the heavenly angels.

"Koowu" is a song about a bird that will soon die, lest it fly. The longing for freedom is a core of life. The wistful melody sung in unison by the chorus conveyed this longing with heart-tugging passion. The words and music are by Maryam Khoury whose parents were Palestinian refugees.

"Mi Chamocha," by Cantor Linda Hirschhorn, was sung in Hebrew by the chorus a cappella. It proclaims the majesty and the might of God who led them out of slavery.

The Renaissance motet "Suscipe Verbum Virgo Maria," attributed to Suor Leonora d'Este was sung with marked choral balance and skill by the Chamber Choir. The polyphonic structure was conveyed masterfully. The presumed composer was the daughter of the notorious Lucrezia Borgia.

The next selection was the striking setting of the Magnificat by Canadian composer Christine Donkin. Soloist, Kim McCorkle, with a pure, uncluttered vocal timbre, started with what could have been an incipit, but it continued with the chorus picking up vocalizations on selected vowels and extending them. The effect was mystical, suggestive of an echo chamber six to eight times the size of Duke Chapel if you can imagine such a sonic experience.

The final piece on the program was Friedman' s dramatic choral depiction of the horrors and tragedies of the brutal immigrations of the 21st century. Miriyam, Maria, and Maryam – a Refugee Song seeks to describe, without taking a political position, the sorrows and suffering of the multitudes of displaced individuals and families because of wars and natural disasters.

Stories of three fictionalized immigrant women were told from the historical perspective of the massacre of Spanish Jews in 14th-century Catalonia, the harrowing flight of Ottoman Greeks in 20th century Turkey, and the forced exodus of Arabs from 20th century Palestine. The accounts of the three immigrant women were told by narrators speaking in native languages. There were sung solos and choral creations, as well as interpretive dancers. A variety of percussion instruments, including piano played with mallet, a device called a thunder box, and other imaginative and creative musical forces combined for a most enticing and moving experience.

The excellent vocal soloists were Britt Kelly and Leah Vallario. The effective narrators were McNutt, Tina Bessias. Heeda Chergui, and Ann Harrison. Choreography was by Kaity Granda, with Elizabeth Motyka, and the dancers. Dance soloists were Granda, Rebeca Drake, and Natalia Schradle, and other dancers were Kristen Barker, Anne Bryan Griffiths, Lisa Gangarosa, and Motyka. The dancers, moving gracefully between performance artists and audience, added significantly to the ethereal quality of the piece. Friedman's work was effective and moving.

Thinking back through this concert, I cannot recall a single thing that was not in the right place and performed up to the high standard of excellence already established by this outstanding ensemble. It was a well-prepared concert, smoothly accomplished in a fully satisfactory manner. Bravo to all.