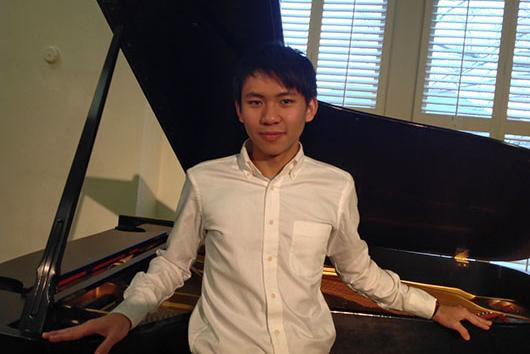 This preview has been provided by the Duke University Department of Music.

Aaron Copland: The Tender Land, Suite from the Opera

Jerry Chia-Rui Changis a senior who studies piano at Duke with Professor Pei-Fen Liu. This is his second time winning the Duke Symphony Orchestra Concerto Competition. Prior to coming to Duke, he was named 2007 National Champion in the Mandarin Daily News Piano Competition and was a Finalist in the 2008 Gina Bachauer International Junior and Young Artist Piano Competitions in Salt Lake City. A three-time National Champion in the National Piano Competition sponsored by the Ministry of Education, Taiwan, in 2009 he presented a solo piano recital in Taiwan's National Concert Hall, sponsored by Steinway & Sons, New Art Inc., and the Ministry of Education Republic of China.

In July 2000, he made his major orchestra conducting debut, leading the National Symphony Orchestra in concert at the Kennedy Center in Washington, D.C. Mr. Davidson has guest conducted orchestras in Austria, Finland and the United States, including the Charlotte and Akron symphonies, as well as the Symphony Orchestra and Choral Union at the Oberlin College Conservatory of Music, where he held a residency. He has held the positions of Associate Conductor of the Wichita Symphony Orchestra, Professor of Music and Director of Orchestra at Wichita State University, Conductor of the Cleveland Orchestra Youth Orchestra, and Associate Professor of Music at the University of Akron.

About the Duke Symphony Orchestra

The Duke Symphony Orchestra, directed by Harry Davidson, numbers some 80-100 players and draws its membership almost entirely from the student body.

The Duke Symphony Orchestra, open to all members of the University community by audition, performs orchestral repertoire of the 18th through 20th centuries. Since the spring of 2004, the DSO has made memorable, annual trips to Beaufort, South Carolina, to play benefit concerts for the Duke-affiliated Keyserling Cancer Center, raising a combined total of over $250,000. The Pops Concert on the East Campus Quad is a beloved Labor Day Weekend tradition that is entirely planned and carried out by the student-run Orchestra Committee.

Each year the Symphony's programs are centered around an overall theme, which may be a specific composer and his influences, a musical genre such as opera, or a group of interrelated composers.