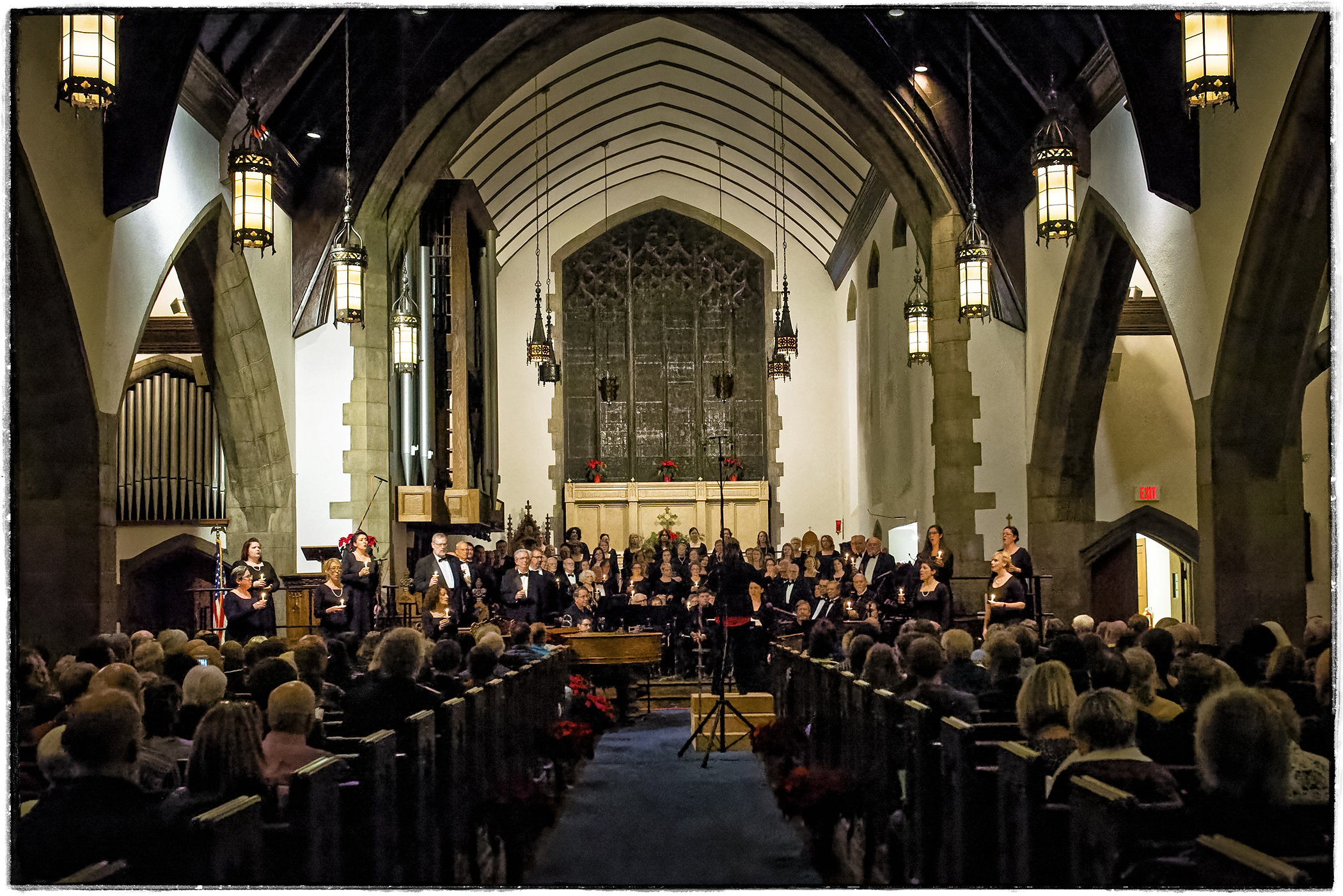 The Asheville Choral Society, conducted by its artistic director Melodie Galloway, presented its second concert of the season Saturday evening at Central United Methodist Church. Dan Forrest's Jubilate Deo was the featured work of this concert. An intelligent choral work that had its premiere less than two years ago, Forrest's work is likely to become a staple of the choral repertoire for American ensembles seeking to embrace diversity and ecumenical understanding. The work uses Psalm 100 as its principal text, but presents portions of it in each of seven languages of significance in contemporary United States of America: Hebrew, Arabic, Mandarin Chinese, Zulu, Spanish, Latin and English. Its message is clearly that people of different backgrounds who believe in a higher power have more in common than they do of differences.

Forrest, a mid-career composer who lives in Greenville SC, writes in a style that reminds me of Andrew Lloyd Weber's musical theater. The music is competent, clever and accurate but always written with the intent to remain accessible to a large audience, seldom including passages challenging to the ear. To this critic, the most interesting moments of Jubilate Deo were in the fourth and fifth sections, where Forrest moved out of that comfort zone.

For the Forrest work, the Asheville Choral Society was joined by choristers from UNC-Asheville, where Galloway chairs the music department. Also included were the thirty voices of the 4th and 5th grade choir of Carolina Day School. There is a certain allure to a massed choir joined to sing a major choral work. Indeed, Galloway is quoted in the advance publicity as saying "Listeners should expect ... to be blown away by more than 200 singers."

But there are also challenges for a massed choir. It takes conscious effort by choristers and conductor to preserve the intimacy and finesse that comes more readily with a smaller vocal ensemble. It takes discipline to rein in the adult voices so that the juvenile voices are in balance, enabling the tonal contrast of young voices to shine through. Another challenge is to take the sound produced by the musicians (accompanying chamber orchestra, soloists and choir) and match it into the hall acoustics. Central United Methodist Church is a relatively small space with live acoustics, not an opera house. I found myself wondering if this performance might have been better had the ACS given two performances, each with half the adult choir more in balance with the children.

The concert began with J.S. Bach's "Kommt, ihr Töchter, helft mir klagen," the Prologue to Part I of his Passion According to St. Matthew. In the Elgar-Atkins edition, the dynamics never rise above a single f, and there is frequent usage of p and mf to provide contrast. A specific example would be "Seht ihn – Wie?" (forte) followed by "als wie ein Lamm!" (piano). Dramatically this makes sense: the query "See him – How!" is bold, while the response "like a lamb" is gentle and unexpected to those who expected the Messiah to be a powerful king figure. I felt a lack of this subtlety as performed Saturday.

That lack of finesse continued into the first section of Dan Forrest's Jubilate Deo where the children's voices did not provide the contrast intended by the composer. The kids were overwhelmed by the adult voices. However, contrasts improved in sections 2 through 6. "Ve adthdor vador" featured mezzo-soprano soloist Rachel Hansbury with the adult choir delivering a text that mixed Arabic and Hebrew accompanied by the chamber orchestra with prominent parts for harp, cymbals, alto flute and clarinet. "Ta cao chang de yang" added soprano soloist Meredith Mormann, used organ, and remained subdued. I noticed the conductor with her fingers to her lips, the classic move of a conductor reining in the dynamics.

Perhaps the best sections of Forrest's work, and certainly the most appealing in this performance, were the next two. "Ngokujabula!" (which translates from the Zulu as "with great joy") has extended passages where the 4/4 measure is divided into 16th notes in a 3+3+3+3+2+2 pattern, an African beat that is infectious. A boy soprano joined the soprano for the following section, a quiet Spanish "Bendecid su nombre" ("bless his name") that provided lyrical moments, with the soprano soaring above the final chords.

In the next section, "Song of the Earth," the single word "Allelujah" is sung by both the adult choir and the children's choir while the chamber orchestra, especially the strings, provide a counter-melody. An instrumental passage then segues into the seventh section, "...Omni Terra!" In this final section, the message of Jubilate Deo (global unity) is underscored with repetitions, in seven languages and mixed tempos, of passages from the previous polyglot movements.

I would have preferred a more nuanced performance, but I applaud the Asheville Choral Society for this early adoption of Forrest's rather challenging Jubilate Deo.