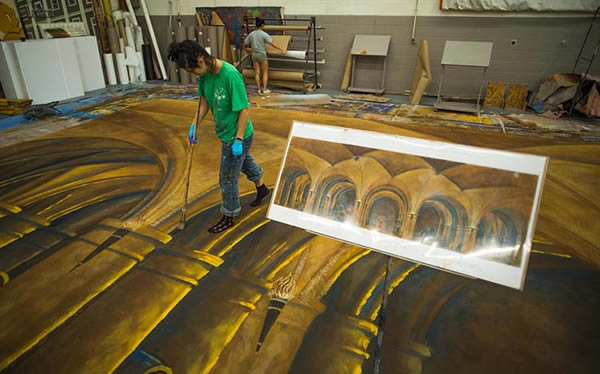 How fortunate for opera buffs that two of Gioachino Rossini's most popular operas have been given outstanding performances within a month (and 35 miles) of each other. Last month the Greensboro Opera presented the ever-popular Barber of Seville, and this weekend the Fletcher Opera Institute of the University of North Carolina School of the Arts offers a superlative presentation of La Cenerentola, Rossini's version of the popular Cinderella fairy story. In this opera, composed by Rossini in 24 days, the wicked step-mother is replaced by an uncaring stepfather and the fairy Godmother by a Philosopher (with no magic pumpkins or lizards), but the other main features remain familiar.

The role of Cinderella (whose real name is Angelina) was played and sung by the imposing and beautiful Kathleen Felty, whose gorgeous dark mezzo-soprano voice filled the Stevens Center and thrilled the large audience, especially with her closing aria, "Nacqui all'affanno ... Non più mesta," in which her mastery of the bel canto style was impressive.

Her suitor (disguised as a servant for most of the opera), Don Ramiro, the Prince of Salerno, was sung by Jacob Wright, whose light tenor voice also handled well the difficult arias with their leaps, trills, and flowery embellishments, so typical of bel canto.

Andrew René, masquerading as Prince Ramiro, was a perfect servant Dandini, with an energetic, suggestive baritone voice rich with innuendo. He was the perfect foil for the slovenly stepfather, Don Magnifico, Barone di Monte Fiascone, admirably sung and acted by bass-baritone Cameron Jackson, who kept the audience in stitches with his antics, malapropisms, and rolling eyes.

The two mean step-sisters, Eliza Mandzik as the porcine older Clorinda, and Claire Pegram as the rather avian younger Tisbe, were both very well cast. Mandzik has a lovely strong soprano voice, revealed late in the opera when she sang a lesser aria ("Sventurata, mi credea") with remarkable clarity. I look forward to hearing more from her. Alidoro, the mystic philosopher, was aptly portrayed by the bass voice of Scott Lee, amply bearded and dressed in a Merlin-like gown.

The costumes of Dorothy Austin-Harrell, a graduate student in costume design, were created intentionally without reference to any epoch, but all suited the characters to a tee, as did the make-up and wigs of designer Clara Abernathy, another graduate student at UNCSA.

The UNCSA student orchestra was directed by prestigious guest-conductor Antony Walker with competence and wit. The orchestra was outstanding and was at its peak in the predictable storm scene ‒ what Rossini opera doesn't have a storm? Several parts of the opera featured an excellent men's chorus which was joined briefly but effectively by the women in the throne scene.

Steven LaCosse, managing director of the Fletcher Opera Institute, was the stage director, responsible for such amusing details as the very long pheasant quills which all quivered simultaneously as a dozen servants took dictation from a very drunken Don Magnifico, deep in the wine cellars.

Howard C. Jones of the UNCSA faculty designed and supervised the astonishing trompe-l'œil sets, mostly traditional flat drop-down screens which looked incredibly three dimensional ‒ especially the columns in the palace hall and the vaulted wine cellar. After the last curtain call, LaCosse led a glowing on-stage farewell tribute to Jones, who is retiring from UNCSA.

The evening started before the overture when Chancellor Lindsay Bierman announced that the School of Music of the University of North Carolina School of the Arts had received a gift of $1 million from the estate of artist and philanthropist Jenny Lillian Semans Koortbojian, daughter of school founders, advocates and benefactors Dr. James H. Semans and Mary D.B.T. Semans, to endow merit-based scholarships. Brian Cole, Dean of the School of Music, expressed his gratitude for the gift and named the first recipients of the grant, one of whom was playing bassoon in the evening's production of La Cenerentola.