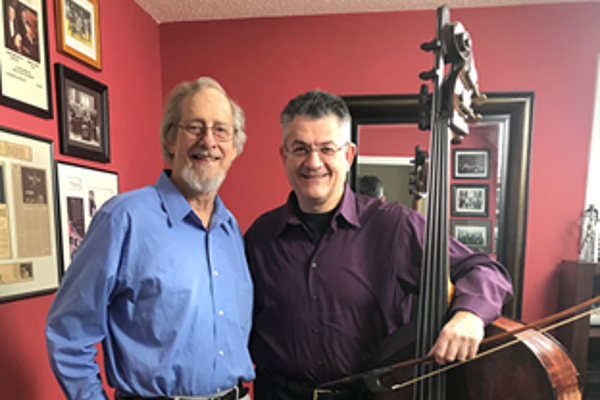 The latest NC Symphony Friday Favorites concert, given in Raleigh's Meymandi Concert Hall, featured three of five pieces from a program offered the day before in Southern Pines and scheduled for the day after in New Bern. The chief attraction was a new concerto for double bass by N.C. composer Terry Mizesko, whose original works and arrangements, too, have enjoyed widespread performances by the North Carolina Symphony (from which he recently retired as bass trombonist) and by numerous other orchestras.

The new piece* is a significant addition to a repertory that is minuscule in comparison with concerti for higher string instruments and even more repressed in terms of actual concert performances. Part of the reason for that is the comparative scarcity of double bass virtuosi. Folks with long memories will recall that the conductor Serge Koussevitzky began his career as a bassist. Much more recently, Gary Karr enjoyed considerable renown for his even greater technical virtuosity. That the NC Symphony's bass section is headed by a Russian-born virtuoso who inspires comparison with these predecessors and with leading world-class proponents of other instruments, too, meant that it was only a matter of time before Mizesko got around to writing a major concerto for his friend and former colleague. The new work is in fact a collaborative effort, jointly forged by Mizesko and soloist Leonid Finkelshteyn.

The 33-minute work falls into four parts, each inspired in large measure by folksong and folk dances. Program notes by Joseph and Elizabeth Kahn contain Mizesko's introductory descriptions, citing Yiddish themes in the opening and closing movements, mention of a march-like second movement, and a summoning up of Mahler and Bruckner in the scherzo. There's a good deal more to it than that. The music is tonal and folk-inspired, but this is beautifully crafted fare, deftly orchestrated (so the solo instrument is never masked by the accompanying forces), and attractively wrought to achieve a steady and logical flow from one section to the next. The solo instrument carries on recurring dialogues with the orchestra, but significantly it also often departs from the band to soar to remarkable heights on its own, sometimes over the others, sometimes almost swimming within the accompaniment.

The soloist played with superb attention to the score's myriad felicitous details, demonstrating levels of technical prowess one might hardly have expected from this giant of the string section. The niceties of dynamics, inflection, color, and phrasing provided constant delight. Conductor Grant Llewellyn clearly relished his work with Finkelshteyn and the strings of the NC Symphony, leading it with his customary keen attention to balance and ensemble. There was radiant playing from the entire string orchestra, with particularly effective call-and-response handoffs to concertmaster Brian Reagin and consistently fine work from the lower strings, including an unusually robust cello section.

Those Yiddish tunes – Klezmer, in part, but not exclusively – give the work exceptional color, but the march in the second movement is haunting in many respects, even as the soloist seems determined to break free from its insistent regularity. The third movement may have been inspired by Mahler and Bruckner but it was Shostakovich at his most sardonic that came to this listener's mind, ultimately offset by a big cadenza that casts this section in an altogether more encouraging light. A skillful and inspired bridge passage brings us to the finale with its buoyant musical cap.

The response of the large audience was enthusiastic, the applause, with a standing ovation, lasting many minutes.

The concert began with a busy piece for strings by Wojciech Kilar (1932-2013), a composer known mostly (if at all) for his film music. The notes suggested "Orawa" may be viewed as a combination of Bartók and Philip Glass although less maddeningly repetitive ‒ so perhaps more akin to John Adams. Its folksy busyness was nicely projected by the orchestra.

Dvořák's familiar Serenade for Strings brought the relatively short program to a close. The playing was fine. The audience went away happy.

In Southern Pines and New Bern, the additional works were Villa-Lobos' Bachiana Brasiliera No. 1 and Jennifer Higdon's "To the Point."

*The concerto was given a trial run at Carol Woods Retirement Community, with piano, as noted in this CVNC review.

That New Bern concert will be presented on Feb. 3. For details, see the sidebar.

For still more information about the Mizesko work, click here.