NC Symphony Bridges a Century with Schubert and Bernstein 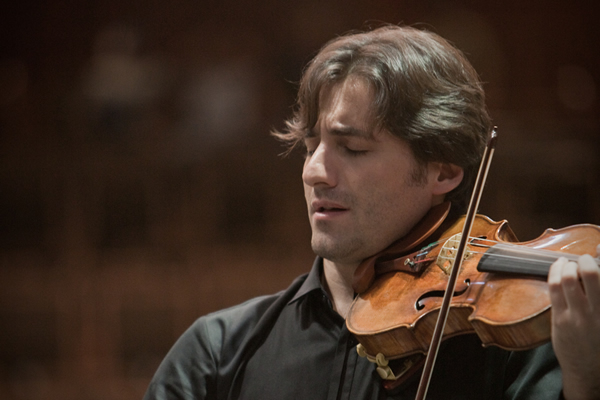 Romantic Franz Schubert and bold, modern Leonard Bernstein might not seem to have a lot in common at first glance. However, despite being at least a century apart, the music of the two can have some parallels. On Friday, January 26, the North Carolina Symphony program was headlined by Schubert's "Unfinished" Symphony but also featured two contrasting Bernstein works. The program was one of several celebrating the centennial of Bernstein's birth, a composer whose more "serious" works are sometimes overlooked in favor of the lovely and popular musicals, West Side Story and On the Town, or the operetta Candide. Associate Conductor Wesley Schulz, a fabulous conductor newly appointed to this post, led the NCS through Bernstein's Fancy Free and collaborated with violinist Philippe Quint for the Serenade, before diving into the tumultuous themes of the aforementioned Schubert.

Fancy Free, a nautical-themed, jazzy romp of a ballet, was actually the impetus for On the Town. Although the music for the latter was entirely new, both share the same premise and free-flowing, rambunctious rhythms and melodies. It's not difficult for the listener to conjure images of flashy dancers or crowded bar scenes while hearing bustling syncopation and unpredictable hemiolas. These brash rhythm effects are beautifully disorienting, much like a crowded city. It goes without saying that the constant meter shifts are no easy feat to conduct, and Schulz did a spectacular job seamlessly keeping both the metrical pulse and sometimes anti-metrical accents or syncopation.

Shifting gears from sailors on leave to Plato and Greek philosophy might seem like a stretch, but the inventive, beautiful themes of Bernstein remain. The work could be more properly titled as a violin concerto, but either way, violinist Quint brought the weaving, inventive dialogue between ensemble and solo to life. Quint, a Grammy-nominated artist, is American but appears and performs internationally. His artistry and passion are apparent. Throughout the five movements of the Serenade, Quint tackled his various roles – strictly solo cadenzas, imitation with the orchestra, leading the melody, or even sometimes performing duets with individual symphony members – with ease. This last moment occurred in the fourth movement, which contained a jaw-dropping but sadly brief moment of duet with the concertmaster Brian Reagin. The communication here was impeccable. The fifth movement hinted of the stormy Schubert to come, with its chillingly sorrowful solo violin melody and battle between minor and major modes. Eventually, cheer won over with sassy moments of jazz-like pizzicato in the low strings and unbridled, rapid-fire passages in the solo. Quint's performance deservingly earned him a standing ovation from the audience before the intermission.

The two movements of Schubert's "Unfinished" Symphony felt like a sort of battle of tonality – simply put, between major and minor. Of course, there are nuances here, but in general, the constant shift (sometimes even within one phrase) controls the tension of the work. The NCS and Schulz definitely drew the utmost life out of Schubert's themes. In the first movement, a lyrical clarinet solo that returned multiple times took the spotlight, along with beautifully dark moments in the low strings. After the first movement's decidedly somber ending, the second movement (Andante con moto) begins with lovely, wide harmonies stretched between members of the high and low strings. Again, the ping-ponging exchange between major and minor is clear here, but unlike the first movement, this movement ends with a triumphant swell to a satisfying, calm conclusion.

Since Schubert's symphony ended with a slow middle movement, atypical for a concert's denouement, Schubert's joyous "March Militaire" ended the program. As explained by Schulz, it very well could have been the missing third movement.

This performance repeats in Raleigh's Meymandi Concert Hall on Saturday, January 27. See our side bar for details.