Give A Root for RTOOT 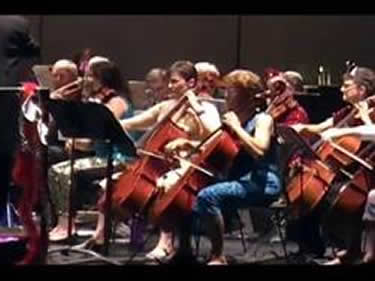 
Really Terrible Orchestra of the Triangle

Well sir, it was a fine show: RTOOT (Really Terrible Orchestra of the Triangle) performing to a sold-out mob at Cary Arts Center. There was a lot of all that you go to a concert for – orchestra members waving to friends and relatives in the audience, costumes ranging from extravagant evening gowns to leotards and a top for the ladies and from tails and top hat to Santa costumes for the gentlemen. Even the instruments were dressed up for the occasion; the violas all had bows on their bows. The double basses had red and green lights tied to the scroll at the top of the neck of their instruments. I do not know what is behind all this, but I fear it will come to no good. At this point, it should be said that conductor Dr. Robert Petters is absolved of all complicity – so far.

The concert was late getting started because they were still trying to pack in those perennial late-comers who couldn't find a parking space closer than four blocks away and for whom there were no more vacant seats. (Ha, ha. I bet they will get here on time for the next concert.)

The concert program, entitled "Silent Night (Please?!)," began after the impresario (Announcer Michael Bacigalupo in the printed program) arrived late because he was behind the late-comers. After he climbed on stage and mumbled an apology, the opening number was launched. It was the familiar music of George Frederick Handel – Overture to Music for the Royal Fireworks. It was a successful performance in that it wasn't played outdoors, it didn't rain, and the pavilion didn't catch fire – all of which happened at the first performance!

The next selection was introduced by the announcer as "modest mouse or gsky," or as he is sometimes known, Modest Mussorgsky. Pictures at an Exhibition is a set of tone poems describing the art on display. Maestro Petters chose for this concert "The Hut on Chicken's Legs (Baba Yaga)" and "The Great Gate of Kiev". The chicken's legs were quite wobbly since the second violins were a whole half-step off pitch. As far as the great gate is concerned, either the brass players were too timid (which is incomprehensible) or there were not enough of them, because this is the first time this critic has ever said "The Great Gate of Kiev" wasn't loud enough!! (Did I say that Dr. Petters was blameless?)

For the next selection assistant conductor Regan Chuhran took over the magic wand! (She's a girl – gasp!) She led the orchestra in the very familiar and lovely Andante from Haydn's Symphony No. 94 ("Surprise"). There were more surprises than Haydn counted on, including Santa hiding in the orchestra, the double bass players twirling their instruments and other antics along with the unprepared fortissimo chord. And wouldn't you know it – the woman conductor got the orchestra stuck on a repeated passage.

Just when it looked like we might hear that repeat forever, the impresario came on the stage and solved the problem by snapping the magic stick in two. Ah, sweet silence. But alas, now the orchestra was stalled. Then Santa rescued the concert by delivering an early gift to the female conductor; a spiffy new baton all dressed up in red lights. It worked, by jingo, and the Surprise Symphony was finished.

After a refreshing intermission, most of the crowd returned to their seats. I don't know what the orchestra members had to drink during intermission, but they definitely played better in the second half. Maestro Petters led them in a rousing performance of the Overture to Nabucco by Joe Green (Giuseppe Verdi). There was one passage of sixteen bars that was played in tune and with a fairly clean sense of ensemble (togetherness). Seriously.

A pretty fair performance of four hits from My Fair Lady almost put the audience to sleep. A spritely syncopated passage in "Get Me to the Church on Time" woke me up just in time to applaud.

For A Christmas sing-along, words to some of the most popular Christmas carols and songs were found on page four of the printed program. Kazoos were handed out for those vocally challenged. I was looking forward to playing "While Shepherds Washed Their Socks by Night" on my kazoo, but alas, it was not meant to be. The audience joyfully joined the jarring mediocrity of RTOOT and actually sang out loud.

Closing the program was Handel's iconic "Hallelujah Chorus" from Messiah. It started out OK, with the audience singing vigorously, but then, like singing "Auld Lang Syne," they got to the point where they knew they didn't know any more of the words – or notes. The orchestra boldly and bravely carried on to the end.

After brief applause, and before the audience could dash to their cars, the orchestra started in on an encore: "The March" from Act 1 of Tchaikovsky's Nutcracker. After they finished that, the impresario urged them to "git it on." And they played it again – twice as fast as before to the audience's utter amazement. Then there were calls to do it again. Maestro Peters, with head hung down, said "I'm sorry. We can't play it any faster than that." And so the concert was over.

It was a reasonable conclusion that all had fun and their ears should heal in three or four days. I say root-a-toot-toot for RTOOT.