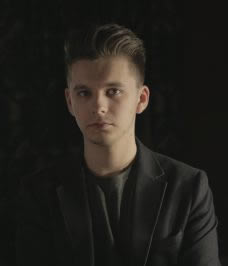 The auditorium of the North Carolina Museum of Art was well-filled with ivory-fanciers for the final concert of Fourth Annual Paderewski Festival. The festival celebrates composer/virtuoso Ignacy Paderewski's tie with the city of Raleigh. Paderewski toured America in support of the post WWI creation of a free state of Poland, and during that time, gave three concerts in Raleigh – in 1917, 1923, and 1939 – and in Durham in 1931. Artistic director Adam Wibrowski has racked up an enviable record of finding some of the finest international keyboard talent that combine technical mastery with real musical depth.

Pianist Kamil Pacholec, who had celebrated his 19th birthday the day before, is a perfect example of Wibrowski's talented finds. Beginning during his high school years, he had won an impressive list of piano competitions, culminating in first prize, best Chopin solo interpretation and best piano concerto performance, at the 47th Frédéric Chopin National Piano Competition in Katowice, Poland.

Pacholec's prodigious technique was immediately obvious in Chopin's Scherzo No. 1 in B minor, Op. 20. He seemed to toss off the high speed dramatic outbursts effortlessly, his fingers almost seemed a blur, but every note was crystal clear. The lovely tangible melody of the slower section soared above its tricky accompaniment by both hands in turn. Pacholec had mastered Chopin's every challenge.

Four Mazurkas from Op. 24 came next – No. 1 in G minor, No. 2 in C, No. 3 in A-flat, and No. 4 in B-flat minor. The original folk dance has a basic rhythm in triple meter with the principal accent on the second or third beat rather than the first. Pacholec captured the moods and subtle rhythms of these evocative works. Dynamics were finely gauged and his phrasing was aptly chosen.

Two selections from Chopin's Études, Op. 25 came next. Pacholec brought out and sustained a mysterious, yearning melancholy in No. 7 in C-sharp minor. His inexorable bass line and cascading arpeggios perfectly conjured up the gusts of "winter wind" mood of No. 11 in A minor.

The pre-intermission program ended with Miscellanea, Op. 16, No. 3 ("Thème varié in A") by Paderewski. The seven unrelated pieces of Op. 16 serve as a compendium of all the compositional techniques he had learned for the piano. No. 3 is a series of stimulating variations upon a noble, restrained theme. Pacholec seemed to weave the theme and four variations effortlessly.

Pacholec's mastery of the school of German Romanticism was displayed after intermission. The Sonata No. 1 in C, Op. 1 by Johannes Brahms (1833-97) makes demands on the player's reserves of power and sonority. The 20-year-old composer completed the work and published it in 1853. The first movement's classical structure extends across a wide range of keys. The slow second movement is a series of variations upon an old German Minnelied "Verstohlen geht der Mond auf" (The moon steals out). Brahms uses a theme derived from the first subject of the first movement as the principal theme of the stormy finale.

Schumann called Brahms' piano sonatas "symphonies in sound." Pacholec brought out this full, rich texture beautifully. His dynamic range was remarkable, and he sustained the sonata's structure throughout all four movements. Fast passages were clearly articulated, and his tonal palette was intriguing.

Fireworks aplenty abounded in the Hungarian Rhapsody No. 12 in C-sharp minor by Franz Liszt (1811-86). Pacholec pulled out all the stops to give Liszt's favorite all the thundering chords and eerie, hushed treble runs it needed.

Pacholec rewarded the audience's standing ovation with Chopin, Etude Op. 25, No. 9 in G-flat. As with everything on the program, his playing was simply immaculate.

We can look forward to future keyboard revelations in the fifth edition of the annual Paderewski Festival in 2018.