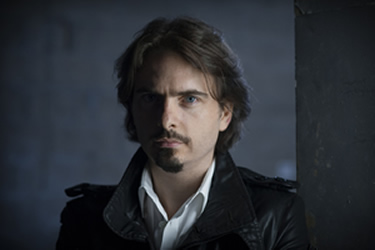 The third of this year's Fourth Annual Paderewski Festival piano recitals featured Polish-French pianist Frédéric Vaysse-Knitter, whose program included not only works by Paderewski and Chopin (staples in most of the Festival's offerings), but also music by Debussy, Haydn, and Liszt. This performance took place at the North Carolina Museum of Art.

Joseph Haydn's Sonata in E-flat (Hob. XVI/52), composed in 1794, is in the usual sonata form: three movements, fast/slow/fast. In at least one way, Haydn's late sonatas, like Beethoven's, present a problem when played on a modern concert grand piano. Thickly voiced, low-lying chords such as those that open this E-flat sonata sound much "thicker" than when played on a fortepiano, thus diminishing the clarity so associated with piano music of the Classical period. Omitting the third (in this case, the G of the opening E-flat chord) would avoid most of this problem. Other than this sonic conundrum, this opening Allegro was cleanly and articulately played. The second movement Adagio lacked the desired singing quality; a slightly faster and less mannered reading would have been welcome. The concluding Finale / Presto flowed elegantly under Vaysse-Knitter's facile fingers.

Some of the afternoon's finest playing followed – book one of Claude Debussy's Images. The three works could not be more different in their construction, but each demands imaginative control of pianistic colors. Hearing these works reminded me of many of the paintings which hang in other rooms of the NCMA, as Vaysse-Knitter found just the right colors for Debussy's sound-paintings. We heard sunlight dancing in the myriad 32nd and 64th notes of "Reflets dans l'eau," envisioned a stately Sarabande being danced in "Homage à Rameau," and delighted in the often-quiet perpetual motion of "Mouvement." This last work is marked Animé (avec une légèreté fantasque mais précise) or Animated (with a fantastic lightness, but precise); Vaysse-Knitter conjured a will-o-the-wisp which fluttered away into nothingness in the final measure, exactly as Debussy wanted.

The last music before intermission was the least idiomatic of Frédéric Chopin's Polonaises, the Op. 44 Polonaise in F-sharp minor. Darker and more introspective than Chopin's other works of this genre, it abounds in what seem to be undeveloped ideas, sections which seem to have little to do with other passages, and a generally disjunctive motion within its already unusual A-B-A form. Vaysse-Knitter did his best to connect the disparate elements. (There's even a Mazurka contained within this Polonaise.) However, his overly-percussive reading of the two non-melodic interludes preceding the tempo di Mazurka did not help in this regard.

After intermission, it was good to hear a lesser-known work by Ignacy Jan Paderewski, his "Légende" in A-flat, Op. 16, No. 1 from Miscellania. While a bit bass-heavy (the NCMA's Steinway was in that mood on this occasion), the shifting harmonies of the quiet passages and traces of Polonaise character in the forte sections (albeit in duple meter rather than triple) were elegantly played. It's interesting to note that Paderewski himself recorded this work and others for the Steinway Duo-Art mechanism, subsequently transferred to disk.

Chopin's first Ballade was exquisite. Vaysse-Knitter emphasized the work's story-telling quality in a gently-lyric reading. Yes, the fiery sections were appropriately so, but the overall impression was one of fine musicianship rather than of technique.

The same could not be said of the final work on the program – "Après une lecture de Dante, Fantasia quasi sonata," from Book II of the Years of Pilgrimage by Franz Liszt. Here, drama and technique rule, from the opening forte tritones through the final fortisissimo/marcatissimo apotheosis where the tritone is turned into the open fifth interval.

As he began this fantasia, the pianist bent low over the keyboard, perhaps to emphasize the coming diabolic journey? The three-voice passages, with a melody in the tenor register, a bass line, and soprano filigree decorations, were especially well-played. The remainder of the work included all of Liszt's pianistic pyrotechnics: the thundering octaves, the crossed-hand passage work, long tremolandi accompanying quieter melodies, all in the "anything you can play, I can play faster and louder" vein. Vaysse-Knitter pulled it all off with aplomb.

The Lisztian bombast was relieved in the delightfully-performed encore, Debussy's "Poissons d'or" (Goldfish), in one final display of Vaysse-Knitter's command of his instrument.

A special word of thanks must go to the Festival's artistic director, Prof. Adam Wibrowski, who seeks out and brings to Raleigh one after another fine pianist for this recital series; all who have enjoyed the superb music-making are in his debt.

The Festival concludes with a final recital on November 12, at 3:00 pm at the NC Art Museum. See our sidebar for details.