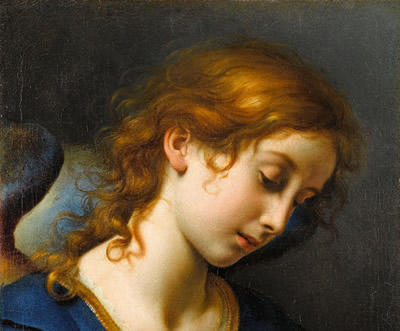 Music is naturally inspired by art, and art is likewise inspired by music. Because of this, it makes sense to combine both in one performance – the Duke University Musical Instrument Collections (DUMIC), along with Duke University's Nasher Museum of Art, accomplished just that. The program, titled "The Sound World of Carlo Dolci," aimed to illustrate the intricate details of the painter Carlo Dolci through music written in his language and his lifetime. The program consisted of mostly vocal music and some instrumental music, all written by Italian composers during Dolci's lifetime (1616 - 1687). Guests artists Laurie Monahan, Catherine Liddell, and Laura Jeppesen presented the program, showcasing their obvious love and deep expertise for 17th century Italian music through their expressive performances.

Before bringing the performers onstage, Claire Fontijn provided a pre-concert lecture explaining the inspiration and purpose for the program. Monahan, an early music expert on the faculties of Berklee and Longy Schools of Music, was the vocalist for most of the songs on the program. Liddell of Boston University played the theorbo and Baroque guitar, and Jeppesen played both the bass viola da gamba and Baroque violin. (Jeppesen teaches at Boston University as well, in addition to Wellesley and Harvard.) Together, the three women created a true Baroque ensemble that evoked the world in which Dolci painted.

All of the composers featured on the program were alive and composing during Dolci's lifetime, including Barbara Strozzi, Girolamo Frescobaldi, Stefano Landi, and more. There was an evenly balanced mix between humorous, lighthearted songs and more solemn, lovelorn selections. The opener, "Amore dormiglione" (a Strozzi tune) was more of the former, with Monahan's illustrative facial expressions and lilting continuo. Plenty of dynamic variation immediately showed the level of communication that the three musicians easily reached.

The arrangement of each song on the program was cleverly done, alternating moods, textures, and meters. The song "Hor ch'e tempo di dormire" was one of the program's highlights. This Tarquinio Merula trio features a relentless, trancelike two-note motif in the bass viola da gamba, bringing to life Jesus' cradle as Mary rocks it and sings to him. What especially sets this song apart is the juxtaposition between baby Jesus' present and future, or calmness and urgent despair in the music. Liddell's lithe theorbo stylings were especially evident in two Kapsberger dances that she and Jeppesen played, showcasing the difficulty in playing these Baroque instruments, which at the very least have more strings than their modern counterparts.

A variety of textures were explored, with strophic, lyrical songs preceding ornamented, improvisatory-style recitative. "Mentre che 'l cor dagli amorisi vermi" (by composer d'India) brought Petrarchan poetry to life with passionate rubato from all three musicians and was another notable performance. In slight contrast, the concert closed with the slightly more popular strophic song "Passachalli della vita" by an anonymous Baroque writer – a tongue-in-cheek message to live while you can, because everyone dies someday – deceivingly set with a joyful tune that was echoed in both voice and instruments.

Paired with a visit to the Carlo Dolci exhibit, this concert was a fabulous exploration into the sights and sounds of 17th century Italy. Although the concert is unfortunately over, the Dolci exhibit is on display until January 2018.