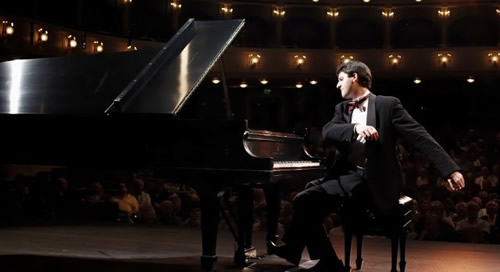 provided by the GSO

A large audience filled Dana Auditorium for a concert of "3 Bs" – Beethoven, Brahms and an unannounced orchestral arrangement of J. S. Bach's familiar Chorale Prelude, "Jesu, Joy of Man's Desiring," from the Cantata BMV 147, "Herz und Mund und Tat und Leben." The Greensboro Symphony, in its 58th season, and 15th under the direction of its music director, Dmitri Sitkovetsky, was in fine shape.

Johannes Brahms wrote few concertos – one for violin, a double concerto for violin and cello, and two monumental piano concertos. The First Piano Concerto, Opus 15, was also one of Brahms' first orchestral works along with the Serenade (Op. 11), both written within months of each other and both in D major/minor. This was also a time of upheaval and anguish in the life of the twenty-something-year-old young man, as his mentor and friend Robert Schumann had attempted suicide and was to live out the last two years of his life in an insane asylum. One can perhaps feel this anguish in the tonal ambiguity that opens the orchestral tutti at the start of the concerto, with its inverted harmonies and prolonged trills. Only in the majestic second theme do we find a sense of repose in the first movement. The second movement (despite its cryptic quotation of the anguished first theme of the preceding movement and whose unusual time meter [6/4] it also shares) is profoundly peaceful and is a musical harbinger of the Deutsches Requiem to appear ten years later. The Finale returns us to more familiar concerto territory with its ritornello style which appealed to the classical composers, Beethoven and Mozart.

The excellent soloist for these performances of the Greensboro Symphony is the Russian pianist and composer, Nikita Mndoyants, winner of the prestigious Cleveland International Piano Competition in 2016. Never overpowered by the orchestra, Mndoyants dominated this concerto. I especially liked the serenity and poetry of the second movement and the restrained power of the third. In the first movement, I found myself wishing that the Steinway piano on the stage might have had more resonance and depth in the low register to balance its brilliant high register. But that may be due to Brahms' dark orchestration, and not to the piano. A charming and mysterious encore followed - we guessed Prokofiev or Mndoyants as the composer, but I was surprised when colleague Tim Lindeman sent me a midnight message identifying the piece as a Bagatelle (meaning "trifle" in French), Opus 126 (No. 4, Presto) - by Beethoven! Our soloist chose to bring out the whimsical nature of the work, which only added to the charm!

After intermission, we were treated to Ludwig Van Beethoven's Seventh Symphony, Opus 92, in A, which the orchestra played with great energy. Maestro Sitkovetsky tried to stay near Beethoven's metronome markings, but the speed sometimes obscured rhythmic details (dotted rhythms in the first movement, carefully annotated sometimes with rests and other times without rests). Among my favorite features in the introduction to the first movement are the canons, the first highlighted by the Maestro as it pitted first and second violins against each other and the other, seemingly ignored from the podium, but not by the trumpets and woodwinds who made the most of it.

The much-loved second movement was actually delivered by Maestro Sitkovetsky at the tempo Beethoven indicated, an Allegretto (quarter note = 76) and not the romantic Adagio that self-indulgent conductors are often wont to impose. The Scherzo almost achieved the impossibly fast tempo Beethoven requested, and the closing Allegro con brio was sparkling, clear and clean. The performance was exhilarating!

The concert repeats on Saturday; see sidebar for details.