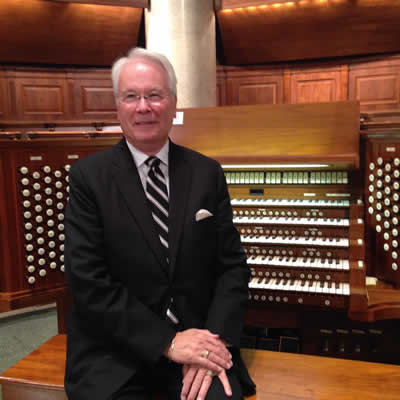 provided by the artist

This preview has been provided by the Central NC Chapter of the American Guild of Organists.

STEPHEN HAMILTON, virtuoso concert organist, has long been prominent on the American organ scene. The New York Times wrote of Hamilton's performance of the Bach Passacaglia and Fugue in C Minor: "Hamilton, as organist at the Church of the Holy Trinity (Episcopal) obviously knew the instrument's sonorous capabilities and brought them powerfully to bear in a rousing account." The Charleston Daily Mail reviewed: "This performance had to be one of the supreme moments of music making in this year's or any other year's Orgelfest offerings."

For the past forty years, such consistent critical review has earned Hamilton acclaim as a thoroughly engaging and popular artist and has firmly established his reputation as a leading and much sought-after personality. Recent performance highlights include concerts in London at Westminster Abbey and Saint Paul Cathedral as well as Merton College-Oxford, Notre Dame Cathedral in Paris, St. Giles Cathedral in Edinburgh, and the Cathedral of Saint James in Regensburg. Among major venues in the United States which have presented Hamilton are Grace Cathedral in San Francisco, the National Cathedral in Washington, D.C., Second Presbyterian Church in Indianapolis, and Columbia University, St. John the Divine, and Saint Ignatius of Loyola in New York City. Hamilton has performed extensively on major instruments in the Twin Cities including the Cathedral Church of Saint Mark, the St. Paul Cathedral, and Central Lutheran Church.

Hamilton gave the world premiere of American composer Kenton Coe's Concerto for Organ, Strings and Percussion at the Festival du Comminges in the Cathedral of Saint-Bertrand de Comminges in the Pyrenees region of France. The newspaper La Depeche du Midi wrote: "The soloist, the American organist Stephen Hamilton, and the Parisian conductor, Jean-Pierre Marty, with the Orchestre du Capitole de Toulouse, gave the work a magnificent performance." As a writer, Hamilton championed Coe's music in his Manhattan School of Music doctoral thesis. Subsequently Part I of that research was published in The American Organist. Additionally, Coe's Fantasy for Organ was recorded at The Church of the Holy Trinity (Episcopal) in New York City and is included in the Great Organs of New York compact disc collection issued by B&V Recordings. He has commissioned and continues to perform other organ works of Coe many of which are liturgically attractive.

In addition to subsequent United States performances of the Coe Concerto, Hamilton has performed the Enrico Bossi Organ Concerto with conductor David Zinman and the Detroit Symphony Orchestra, and the Barber Toccata Festiva with conductor Peter Bay and the Austin (Texas) Symphony Orchestra. He frequently appears with regional orchestras playing concertos of Handel, Albinoni, Hindemith, Piston, Copland, Rheinberger, and Poulenc.

Hamilton has been heard in hundreds of solo recitals and on the nationally broadcast radio programs Pipedreams and Pipes, Pedals and Pistons, WETS-FM. His recitals feature solo works from the standard repertoire as well as ensemble works for organ and instruments. Often in these recitals he enjoys collaborating with local musicians. Additionally he has been heard as collaborative artist with choral ensembles in the concert Requiems of Fauré, Duruflé, Mozart, and Vierne, and Handel's Messiah.

Stephen Hamilton is Minister of Music Emeritus at the historic Church of the Holy Trinity (Episcopal), in New York City, where he conducted the semi-professional Holy Trinity Choir and was Artistic Director of Music at Holy Trinity, the church's subscription concert series for twenty years. The New York Times acknowledges that Hamilton's concert series "is an important venue for week-end presentations" and consistently reviewed the series' presentations.

In addition to his duties at the Church of the Holy Trinity (Episcopal), Hamilton was a member of the artist faculties of Hunter College, Manhattan School of Music, and Queens College. Hamilton is in demand as a clinician for master classes and workshops, frequently lecturing on issues related to church music as well as organ pedagogy, performance, and interpretation. His classes on various aspects of church service playing have been featured at the Church Music Conference of the University of the South and by the publishers MorningStar Music and Augsburg. His church music repertoire classes have been presented at four National Conventions of the American Guild of Organists in Philadelphia, Los Angeles, Denver, and Chicago. The Pipe Organ Encounters program of the AGO has often engaged Hamilton as a clinician and teacher.

Stephen Hamilton now makes his home in Minneapolis, where he is actively engaged in the rich cultural life of the Twin Cities, while concertizing internationally.