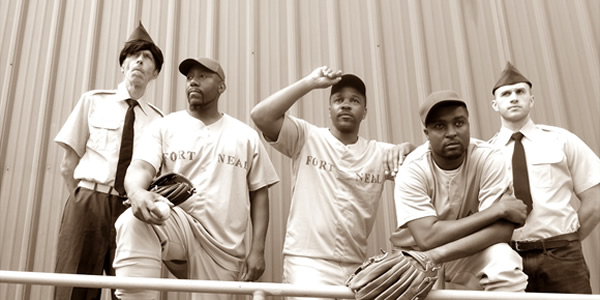 The Justice Theater Project's admirable mission of addressing the needs of the poor, marginalized, and oppressed has not always been matched by its production values and onstage performances. It's gratifying, therefore, to report that the company's presentation of Charles Fuller's Pulitzer Prize-winning work, A Soldier's Play, is one of the company's strongest in recent seasons. An evenly matched cast, a confident director, and a satisfying visual design create a shocking reminder that racial inequalities still persist at levels not so different from those in the story's World War II setting.

The play is set in 1944 at a segregated Army base in Louisiana. Tough African American Sergeant Waters, in charge of a platoon of black soldiers, has been found shot to death. Rumors quickly spread about the perpetrators, from Ku Klux Klan members to white soldiers and officers. Fearing retaliation by the black soldiers, higher ups order an investigation but want it low key. They assign Captain Davenport, a black lawyer with the military police, to check into the situation.

When Davenport reports in to Captain Taylor, the white officer in charge, Taylor is concerned that no one will accept questioning and findings from a high-ranking black officer, the first anyone on the base has ever seen. Davenport, undaunted, proceeds to question Waters' platoon about the sergeant's character and reputation. He finds that Waters was intensely disliked because of his abusive, violent nature. Waters was obsessed with improving the black man's lot (including his own), insisting his men stop any behaviors that might be deemed racial stereotypes and work harder and longer than their white equivalents to curry favor. Davenport fights against prejudices, both black and white, to find the guilty parties.

Fuller's 1981 play explores many themes, from the extremes of racial divides and white men's "good ole boys" protectionism to black self-hatred and struggle for identity. It dramatically reveals the insidious nature of prejudices preserved through lack of interaction and understanding between differing groups of people. The play's timeframe shifts back and forth, employing numerous flashbacks, making it sometimes hard to keep up with the chronology of events. It also feels a little long because many scenes, including Sergeant Waters' monologues and the encounters between Captains Davenport and Taylor, revisit already established background. But the work's unraveling of the murder mystery and its circumstances keeps the audience engaged.

On opening night, this production's cast displayed notable consistency and commitment, providing individualized characterizations astutely molded by director Avis Hatcher-Puzzo. TJ Swann's Captain Davenport projected calm determination and feisty resistance in his search for the truth. His numerous standoffs with Brook North's Captain Taylor were both humorous and instructive, as North perceptively indicated Taylor's difficulty adjusting to a black officer as an equal. Their grudging respect developed convincingly over the course of the action.

Christopher Neill Bailey, Sr. gave Sergeant Waters appropriate harshness with his men and chilling obsession with his private demons. His withering putdowns of what he saw as his platoon's weaknesses were particularly jolting with David Thomas' Private Memphis, whose portrayal of that gentle soul was moving in his frightened reactions to Waters' bullying, and with Moses T. Alexander Greene's fiery Private Peterson, whose quick-tempered pushbacks to Waters escalated threateningly.

The company's current venue, the Umstead Park United Church of Christ's main room, has production challenges, including the long rectangular playing space, limited positions for lighting, and widely stretched out seating. For this production, designer Jeffrey Nugent has created a pleasingly simple and functional stage, with a central raised section depicting the platoon barracks with six bunks and footlockers and a general playing space down front. Two offices with desks, chairs, and flags flank each side of the barracks section, extending the stage in Cinemascope fashion. A large screen above the barracks section is used effectively with projections at the beginning and end of the show.

Rose Davis' lighting is best when at its brightest and when individual actors are spotlighted center stage. Captain Taylor's office on the audience's right is very brightly lit, but the opposite office for Captain Davenport is unnecessarily dark and shadowy in the several interview scenes that occur there. Some scenes in the barracks are brightly lit, but others are too dim for maximum clarity.

Director Hatcher-Puzzo's staging is generally clean and clear. Because of the extreme width of the audience seating, with all the rows flat on the floor, there are several major scenes in which much of the audience cannot see the actors well because the staging has not taken the sight lines into account.

Despite these liabilities, the production is involving because of its engaging cast and sympathetic direction. Its thought-provoking messages are unfortunately still very timely and need repeating regularly.

A Soldier's Play continues through Sunday, October 29. For more details on this production, please view the sidebar.