Baroque & Beyond Provides Pleasure from the Classical Era 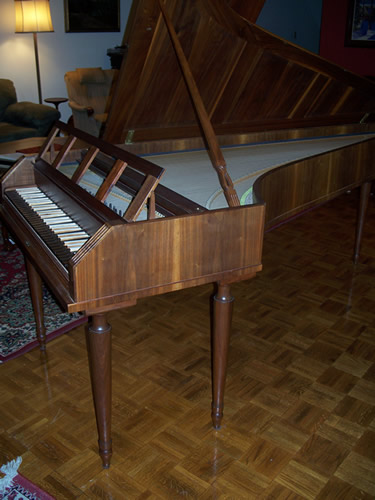 Baroque & Beyond opened its 11th Concert Season at the Chapel of the Cross in Chapel Hill Sunday afternoon. The program featured music by classical era composers to be performed on the fortepiano, a transition instrument between the harpsichord and the modern piano. The instrument featured on this program was a hand-made replica of a 1784 Andreas Stein made by David Dutton. The Viennese crafted instruments that were favored by Mozart early in his career. The strings are thinner than piano cables and the hammers are covered in leather. The instrument has a brighter, almost crystal sound, yet is warmly mellow, especially in arpeggio passages.

The artists appearing in the concert were pianist John O’Brien who has been on the faculty of East Carolina University since 1985, serving in various roles including as Professor of Accompanying. Violinist Leah Peroutka performs regularly on both modern and Baroque violin in a number of local chamber ensembles. She is on the faculty at UNC-Chapel Hill as a lecturer in violin and chamber music, and she teaches privately at her home in Chapel Hill. Cellist Stephanie Vial, performs regularly on both period and modern instruments. As a chamber musician and soloist, she has worked with many of the country's leading period instrument ensembles. She is currently an adjunct faculty member at the University of North Carolina at Chapel Hill.

The program began with Mozart's spritely Sonata in A, K. 305 which was composed in 1778 after he left Salzburg in search of new employment. The first movement opens with a quintessentially Mozartian melody, based on the A Major triad and is developed through shifting keys, some minor, but never losing the bright, happy feel. The second movement, a theme and variations format, provided opportunities for solo displays. The sparkling pianoforte gave support to the contention that Mozart had this instrument in mind when he wrote this piece.

The Trio in G for piano and strings, K. 496 was composed some eight years later when Mozart was 30. The Marriage of Figaro was premiered in the same year and had met with great success and acclaim. The solo piano leads off with an almost operatic flourish with the violin joining in and the cello providing a bass line. The middle section begins with all the instruments fortissimo and then the cello begins a lively conversation. It was unusual at this time for the cello to be treated as an equal to the other instruments in a trio. The Andante movement unfolds with complex harmonic changes and the depth of mature Mozart. It was one of the highlights of the concert, played with precise ensemble and expressive interpretation.

The third movement is a theme and variations on a stately Gavotte. The fourth variation introduces a rather somber element, but at the end, Mozart returns to the overall cheerful mood of the piece.

After the intermission, we heard the 2nd and 3rd movements of Anton Kraft's Sonata in G, Op.1, No. 2. Kraft was an accomplished cellist for whom Haydn wrote his Cello Concerto No. 2 in D. He played in the Esterhazy Orchestra from 1778 to 1790 and was Haydn’s pupil.

The Adagio movement was a lyrical cello solo with pianoforte accompaniment giving Vial the opportunity to warmly woo the audience. The Finale - Rondo, Allegretto is a playful parody on Haydn's well-known theme from the Surprise Symphony (No. 94 in G). It was a delight and brought a few chuckles from the audience.

Haydn's Trio in A, Hob. XV:18 is one of a dozen or so Haydn wrote and published during his second stay in London (1794-95). It is a good example of Haydn's late trios with the same elegance and sophistication as the last set of London Symphonies composed during the same timeframe.

The trio begins with three firm chords and then launches immediately into a flowing line sustained through the whole movement with a remarkable amount of harmonic freedom. The Andante movement rolls along through a minor episode and ends back in A Major then, without pause, proceeds directly into the Allegro Finale. Syncopation and chirping grace notes contribute to the lively spirit of the movement, and it proceeds to a joyful and playful end.

The fine artists played with knowledgeable interpretation and enthusiasm. The heavy humidity of the afternoon and the gut strings of Baroque instruments made for some tuning challenges, but the artistic skill and ensemble excellence made for a delightful and charming concert, and the audience applause was a full measure of the pleasure it derived.