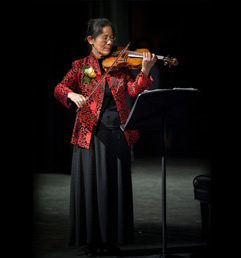 This preview has been provided by Duke Music.

Hsiao-mei Ku is a Professor in the Department of Music at Duke University and a member of the Ciompi Quartet. In addition to her world wide performing career with the Ciompi Quartet, she has further developed her research/performing interest related to her own heritage- the Chinese culture. Ku's two solo CDs, Violin and Piano Music by Ma Sicong (I) and (II), were released by Naxos.

Ku made her debut at age seven and began her professional training three years later at the Central Conservatory in Beijing. After coming to America, she received her Master of Music degree with distinction and was a recipient of the Performer's Certificate from the School of Music, Indiana University. Since 1999, Ku has held the post of Visiting Professor of Guangzhou Xinghai Conservatory and leads groups of students to China each summer as part of the Duke Engage Program.