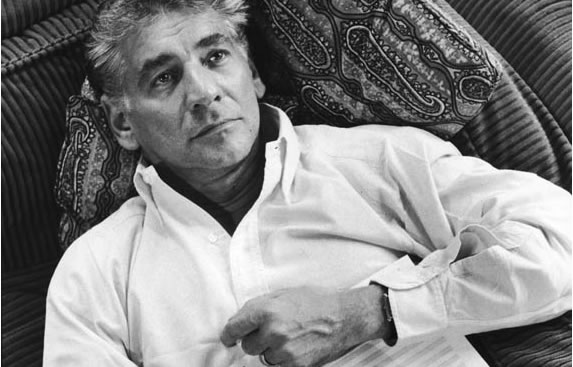 Courtesy of Bernstein at 100 through Chamber Music Raleigh

Imagine if you will, a program of Beethoven string quartets with the composer's beloved nephew onstage, or perhaps one of the nearly two dozen children of J.S. Bach on hand describing life with papa between selections from his Well-Tempered Clavier. While of course that is clearly impossible and sounds quite absurd, a nearly sold out audience at the SECU Auditorium in the East Building of the North Carolina Museum of Art experienced an event that is comparable.

Chamber Music Raleigh kicked off their 2017-18 season with a program called Anniversaries for Lenny, a performance unlike anything else and most likely will not pass this way again. This is one of the early entries into what will most certainly be an avalanche of concerts celebrating the centennial of the birth of Leonard Bernstein (1918-1990). Often called "the composer of the twentieth century" it is a delightful surprise, even for ardent fans, that there are still many works of his that remain unknown to most. For the most part, this was a program of relatively brief piano pieces, called "anniversaries," that were written by Bernstein for his family, friends and musical colleagues. Lara Downes, Artist in Residence at UC Davis, was the pianist, and joining her was Alexander (Alex) Bernstein (b. 1955), the second of the composer's three children.

During the entire afternoon both Lara and Alex kept coming back to the description "communicator" as one of the key words in describing all facets of the composer's life. It is quite fitting that both of these artists were especially articulate, passionate, and precise in their stories about Lenny. The first piece was a sort of anniversary to himself titled "The Story of My Life." Lara played it with a beautiful and calm introspection, and Alex described it as a perfect musical depiction of his father's "private side and quite place." There followed "anniversaries" for his wife Felicia both before they were married in 1951 and her birthday early in their marriage. A lovely photo was displayed of the entire young family at the piano and it seemed that Alex was nearly imperceptibly caught up in the emotion of the moment. Two of his dearest musical colleagues, Aaron Copland and Lukas Foss, were also honored with these little vignettes that were unabashedly derivative of both the dedicatee's and Bernstein's works.

We then watched a fascinating short video showing the composer along with Duke Ellington discussing something they both strived to attain: the decategorization of music. Ellington famously said that "there are simply two kinds of music, the good kind and the other kind..." Bernstein may have been the first, and certainly the most famous, classically trained composer to even acknowledge the intrinsic worth of all kinds of music and even laud The Beatles, much to the chagrin of the musical "elite" of the time.

The first half ended with an embrace to the soul of all listeners: a simple but profound arrangement of "Somewhere" from West Side Story. Lara already showed off her prodigious technique, but the tenderness in this performance brought out the tears, although some just internally. An added bonus was a wonderful photo of Lenny under the West Side Story marquee on Broadway.

While perhaps not immediately apparent, Alex has inherited many of his father's physical characteristics, and the more that sunk in along with the spectacular music being played, the more it felt like he was channeling his father, and we were all witness to a very special experience. Both he and Lara spoke a great deal about the composer's love of teaching, philanthropy, and outreach to anyone who would listen.

The tables were turned a bit as Lara played two brief but wildly virtuosic pieces written to honor Lenny. First was "Anniversary for Lenny" by John Corigliano, Jr. whose father was concertmaster of the New York Philharmonic from 1943-1966. Blink and you'd have missed "Exuberance" by Israeli composer Shulamit Ran. This Bartók-inspired miniature dazzled the audience as Lara tossed it off with gleeful nonchalance.

Alex then told a very personal account of his father's withdrawal from the world after his wife (Alex's mother) Felicia's death in 1978. The three children (Nina, Jamie and Alex) convinced him to take a trip to Jamaica, and it was there that an impromptu, late night playing by Lenny of Gershwin's "Rhapsody in Blue" brought him back to life. This story led to Lara's stunning performance of her solo abridged version of this masterpiece, perhaps the first successful melding of jazz and orchestral music.

Following that was a very informal Q and A session that, quite unusually, preceded an even less informal session that would take place in the lobby. Most of the questions were thoughtful and respectful, some silly (what was your father's favorite color?), and Alex answered them all, not ducking anything but also not elaborating much. One interesting segment was his take on the epic failure of 1600 Pennsylvania Avenue, a musical that didn't even approach its expectations. Alex put most of the blame on the book.

The official program ended with an example of why only music is capable of expressing the inexpressible. From the composer's early musical On the Town, Lara played, with soulful reverence, "Some Other Time." With a mixture of nostalgia, regret and even some despair, these words don't do it justice, yet we all knew what Lara and Leonard Bernstein were trying to tell us.