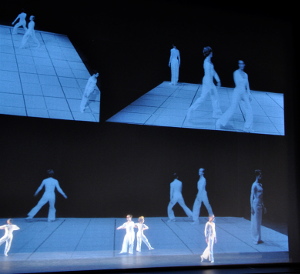 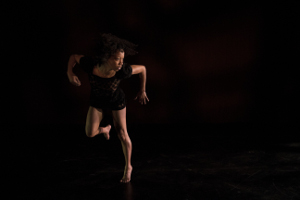 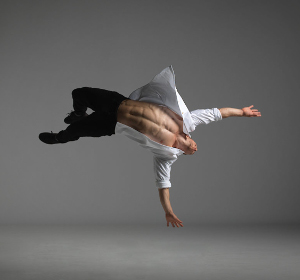 One of the coolest programs every year at the American Dance Festival is Footprints, in which the six-week students in the ADF School dance in a combination of new works and re-creations of older ones, keeping them alive in new bodies. There is no way to know in advance of the first night what the program will be like – you have to go. This year's selection includes two beautiful works by Lucinda Childs, who received the ADF/Scripps Award in a touching ceremony before the dancing began on July 25.

The award is for lifetime achievement in choreography, and Childs is a most worthy recipient, having made more than 50 dances of surpassing elegance since she founded her company in 1973. Deeply eloquent in their purity of pattern and perfection of motions in space, her dances must have come like a clean dawn into the minds of the student dancers, who would not have encountered anything like it in contemporary work. Eight dancers, all in black, performed the 1993 Concerto (set to music by Henryk Gorecki) with grace and apparent joy, moving cleanly through the interchanging patterns, light and buoyant. This work opens the Footprints program, and it by itself would make a trip to Reynolds Theater for the program's repeat worthwhile. Stay for the second half, and see a section of Childs' 2013 Kilar (music by Wojciech Kilar). Also beautiful, it was not quite as satisfying because it was not the complete work, but still ravishing in its incisive kinetics and sharp black costuming.

The other three dances on the program premiered on the 25th. This is the very heart of the American Dance Festival: the support of dancemakers. Not only does the ADF give a nice statuette and a $50,000 check to a choreographer with a long career, it gives time and space and dancers to younger choreographers to support their growth. At Footprints, this often means that we get to see dances with lots of bodies, because – hey, the choreographers can afford them, since they are freely available and line up to audition for the work that hasn't even been made yet. (If you've been wondering why there are so many solos and small casts in local dance productions, think about the money.)

These new dances, naturally, say something about the zeitgeist, and as we all know, it is a troubled one. Gesel Mason's You Don't Say… is adolescent and boring in its whininess and not very thoroughly thought out visually or kinetically, but it certainly speaks (literally) to our contemporary problems with interpersonal communication, and it has some smashing passages of super-energized dancing.

Shay Kuebler's and Gregory Dolbashian's works – annex 7-25-17, and HiveMind, respectively – are both amazing large-cast pieces set to contemporary music mixes. Both deal, in sometimes similar ways, with a subject particularly well-suited to dance: the relation between the individual and the group. Kuebler's piece is quite a bit darker in its evocation of mob power but utterly thrilling in its sure command of the entire stage space as its dancers wheel and slice through the escalating encounters (the sound also increases – you may want your earplugs for part of this dance). It sounds the tocsin, warning against the terrible prospect of fascism but you may not hear the warning until you replay the work in your mind because it is so exciting to watch. David Ferri's excellent lighting, full of foreboding and menace, and Sarah Thea's smart costuming increase the impact.

Dolbashian's HiveMind is far more humorous and generally sweeter – but it, too, has a sting. Again, Ferri's lighting and Thea's inventive, subtle costumes make important contributions to the piece. In a hive, there's not the kind of brutal competition for power that Kuebler focuses on, but there is a no-exceptions rule that the survival of the hive supersedes the value of any single life. In a way, Dolbashian has gone straight to the end result that is still under contention in Kuebler's piece. Yet humans are not insects…, are we? This is a really smart work. It seduces the viewer with the honey of humor, but it leaves one with a throbbing welt to think on. Ask not what your hive can do for you: ask what you can do for your hive – before you become another dead bee on the ground. Here's hoping this is just the first work by Dolbashian to be presented by ADF.

This program repeats 7/26. For details, see the sidebar.

The 2017 ADF season will close with a truly amazing event. The three parts of Bill T. Jones' Analogy: A Trilogy will be performed by his company on successive nights, July 27-29, culminating with the brand-new part, Analogy/Ambros: The Emigrant, commissioned by the ADF. Outside the theater last night, Jones told me that even he has never seen all three parts together. He also said that some presenters are considering, now that the work is complete in its parts, showing the entire thing at one go! That is a dizzying prospect, and I suspect the work will benefit from some breathing space between segments, as it will have here. Bill T. Jones is one of the great intellectual artists of our time, and this is an unprecedented opportunity to see what perhaps will be the capstone of his virtuosic career. Click here for details. But in the meantime, as noted, Footprints repeats July 26. It may be the only program ever presented at ADF in which less of the dancing takes place barefoot than in shoes or sockfeet.