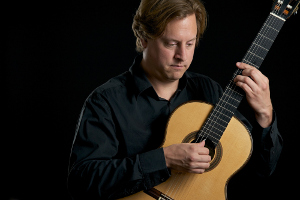 What happens when two Argentinians and an American meet on stage? Sounds like the beginning of a bad joke, but the first half of the Eastern Music Festival's chamber music concert on Monday was exactly that: Latinos Astor Piazzolla (1921-1992) and José Luis Merlin (b. 1951), and the American, John Corigliano (b. 1938).

Antonio Vivaldi is not the only person who wrote The Four Seasons – so did Piazzolla: The Four Seasons of Buenos Aires (1969-70). Performing the work were guest artist violinist Anne Akiko Meyers (who wowed the audience Saturday night in the Samuel Jones concerto), cellist Neal Cary and pianist Marika Bournaki.

The music of all four seasons is never far from the sound of a Parisian café situated in Buenos Aires. Not surprising, since Piazzolla grew up learning jazz in New York City, studied in Paris, and returned to his birth country later in life. Often the mood changes schizophrenically from slowly unfolding to crazy fast dance rhythms.

"Spring" began with a rhythmic vitality, clearly from south of the border, but the middle section featured a doleful cello solo, exquisitely played by Cary. Meyers had a turn with the tune – also stunningly presented.

Bournaki laid down a characteristic rhythm at the beginning of "Summer," and the string instruments eventually joined in. The middle section of this season was lazy and languid.

Corigliano's Lullaby for Natalie came into existence when Meyers' husband asked the composer to write a lullaby in honor of their first child in 2010. Meyers told the packed house, as she patted her stomach, that the piece was a "push present." The violinist describes the work as "one of the most gorgeous, lush, beautiful lullabies." Accompanying Meyers was the Grammy award winning guitarist Jason Vieaux in a "world premiere" arrangement (the original was written for violin and piano).

This is indeed a gorgeous piece and a marvelously intimate arrangement, perhaps the best of the lot because of the tenderness of the two instruments. The gentle performance completely mesmerized the audience.

Vieaux returned to the stage to perform Merlin's Suite Del Recuerdo (Suite of Memories). He told the audience that he first encountered the score (before it was published) in 1992, and he has enjoyed playing it for the last 25 years. He explained that each of the five movements hails from a different region of Argentina.

The composer dedicated the piece "to the memory of the thousands of 'disappeared ones' from the time of the military junta in Argentina." Vieaux is a complete master of the guitar; it is simply a tool he uses to convey the essence of the music – flamboyant, introverted, festive, or gloomy – all played with complete authority. He used lots of rhythmic flexibility without sacrificing an overall sense of direction. The crowd was clearly moved.

Piazzolla's "Fall" and "Winter" concluded the first half of the concert. Again, Bournaki played solidly, incorporating some hauntingly beautiful effects with the una corda pedal. Cary offered both soulful cello as well as raucous rhythm with Meyers, whose pace and intonation were impeccable.

The second half of the evening was given over to a single composition, the 1865 Horn Trio in E-flat, Op. 40 by Johannes Brahms (1833-1897). The musicians: Nigel Armstrong (violin), Kevin Reid (horn), and William Wolfram (piano).

The opening Andante clearly laid out the distinct sounds of the three instruments, all of which were equal partners in the music making. Wolfram was a sensitive accompanist to the two others, although he certainly could take the lead when called on, when his playing caught fire. Armstrong's solid playing was clean throughout, with spot-on intonation. Reid brought forth a rich, lusty sound from the horn.

The extroverted Scherzo surrounded a slower, more brooding middle section. The Adagio mesto began with rolled chords from Wolfram leading to a haunting tune shared by the horn and violin. I could have used a bit more violin in the impassioned passages, but maybe the string instrument is no match for an open-lid piano played fortissimo. The Finale was really fast, bursting with energy. All three musicians pushed the tempo to the limit, resulting in an exciting conclusion.

The Eastern Music Festival continues through the month of July. See our calendar for what lies ahead.