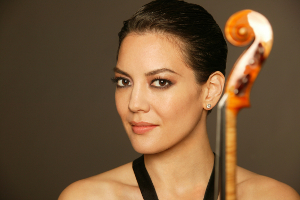 One of the high points of living in the Piedmont Triad area of North Carolina is the super-abundance of high quality artistic experiences. But nothing tops the quality of the Eastern Festival Orchestra, the professional arm of the Eastern Music Festival which inhabits the Guilford College campus for six weeks each summer, with its 200 orchestra students and 50 more instrumental soloists and conductors. The fourth concert of the 2017 season presented world-famous Anne Akiko Meyers performing the public premiere of Samuel Jones' Violin Concerto. The orchestra also excelled in works of Manuel de Falla and Richard Strauss.

Having now listened to Jones' Concerto for Violin four times, thrice on-line and now live in the remarkable performance by Anne Akiko Meyers under the masterful direction of Music Director Gerard Schwarz, I find it charming, even beyond its immediate accessibility and appeal. Indeed, for most of the packed house in Dana Auditorium this was the only hearing of the work receiving its first public performance. Yet they loved it, standing and cheering both the phenomenal soloist and the composer as he made his way to the stage to acknowledge the ovation.

Not infused with sorrow as Alban Berg's Violin Concerto (dedicated to the "Memory of an Angel") nor burdened with Celtic folk songs as Max Bruch's, nor brooding as Sibelius', nor ethnic as Ernst Bloch's, the Jones' work is uncomplicated – tonal and appealing on first hearing. Rejecting both atonality and minimalism, the work nonetheless has a broad program – the development of the Artist through the fervent application of Hope, Faith and Love.

The most recent of several Samuel Jones' works to be commissioned by Charlie and Benita Staadecker, civic leaders and philanthropists from Seattle who were present at this performance, this concerto was first presented to the public ear by the All Star Orchestra in 2015, pending its public premiere at the Eastern Music Festival. Conceived in the usual three-movement format with the traditional fast - slow - fast scheme, the first movement begins with pulsating tympani underlining an intriguing mixed chord which includes both a major and minor third. I listened for a further exploration of that chord but only heard it reiterated at the end of the movement. The cadenza, based on the restless searching motif heard almost at the beginning of the concerto, was a fine foil for Meyers, who has a gorgeous rich tone and infallible intonation. My only wish would have been to hear her part more clearly over the large orchestra.

The second movement, beginning with a gentle pealing of a bell, is unabashedly romantic, and like the first movement, written in three beats per measure, but at a much more leisurely pace. The bell peals again signaling a more technically challenging counterpoint for the violin with well-controlled flying spiccato passages and a long series of double stops and voluptuous portamenti, while the lower strings played the lyrical cantus firmus.

Ever since Mendelssohn and Paganini added the phrase "moto perpetua" to the musical lexicon, composers have been challenged to write them – perhaps most successful is the last movement of Samuel Barber's Violin Concerto which packs well over 2000 notes into a four-minute movement. The influence of "perpetual motion" enters into the final movement of this concerto with a first brief "testing of the waters" followed by a whole-hearted immersion – exciting stuff, indeed! Gradually from the rising scale emerges a romantic melody whose memorable tail-end becomes the focus of the rest of the movement. It is a lovely section bearing a haunting (and fitting) resemblance to Rodgers' and Hart's 1939 hit, "Falling in Love With Love."

The concert opened with the three very popular segments comprising the Second Suite extracted from Manuel de Falla's ballet, El sombrero de tres picos (The Three-Cornered Hat) written in 1919 for Sergei Diaghilev's Ballets Russes. From the start, the orchestra was in fine fettle, impeccably together and well-balanced, responsive to Maestro Schwarz in subtle detail. In the Miller's Dance the famous horn entrance and ensuing English horn solo were excellent as was the powerful ending. And the entire orchestra was impressive in the Final Dance (Jota), abounding with typical Spanish "horizontal hemiola," the juxtaposition of 6/8 and 3/4 meters.

After intermission, we were treated to an outstanding performance of Richard Strauss' Ein Heldenleben (A Hero's Life), the culmination of the youthful composer's predilection with the form of the tone poem, of which he had composed eight by the time he was 34! Written in six segments tied thematically together and played without pause, the 40-minute work uses a very large orchestra, which with the double harp section (four harps!) was made even larger for this performance.

There was such fine playing and so many outstanding solos that it would take a page to list them. Strauss' style of composition allows for many fragments to be inserted into the musical fabric, sometimes snippets from other compositions, almost like leitmotifs, and not unlike a precursor of the techniques used in musique concrète.

The Hero's Helpmate (spouse) was given voice by the solo violin, exquisitely played by concertmaster Jeffrey Multer, who celebrates his 20th year at EMF this season. Strauss comments in the score how the solo should be played, corresponding to the mercurial nature of his own wife, Pauline: sweet, warm, loving, scornful, angry, forgiving, harsh, etc. I only wish Multer had gone a bit farther with the nasty descriptions instead of the burnished warm tones he produced.

The audience rewarded the orchestra and conductor with a lengthy and well deserved standing ovation.

The day before performing the premiere of the Samuel Jones Violin Concerto, Meyers listened to three young EMF violin students and gave them advice about the violin and how to make themselves more effective musicians. The masterclass was given in the Sternberger Auditorium, a black-box theater on the campus of Guilford College, in front of a hundred students and auditors of all ages. Masterclasses are free and open to the public.

First we listened to Mayson Lane (18, Ft. Scott, KS) play the third movement of the Violin Concerto No. 3 by Camille Saint-Saëns. In her comments, Meyers tried to get Lane to "open up." When asked whom the concerto was written for he answered "Sarasate," and she asked him if he thought Sarasate had character, and what must he have been like. "Get mad!" "Show some joie de vivre – it's not 'paint-by-numbers'." "Anybody can play notes; but they are not interesting. Go for it!" And he did, much to the delight of the audience.

He was followed by Savannah DeLillo (18, Rio Rancho, NM) who played the first movement of the Mozart Violin Concerto No. 5 in A, K. 119. After complimenting her, she mentioned that her own teacher, Dorothy DeLay, had a favorite expression "It's carrots!" for something that occurred unnoticed and needed to be worked on – sort of a bad habit. And she pointed out that Savannah's vibrato had become an entity in itself, detached from the tone and from the music, often starting up after the note (_____^^^^^^^^^ ). Meyers suggested she play without vibrato and yet with great expression, noticing everything in her playing, which she did. Then she asked about metronome use and for the second time in the afternoon told a student to stop using the metronome. "Ban the metronome! It's causing you to make accents you don't want!" And she suggested strolling around the room while practicing – "It makes you aware of your body's relationship to the music; aware of your breathing, which should happen when the music breathes."

The third student, Joshua Facello (15 from Durham, NC) played the familiar Mendelssohn Violin Concerto. Though he seemed less advanced in his knowledge of the piece, he appeared to be a quick study and responded to her instruction with almost immediate results. After a passing negative comment on the particular edition he was learning from, she suggested he always find original editions, untainted by others' ideas of bowings and fingerings. Then she asked about the second theme area, if he had thought about what was being conveyed. She then took up her violin and played the long passage in question, reflecting out loud as she played. "Why did he leave me… I still miss him… I'll get over it… I'm ready for that drink now…" Then Joshua played it and it was astounding how expressive he had become. Spontaneously, the audience erupted in delighted applause, and Joshua himself seemed surprised.

I have heard three violin masterclasses this summer and all three spoke variants of the same messages – hyper-attention to detail and expressivity by virtue of an interior scenario. How revealing!