Choreography and Conducting by Mark Morris at ADF 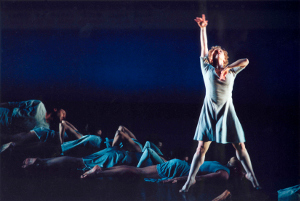 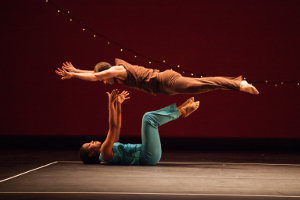 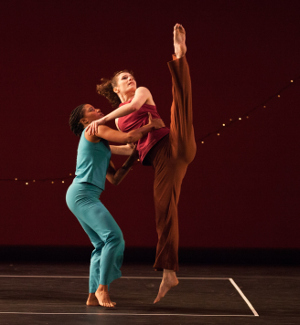 The American Dance Festival has been presenting a number of interesting dance-theater works this season, along with more traditional programming. Some of these topical, political theatrical works have included very little dancing, leaving some viewers with a deeper thirst that even two nights of Paul Taylor couldn't slake. If you are among them, and weren't in the Durham Performing Arts Center on the 21st, tonight's repeat concert by the Mark Morris Dance Group, with the Durham Symphony and the North Carolina Master Chorale, will go down like a big glass of ice tea.

Make that a big glass of tea by a shaded lake. The evening opens with cool deliciousness: A Lake, with ten dancers, set to Franz Josef Haydn's Horn Concerto No. 2 in D. Mark Morris has his company perform only with live music, and his entourage includes the MMDG Music Ensemble. But for this celebratory 40th year in Durham, ADF brought in the Durham Symphony, with Morris conducting to his company's tempo and style; and the DSO sounded very good, with Tanner West giving the horn both a cheerful gleam and at times, a nostalgic glow. The dancers frolicked through the three movements, in an easy parade of vacation pursuits – swimming, sunning, flirting, dancing, becoming light and birdlike at water's edge. One of the things that is so charming in Morris' style is the way he draws from various more or less formal group dances, and snippets from a courtlier time, danced with modern attitude, appeared in this work. The pleasures of A Lake were only increased by the snug white knee pants on the men, and the petticoated frocks of the women, and James F. Ingalls shady glade lighting.

Following this came some more clever, lively play, set to Samuel Barber's Excursions for the Piano (Op. 20, IV, III, II, I), performed on stage by MMDG Music Ensemble pianist Colin Fowler. The six dancers in Excursions make forays from a small taped-off stage area within the larger stage. It sounds too literal to be good, but it works. Morris is deeply musical, and his choreography, whatever else it may get up to, expresses the underlying forms, textures, colors and feelings of the music in dance, thereby creating a deeply fulfilling sense of wholeness and artistic unity. Seeing this happen with such very different music as the Haydn and the Barber makes one aware of the scope of Morris' aesthetic. Whereas with the Haydn, the dancers glided and skipped, with the Barber they bopped and popped, ragged and modulated, massing and spacing in unusual ways, and most delightfully, shooting out unexpected extensions of arms and legs.

After intermission, the DSO returned to the pit, along with the NC Master Chorale, and a soprano and a mezzo from the Mark Morris Musical Ensemble, Sarah Brailey and Luthien Brackett, and once again, Morris himself conducted for the performance of his great Gloria (1981/1984) set to Vivaldi's Gloria in D (RV589). All the greatness of the Morris style and of the dancers are well displayed in this work. Morris likes sturdy dancers – no one ever looks attenuated or androgynous – and their spirits seem as robust as their bodies. Backs are perfectly straight, the rib cages lifted, the chests proudly expanded, the shoulders square and stalwart, and the chins are generally held just a tiny bit above level. They can get into and out of the floor with no apparent effort, and they can rise above it just as easily. For the Gloria, Morris uses all the space, not just on the stage floor, but in the air. It was very moving to see these ten magnificent bodies dragging themselves across the floor, stumbling and struggling, hoisted, suffering, dying, and also rising weightless as spirits as they leapt. This is not a literal telling of the passion and resurrection, but somehow it is all in there: Christ and his followers, his mother and the other women, the triple godhead. There were a number of trios and quartets that evoke the Holy Trinity and the cross-based quatrefoil, but the most beautiful moment to me came when two female dancers began a duet at the same instant the soprano and mezzo began to twine their voices. A spiraling motif also repeated throughout, most dazzlingly in the solo of fast turns by Lesley Garrison.

The grandeur of the dancing, and its integration with beautiful music well-played and sung, made for a completely satisfying night at the American Dance Festival. Note that the Saturday evening performance begins at 7 p.m. See our sidebar for details.