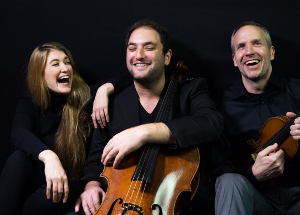 A new piano trio, The Mile-End Trio, has been formed by experienced musicians associated with the Eastern Music Festival. Pianist Marika Bournaki has been with the EMF for two seasons. Violinist Jeffrey Multer has been the concertmaster of the festival's all-faculty orchestra for twenty seasons, while cellist Julian Schwarz, a former festival student in 2008, is in his fifth season as a faculty member. Multer has been the festival's coordinator of faculty chamber music programing for six seasons.

How ensembles come up with their names is often serendipitous. This trio was rehearsing in Bournaki's native Canada on a street named Mile-End. Thus, their moniker.

There was a very good turnout of music lovers for a midweek concert in Dana Auditorium on the campus of Guilford College. An over-the-top, fun piece by Paul Schoenfield (b. 1947) was sandwiched between first trios by Ludwig van Beethoven (1770-1827) and Johannes Brahms (1833-97).

The monetary influence of the growing market for sheet music intended for performance by amateurs is reflected in Beethoven's Piano Trio in E-flat, Op.1, No. 1. The composer added a scherzo to what had been a traditional three movement structure. The opening Allegro is in sonata form and juxtaposes an upward rushing broken chord melody (suggestive of the showy "Mannheim Rocket") with a gentle and sober one. The singing line of the Adagio is enlivened with some of the composer's rhythmic and harmonic surprises. The animated Scherzo is followed by an exuberant Presto finale bursting with brusque humor.

Bournaki's extraordinary pianism was evident from her refined control of articulation, dynamics, and color from the opening bars. She brought an almost Mozartean elegance to this early Beethoven piece. Her balance with her string colleagues was ideal in this and throughout the concert. Schwarz brought a full, rich sonority to the cello part. Both he and Multer phrased masterfully and maintained superb intonation.

Café Music(1986) by Paul Schoenfield (b. 1947) was commissioned and premiered by the St. Paul Chamber Orchestra. The piano trio version is justly popular on the programs of many touring ensembles. The composer writes "my intention was to write a kind of high-class dinner music (that) might also just barely find its way into a concert hall." Snatches of it reflect "early 20th century American Viennese, light classical, gypsy, and Broadway styles." It is in three movements: Allegro, Rubato: Andante moderato, and Presto. Schoenfield reports Brahms' Violin Sonata in A is evoked in the slow movement while fragments of Gershwin's "Summertime" and Richard Rodger's "Bali Hai" pop out of the tapestry of the hell-bent-for-leather rush of the finale.

Bournaki, Multer, and Schwarz pulled out all the stops for Schoenfield's evocation of the composer's moonlighting as part of a versatile restaurant trio. Here were chunks of stride piano, deep pizzicato snaps like a jazz bass, or a maudlin torch song high on the violin. It was fun-filled cornucopia of popular music.

Brahms burned large quantities of his early unpublished chamber music before his death. His Piano Trio in B, Op. 8 gives music lovers a rare chance to compare the composer's first thoughts with his final revision. The twenty-one-year-old Brahms composed his first trio in 1854 and it was published in November. Thirty five years later in 1889, the composer reduced the score by 1/3. A new energetic first movement second theme contrasts with the original lyric first theme. The richly polyphonic scherzo was unaltered while few touchups were done to the adagio. The finale's original main theme, flavored by Hungarian folk music, was retained and paired with a new second theme.

Bournaki, Multer, and Schwarz turned in a magnificent, beautifully conceived and executed interpretation of Brahms Op. 8. Balance between keyboard and strings was ideal. Their full, rich string sound blended wonderfully with every sensitive turn of the keyboard. The themes of the opening movement were ideally contrasted. What a wonderful variety of pizzicatos spiced the fleet scherzo! The slow movement gave full reign to Brahms' bittersweet, autumnal vein. The finale surged with barely bridled Hungarian folk rhythms. This was a world class performance.

Music aficionados interested in Brahms' first thoughts for Op. 8 should search for one of the few recordings. The aptly named OPUS 8 Trio's complete Brahms set on Arte Nova included both versions and might be found in used CD shops.