A Night of Vaudevillian Variety with Pilobolus at DPAC 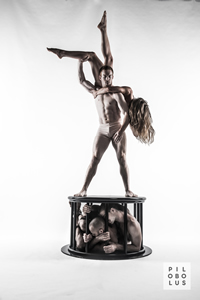 
Pilobolus - On The Nature of Things 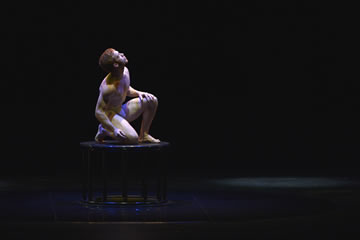 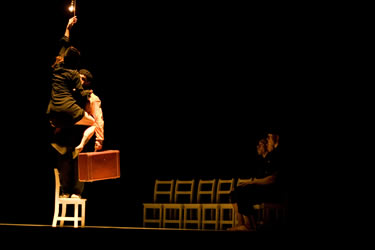 Although formed way back in 1971 (still sounds relatively recent to me), Pilobolus still exudes an aura of freshness and often revolutionary concepts that other dance companies don't even approach. A group of students at Dartmouth created this ensemble aptly naming it for a fungus that propels itself with extraordinary strength, speed and accuracy. Pilobolus has become a favorite at the American Dance Festival (ADF), and they have appeared at nearly all of their summer festivals. This year's performances took place at the Durham Performing Arts Center (DPAC), a perfect fit for a mammoth program that had something for everyone.

Among their other obvious remarkable attributes, Pilobolus, at their inception and continuing to this day, has done something which might not seem like a big deal now, but was quite new to the dance world: they made it OK to be funny, quirky and silly. Before Pilobolus, even modern dance was suffering from the same malady as many classical music concerts: an inability and/or unwillingness to break out of a level of pomposity and seriousness that eventually becomes stifling. It's OK to laugh and smile now, as well as be profound: tonight's performance was a perfect and stunning mix of every human emotion as well as a wonderfully entertaining evening that approached that of an old-fashioned variety show – not meant as a derogatory description.

This remarkable program began with a very brief welcome video that was one of several of these Pilobolus produced films shown between the five main entrees. Then, a uniformly enthralled audience was mesmerized by the stunning On the Nature of Things (2014). Performed by Antoine Banks-Sullivan, Nathaniel Buchsbaum and Krystal Butler, this was a vision of such beauty and quiet power that it approached a transformative experience. While of course it is commonplace, perhaps even mandatory, that dancers have great bodies, the two male dancers had physiques that looked like Greek statues come to life. Then Butler joined them, topless, but instead of using the expanse of the big stage, they entirely confined their dance to a circular platform, no more than three feet in diameter. Accompanied by perfectly selected music and evocative lighting by Neil Jampolis, the three dancers performed within this impossibly small space with nearly incredulous fluidity and variety. This, alone, would have been worth the price of admission, but there was more – much more – to come.

As if the very generous and eclectic published program was not enough, another full-length, full-company dance, Branches, was added. This is a classic example of Pilobolus' use of humor, understated athleticism, and great storytelling combining to create an artistic vision on par with a great silent film. Here we could swear we were in the middle of a forest made even more realistic by a wonderful sound design.

Next (we are still only in the first half) was a world premiere commissioned by the ADF. While that has become commonplace, Echo in the Valley is especially unique. Two of the creators, performing live at this premiere, are the internationally known King and Queen of banjo players, as well as a married couple, Bela Fleck and Abigail Washburn. They are also the composers and arrangers of the music. A simplistic description might be a choreographed version of Coal Miner's Daughter. Again, the four dancers confined themselves to a somewhat limited space as they told the story of the people in a Kentucky mining community. The lighting was very subdued throughout and what little light there was usually came from miner's helmets. Atmospherics and ambience took precedence and dancing, per se, was somewhat limited. Washburn, in addition to her banjo playing, also sang, contributing to a haunting "mountain" feeling.

The variety-show feel started even before the intermission as the lights went up but a video appeared imploring us to "wait before you leave." Then volunteers were recruited to "help build a box!" What came after the break was yet another departure – this time quite a large one – from dance. [esc], yes, that's the title, is from 2013, and if you look at the upper left side of your keyboard you will see the "escape" key. First performed with magicians Penn and Teller, this is basically an homage to the great escape artist Harry Houdini. Six of the dancers engaged in four amazing feats of being bound, locked and trapped, only to miraculously free themselves from their bondage. Emcee'd by a very TV-centric host, this was just pure almost vaudevillian fun, so dance purists beware!

Modern choreographers seem to love chairs. I have seen quite a few works that employ the use of chairs as a central part of their work so that in itself was not that surprising in Rushes (2007), the final work in Pilobolus' magnificent nearly two and one-half-hour program. Six dancers, 12 small wooden chairs: what are the possibilities? There was a little bit of something for everyone here. Athletic leaps, semi-controlled chaos, and a kind of illusion of effortless gliding (somewhat like Michael Jackson's "moonwalk") combined with almost sleight-of-hand manipulation of the chairs to make this a celebration of magic in motion. This was a full-on multimedia event as there was a bit of film animation that was tastefully and intrinsically used within the performance. Just another example that there is nothing that is out-of-bounds for Pilobolus, but whatever they do is organic and becomes essential to their artistic vision. Best of all, for us, was that you never know what to expect, but you can be sure it is pure Pilobolus and unlike anything else.