The Glory of Baroque and Beyond Brass with the EMF Faculty 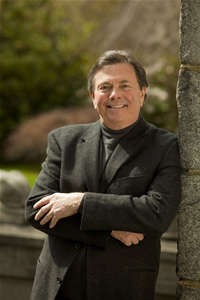 My interest in early music was whetted by recordings of late Renaissance/ Baroque brass music by Michael Praetorius (c. 1571-1612) and Giovanni Gabrieli (c. 1553/56-1612), often exploiting cathedral-like spaces. The siren call of an imaginative musical menu, expertly played by the faculty of the Eastern Music Festival, in the wonderfully resonant space of Greensboro's First Presbyterian Church was irresistible. Despite its midweek scheduling, there was a large turnout of music lovers. Several selections called upon use of the sanctuary organ (6,800 pipes by Orgues Létournea Limtée de Saint Hyacinthe, Quebec, Canada) ably played by John Alexander.

The opening work found an ensemble consisting of a pair of trumpets, French horn, and tenor and bass trombones, performing six dances formed into a suite from the Terpsicore of Preatorius, arranged for modern instruments by Allen Dean. The whole group played the opening appetizer “Ballet de Grenoble.” The remaining works frequently featured the pairs or the horn in introductory duets or solo before being joined by the others. Intonation was immaculate and tone and dynamics were expressively varied.

The next selection was a rare chance to compare the juxtaposition of original solo organ work, three of Eleven Choral Preludes, Op. 112 by Johannes Brahms (1833-97), with brass transcriptions by Brian Fennelly (1937-2015). The ensemble consisted of a pair of trumpets, French horn, and tenor and bass tubas. The chorales were: No.8 “Es ist ein Ros enstsprungen,” No. 4 “Herzliebster Jesu, was hast du verbrochen,” and No. 12 or 11 (?) “Herzlich tut mich verlangen.” Each was played in the brass transcription first, followed by the original played by organist John Alexander.

My initial impression was that Fennelly's brass arrangements were shorter or abridged compared to the “weightier” and slower paced organ originals. There is no way that tubas can match the floor-shaking lower register of the organ. The last selection juxtaposition was the most remarkable. Alexander wove an amazingly transparent tapestry out of the score compared to the transcription which was by no means remotely leaden.

More than once during the next selection, A Suite of Six 19th Century American Brass Band Music by, no doubt Anonymous' cousins, Various – I thought of Charles Ives. The large ensemble brought to mind descriptions of open air band performances on a New England commons. The selections were “Louisa,” “Come Dearest, the Daylight is Gone,” “Listen to the Mockingbird,” “Slumber Polka, “Home Again,” and “Lulu is Gone, Quickstep.” Rhythms were spritely and melodies were well spun. An imp within me mentally toyed with an Ivesian vision, the entire EMF brass from the faculty and both student orchestras arrayed about the space and playing out-of-phase.

After intermission, the first known chamber music specifically for the grouping, Six Pieces for Brass Quintet by Ludwig Maurer (1789-1878) was played. The ensemble consisted of two trumpets, horn, trombone, horn, and tuba. The music is surprisingly lightweight with airy tone and fleet rhythms, very suggestive of the aesthetic of Mendelssohn. Very pleasing.

Brass arrangements of two selections, one from Les Preludes. Book I by Claude Debussy (1862-1918) seemed unlikely on paper. The ensemble consisted of two trumpets, horn, trombone, and bass tuba. It was amusing to listen to the theme of "The Girl with the Flaxen Hair" being taken up by each in turn! However, "Golliwog's Cakewalk" from The Children's Corner took to the reworking like a delightfully clumsy duck to water! No arranger was credited.

The concert ended with a brilliant recreation of what it must have been like to hear performances within the famous St. Mark's Basilica in Venice. Composers exploited its multiple choir lofts with a distinctive polychoral style, exploiting both the space between ensembles as well as having them alternate or echo each other. First Presbyterian Church has two choir lofts at either end of the transept. EMF faculty brass were stationed in both lofts with EMF music director Gerard Schwarz, on a podium at the center of the transept's floor. He led a magnificent performance of four typical works by Gabrieli. The pieces were "Canzon primi toni," "Canzon In double echo," "Sonata pian'e forte," and "Canzon septimi toni, No. 1." The additional weight of the organ was brought to the second and fourth selection. These dazzling and sparkling performances will long resonate in the memories of music lovers.

Here's one vote for an entire evening of Baroque music composed for St. Mark's.