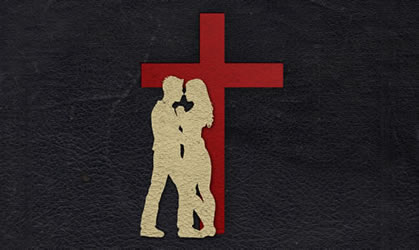 The premiere production of the new Aggregate Theatre in Raleigh took place at Imurj, centrally located below Whiskey Kitchen, downtown. Despite the fact that the show was literally "rained out" opening night, the work had a well-attended run that closed on the evening of June 23. The work chosen by Aggregate's Managing Artistic Director Matthew Hager is a one-act play written by Doug Wright titled The Stonewater Rapture. Wright uses a minimalist cast to set up a conclusion that could only end one way; a combination of wicked persecution and perverted religious belief could have no other outcome.

Only two actors comprise Wright's cast. Whitney (Matthew Hager) is a minister's son in high school, deep in the Bible Belt of Texas. His "girlfriend," if that's what you might call her, is also steeped in religion; Carlyle (Lexie Braverman) lives with her mother, not far from Whitney's home, in the tiny hamlet of Stonewater. She is as indoctrinated as Whitney, with a solid knowledge of her Bible and all the many "certitudes" that have been drummed into her by her mother and a well-meaning congregation.

Both scenes take place in Whitney's living room, a place where Carlyle (though both these students are eighteen) is not allowed unless there is parental supervision. But this evening the folks are out at a church function, and Whitney and Carlyle have just returned from a meeting of the youth ministry, where he has been elected president, and she, secretary. Whitney is dubious; he had prepared a speech (written by his dad) to deliver but was too intimidated by "all those ladies" to give it. Carlyle is excited; there are several changes she'd like to make to the meetings that take place weekly in their church. She is appalled by the fact that people come to the Wednesday night supper "for the food, not the faith," and she wants the attendance for the weekly meeting of the hymnal sing-along to be mandatory for all the residents of the nursing home so not just two people show up!

Carlyle is proud of Whitney for his election, but Whitney is less than enthused; he feels he is unworthy. He is not a good public speaker and, lately, his waking thoughts have been hampered by an overwhelming desire. He doesn't know what to do about it. But he confronts Carlyle about the fact that they have been "seeing" each other for over two months, and they haven't even kissed. Carlyle lets him kiss her, but only if he sits on his hands.

These two kids are hopelessly sunk in their parents' religion; it has been poured wholesale into their brains to the point that it is their whole world. They are both hopelessly afraid of homosexuals, despite the fact that he is rumored to be one. They are both obsessed with sex but too hung-up to do anything about it; she has had a religious dream in which she feels she has been informed she is being singled out for divine rapture, "held for the heavenly host," and she must not let herself be involved in carnal activity. She knows full well what happens to girls who do; she regales Whitney with the story of another classmate, a young girl who must wear orthopedic shoes. On a dare, the captain of the football team got her drunk and seduced her; she is now pregnant. The families have gotten together to arrange to have the fetus aborted, but the girl will not let them kill her baby and is now on the run. Mike McCaffrey has ruined her life!

Fitted into the scene, almost as an aside, is the fact that Carlyle is supposed to decorate a rural bar tomorrow night for a football party from the high school. This quick reference turns out to be extremely important, because what happens that night will dramatically change both their lives.*

Both these actors give exceptional portrayals; despite the fact that both are considerably older than 18, their demeanors and their actions very much reflect their characters' younger ages. Braverman's Carlyle is very much the excited and impetuous teen, despite her strict upbringing. She has the limberness and casualness of youth and a bright outlook for her life. She feels protected by her faith, a shortcoming that gets her into serious trouble. On the other hand, Hager's Whitney is conflicted; he is at war within himself because he fears the constraints of his faith will cause life to pass him by. He is tortured at school because his classmates believe him to be gay, simply because his upbringing has kept him from experimenting in sex like the rest of his classmates. Hager conveys this conflict well, using it to bring his relationship with Carlyle to a head; by the end of scene one, the two have "broken up," and Carlyle leaves with the admonition that she will pray for him and his wicked ways.

Director Jay O'Berski of Little Green Pig brings religion front and center in this production, using a small but well-constructed set of simple pieces and a plethora of religious icons. Most noticeable of these is the huge painting that dominates the set, to the point that it is mentioned in the program: "Jesusize," a painting that focuses on Christ's eyes as though they watch every single movement, peers down on this hapless duo as their hampered desires guide them relentlessly toward their preordained doom. The portrait, both dazzling and unsettling, is by local artist Sophia Lemieux. Maerc Celestini's musical score wins points for enhancing the action but never intruding on it.

Wright knows and understands the hold and the effect religion has on these two young people; he has witnessed it first-hand in his own life in Texas. The strictures and the conflicts that bind these two characters, in combination with the exterior forces that converge on them, make what happens in scene two not only inevitable but also predictable. A combination of the evils inflicted upon Carlyle and the unimpeachable restrictions on how she can react to them make scene two a foregone conclusion. These two young people have expressed their love for each other in scene one. Despite Whitney's conflicts and because of Carlyle's hopeless and helpless belief that she is a "protected" soul, the two are brought back together by the fate to which their imposed religion has bound them. While we watched in horror, scene two unfolded as an unflinching and direct consequence of these two children's restricted lives and the doom inflicted upon them by outside sources. Despite every caution of their parents' admonitions, evil overtakes them, and their futures are sealed. Playwright Doug Wright packs dynamite into a swift, one-hour production that portrays the inevitable result when reality intersects two young lives whose upbringings do not equip them to deal with it.

Aggregate Theatre has given us a wild and savage introduction to its budding theater troupe. Next on the schedule is a combination of Shakespeare and fine dining, slated at the Brewery Bhavana on Sept. 19. For more information, see our calendar closer to the event or go to aggregatetheatre.com.

*We're comfortable giving more plot summary than usual since this run is over and because we trust this play will at some point be revived here.

Note: For more information about this play and the company, read their preview.