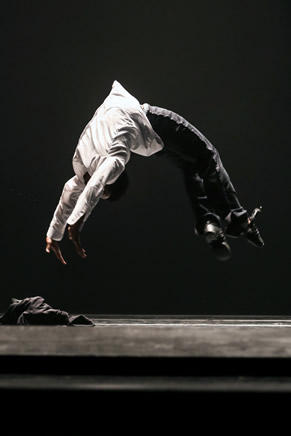 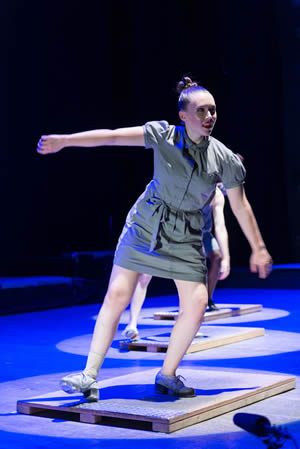 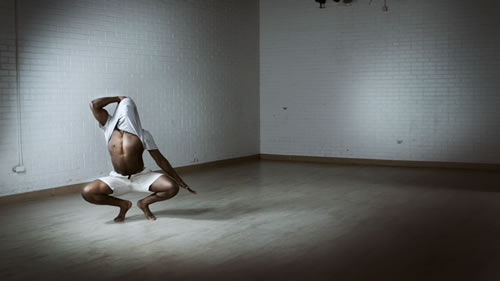 Although there have been some performances already in this American Dance Festival season, the official opening night took place at the Durham Performing Arts Center on the 15th. It was an all-North Carolina party, marking the ADF's 40th year in Durham and honoring the lives of two men no longer with us who have been crucial to the ADF's vitality. The spirits of the late great dancer-choreographer-peacemaker Baba Chuck Davis, and the late Dr. Allen D. Roses, who led the ADF board for many years, were celebrated in speeches and by the very full house of dance lovers of every age, color and condition. From infants in arms, to elders with walkers, we were all there to revel in the power and the glory of dance, and the artists who make it.

The dancing opened with a delightful welcome by the children of the recent ADF Pilobolus Shadow Camp. Conducted by Edwin Olvera and Gaspard Louis, the playful shadow dance was set to "Happy" by Pharrell Williams. Backlit behind a large screen, the children frolicked through a series of animated images with a Durham theme, some of them surpassingly clever and all of them performed with amazing accuracy. It was a fantastic example of the great outreach (and future dancer/audience creation) done by the ADF locally. Hard on the heels of the darling children came Chapel Hill-native tap dancers Elizabeth Burke and Luke Hickey, who had both gotten their starts in the great North Carolina Youth Tap Ensemble and have gone on to careers in tap dance. Their fabulous dances paid tribute to their mentor from the NCYTE, Gene Medler, and while dancerly, pointed up the music-making aspect of tap. Their second piece, danced to "It Happened in Monterey," performed by the Oscar Peterson Trio, was particularly satisfying as the vibrant pair clicked and stomped in and out of the jazz, right on the money every time.

Raleigh's Carolina Ballet presented a pretty work in the classical mode, choreographed by the company's artistic director Robert Weiss and co-artistic director Zalman Raffael. Commissioned by the ADF, Dialogues is set to Sergei Rachmaninoff's Variations on a Theme by Frederic Chopin and plays with the idea of artistic give and take, influence and appropriation. The music was well-played from the pit by pianist Suzanne Polak, and there were some lovely passages in the dance, which emphasized with its choreography the fluidity of the artistic process, and with its costumes of several colors, the intermingling of ideas and approaches in a conversation. Although neither as long nor as complex, Dialogues recalled Weiss's fine dance Symposium in its dancing examination of thinking. Marcelo Martinez and Margaret Severin-Hansen danced particularly well.

JoyeMovement Dance Company from Greensboro presented a decidedly un-pretty work for solo male dancer, Fit the Description. I was very impressed with the degree of control evidenced by the choreographer, Alexandra Joye Warren, the text-writer Hashim Warren, and the dancer, Emmanuel Malette, in this tell-and-show piece based on Hashim Warren's many (number 11 forced the creation of this work) experiences with the police. Always innocent, he has been picked up/harassed/threatened by the police from a young age, in different cities, with different looks – but he always, they said, "fit the description." This disgustingly common story is so enraging that to be able to distill it into art is quite a feat. With my preference for movement over speech in dance works, I would have preferred that the dance be the more dominant component, rather than an illustrative element, especially since the movement was very interesting. Perhaps this young company, as it garners resources, will be able to marshal more dancing bodies into its storytelling.

Durham's own African American Dance Ensemble presented a glorious excerpt from Mendiani (Dance of Celebration), in honor of its founder and everyone's hero, Chuck Davis, and of the ADF's 84th year. It seemed particularly splendid, even among all the years of splendor, and the drumming was as potent as it could be. It was far too short – even a full program of the AADE feels too short – one wants the blood-bubbling drumming to go on and on (and I could watch Stafford Berry, Jr. kicking those long legs up to the heavens pretty much forever). I think Baba Chuck would have been happy to see row after row of the audience tumbling into the parade of high-stepping dancers as we, together, trooped out for intermission, following Chuck's most frequent command: Peace, love, respect – for everybody.

The evening closed with a knock-out performance by the Charlotte Ballet of Ohad Naharin's Minus 16. The company performs not only classical ballet, but also a range of contemporary repertoire with equal dynamism. This long, complex and madly active work by the creator of Gaga style includes some of the most unforgettable images in contemporary dance, and the company handled it with panache and precision. From the opening elastic-fantastic solo by Maurice Mouzon, Jr.; through the chilling-thrilling section in which the dark-suited dancers in a semi-circle of folding chairs puff out their white-shirted chests as the motion ripples through them; to the capture of audience members to dance onstage; to the final intense action in which one thinks arms and legs may come flying off, it was all spectacularly done, and drew shouts, cheers and multiple standing ovations. This was the company's final public performance under artistic director Jean-Pierre Bonnefoux, who shaped the former North Carolina Dance Theatre into its current gorgeous form during his 20-year tenure: his dancers gave him a magnificent send-off and put the icing on the cake for the American Dance Festival's 40th Durham birthday.

Note: This was a stand-alone program with no repeat.