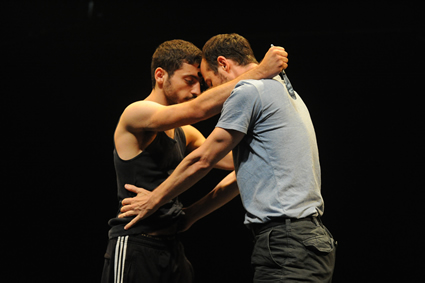 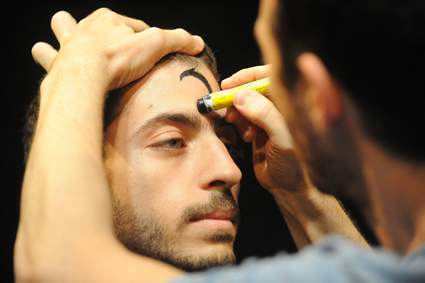 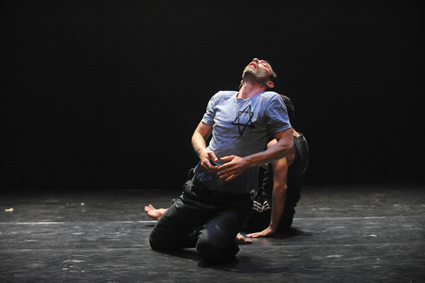 The times they are a-changin' at the American Dance Festival. Under the directorship of Jodee Nimerichter, adventurous programming has leapt the bounds of Durham: for the first time, an ADF performance was presented on the 13th at the Cary Theater. The sweetly renovated theater, with around 180 seats, is an excellent venue for small-scale live performances, as well as the films that are the theater's mainstay. Israeli choreographer Hillel Kogan's We Love Arabs will repeat there on the 14th, before appearing in Reynolds Industries Theater at Duke on the 16th and 17th.

Although, generally speaking, I am no fan of stand-up comedy or talking in dances, We Love Arabs won me over. It goes beyond cleverness, and the movement is at times amazing. There is very little dancing, per se, but We Love Arabs is an unusually well thought-out work of dance-theatre.

The schtick (think Woody Allen, babbling and repeating himself) involves a Jewish Israeli choreographer wanting to make, with an Arab Israeli dancer, a work about peaceful coexistence. Initially, it seemed yet another insular, self-referential, self-congratulatory bit of fashionable identity politics, but after the set-up, its slyness and its sincerity both emerge.

Kogan plays the choreographer; Adi Boutrous plays the dancer being auditioned. Kogan's volubility is, blessedly, balanced by Boutrous' near-silence, his one-word answers dropping like pebbles into the torrent of Kogan's words. As Kogan tries to explicate his ideas for the peace-promoting dance, he reveals his own ignorant underlying assumptions about Arabs – even though he claims for himself a liberal Left politics. The further along the piece gets, the more clearly we see that he is lampooning a whole range of well-meaning people and philosophies, as well as some of the more absurd aspects of art-making (which often has in common with legislation a certain sausage-making quality).

I cannot really describe the piece without giving away too much – a great deal of its affect comes from its surprises. I longed for more dancing. There is just enough fabulous Gaga-style movement to seriously whet the appetite: while I was not satisfied as a dance-lover, I was engaged intellectually. The sequence late in the piece in which the two men help each other across an imagined river is extraordinary in its grace and strength. The work also contains some very unexpected and powerful images, and some very ridiculous carryings-on involving hummus that turn out to be extremely meaningful. In the end, you see that this comedy is the shimmer on the surface of a deep pool of thought.

Warning: If you do not wish to become part of the final scene, do not sit in the front row.

Please see the sidebar for information on repeats of this presentation.