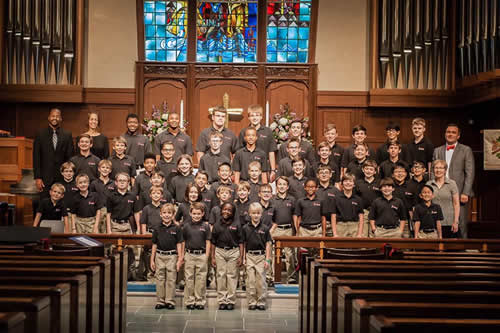 Wrapping up a successful 49th season, the Raleigh Boychoir's spring concert at St. Michael's Episcopal Church did not disappoint. Although this was the last North Carolina performance of the season, RBC's Performing Choir is still preparing for an upcoming summer tour in Washington D.C. Artistic Director Jeremy Tucker also highlighted the exciting venues and guests in store for the Boychoir's monumental 50th anniversary season beginning Fall 2017. This exemplifies a major theme of RBC: celebrating the past (and present) while looking ahead to the future. There was an additional milestone this season, too – the organization graduated its first senior students from the Young Men's Ensemble. The two graduates, Grant Little and Brendan Nemecek, who have been in RBC's ensembles for 7 and 10 years respectively, were honored in a ceremony during the concert. The two were described as leaders, and their success spoke volumes of the leadership and growth program that RBC's four tiered ensembles can be.

To open the concert, the four combined choirs sang Ken Berg's "Join the Song," a lilting, Irish-inspired anthem that showcased the singers' strong sense of harmony, especially in the refrain. The Young Men's Ensemble (the highest level ensemble for changed voices) presented a set of contrasting pieces. Leavitt's explosive "Festival Sanctus" was followed by Ramsey's even gentler "Canst Thou Love Me, Lady?" which was impeccably unified through the singers higher and lower ranges. Both selections really showcased the level of technique that these young men have achieved.

The Training Choir was next. At the beginning of their RBC experience, they are directed by Vicki Oehling. Their diction was well done in "Shenandoah," which was accompanied on the piano by Performing Choir member Marcel Pietrus. The following rendition of Bach's "Lord God We Worship Thee" had a strong unison sound as well as dynamic variation.

The Resident Choir, with director Danny Yancey, is one of RBC's smaller ensembles. (Many members of the Training Choir are graduating into it next season.) Nevertheless, they demonstrated refined technique. Singing Handel's intricate vocal lines can be challenging, but "Let My Heart and Soul Praise the Lord" was sung with unified tone. The Performing Choir (conducted by Tucker) continued the Baroque trend with "Et Exultavit" by Vivaldi, which contained even more difficult ornamentation sung in unison. Ramsey's "Sing to Me" became a highlight of the concert, phrased intently with deep, rich vowels by the Performing Choir.

A special guest ensemble was also included in this concert – the Oak Grove Elementary Otter Singers, directed by Kenya Snider, performed a heartfelt set with an impressive number of members. Together with the Performing Choir, they sang Tom Shelton's inspiring "One Voice," full of moving harmonies and suspensions. Soloists Alexa Shipley and Marcel Pietrus communicated the meaning of the text well, and violinist Sam Stage (of the Young Men's Ensemble) echoed the vocal phrases. To conclude the afternoon's music, the Performing Choir and Young Men's Ensemble combined to perform two staples of choral repertoire – Z. Randall Stroope's "Omnia Sol" and John Rutter's "The Lord Bless You and Keep You." These were both well done, full, and resonant. Overall, the performances given in this concert certainly indicate an upcoming season that should not be missed.

Biography information on the staff at Raleigh Boychoir can be read here.