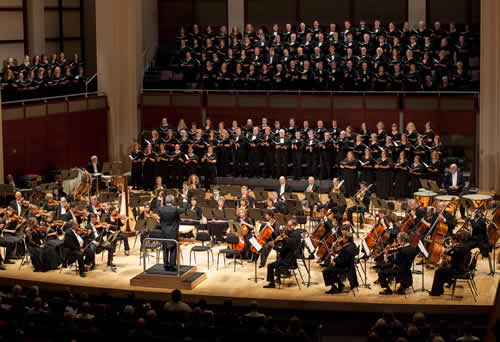 One hundred years and one day after the United States declared war on Germany in 1917, the North Carolina Symphony, the North Carolina Master Chorale, and the Raleigh Boychoir joined forces to commemorate the beginning of World War I through Benjamin Britten's War Requiem. Less than 24 hours after the US ordered airstrikes in Syria in retaliation against the use of chemical weapons, this performance of Britten's condemnation of the horrors of war felt tragically and disturbingly relevant.

Under the confident baton of Grant Llewellyn, the 200+ musicians approached the weighty piece with respect and sensitivity. Britten wrote the requiem for the consecration of the Coventry Cathedral, which had been built next to the ruins of the original structure that was destroyed during the 1940 Luftwaffe. One of the most brilliant points in this work lies in its unusual structure. The requiem service is one that is familiar to both Catholics and to Classical music lovers, but Britten intersperses the traditional Latin text with bitter and poignant poems written by Wilfred Owen during his service in what was then termed the Great War. Owen was killed a week before the armistice – a fact that makes his poems even more powerful. The parallels between the text of the mass and the poetry are sometimes obvious, and sometimes subtle. The "Offertorium" features some of the most poignantly intertwined English and Latin text, exploring the themes of sacrifice and pride through the story of the sacrifice of Isaac. The result is provocative, yet full of grief – a powerful artistic representation of the human cost of conflict.

There are several inherent difficulties with presenting a work of this size. One is the unavoidable distance between musicians. Due to the physical space between the choirs and the orchestra, some problems of disconnect and pitch detracted from the overall effect in the first few moments of the 90-minute work. However, issues improved considerably as all of the performers adjusted to the space. The NC Master Chorale occasionally seemed out of their comfort zone; whether or not it was the challenge of adjusting to a less-familiar conductor (Alfred Sturgis serves as their music director) or merely reflecting less acquaintance with the composer's style was not clear.

Despite these minor troubles, the emotional impact of the piece readily overcame the logistical obstacles. Britten's characteristic understatement makes for comparatively few tutti sections, which makes for many tender, sorrowful moments offset by a few overwhelming and powerful sections. One example was the stunning contrast between "Dies Irae" and the tender "Lacrimosa" sections of the work – a moment that was deftly highlighted by the Chorale.

Nicholas Phan took on the challenging tenor solo part with vulnerability and passion. While is his expressive interpretation of the impetuous and angry character of his text was moving, Phan's ethereal upper register was responsible for some of the most breathtaking moments, especially in the "Angus Dei." Stephen Powell sang the contrasting baritone role. The baritone solos reflect a wiser and darker perspective on the experience of war; a character that was tastefully reflected in Powell's richer timbre and more restrained interpretation. Tamara Wilson served as the third soloist on the concert. She took a more operatic approach to her part, which served her well as she intertwined her soaring melodies with those of the NC Master Chorale. Despite their excellent efforts towards clear diction, it was a struggle to understand each of the three soloists at times; the acoustics of the hall and the large forces involved made it quite difficult, if not impossible, to be heard clearly.

The youngest members of the massive collaborative effort hailed from the Raleigh Boychoir, led by Jeremy Tucker. While some parents and grandparents were disappointed with not being able to see their choristers, the placement of the choir on the top level of Meymandi resulted in a heavenly, yet eerie effect that underscored their role in the piece.

The orchestra is divided into two sections for this work, featuring a chamber orchestra as well as a larger group. Both sections performed admirably, but the chamber group, consisting of many of the principles of the orchestra, was one of the highlights of the evening. This requiem requires both a delicate and a ponderous touch in the percussion, features powerful brass sections, and includes a lot of transparent writing that ruthlessly exposes any timidity on the part of the players. The NC Symphony rose to the challenge, underscoring the various vocal solos and ensembles while maintaining their own voice and interpretation.

Whether or not you agree with Britten's pacifist stance, this powerful exploration of the human costs of war is something with which all of us can connect. You still have an opportunity to see this infrequently performed work, so check out our calendar for details.